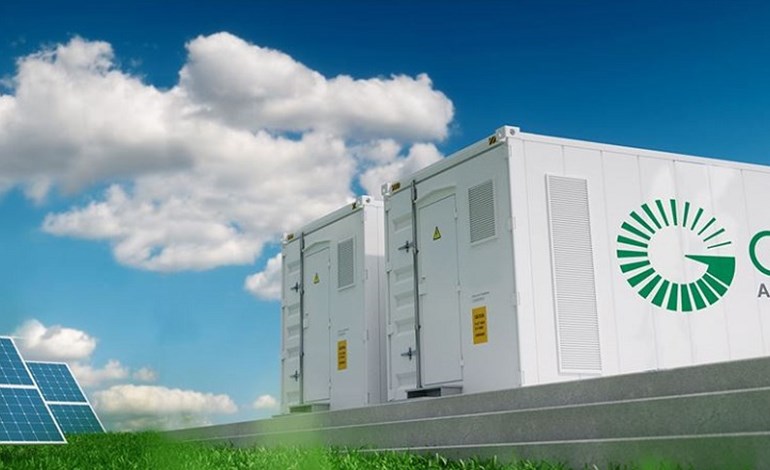 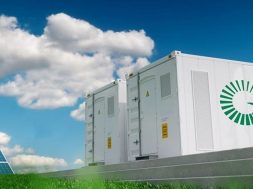 London and Kinshasa : – The Democratic Republic of the Congo (DRC) can leverage its abundant cobalt resources and hydroelectric power to become a low-cost and low-emissions producer of lithium-ion battery cathode precursor materials. At the behest of UN Economic Commission for Africa (ECA), Afreximbank, the African Development Bank (AfDB), the Africa Finance Corporation (AFC), the Arab Bank for Economic Development in Africa (BADEA), the African Legal Support Facility (ALSF), and the UN Global Compact, a new study by BloombergNEF (BNEF) on a unified African supply chain estimates that it would cost $39 million to build a 10,000 metric-ton cathode precursor plant in the DRC.

Emissions associated with battery production could be cut by 30% compared with the existing supply chain that runs through China, if cathode precursor materials (the intermediate material between raw and finished cathode material) were produced in the DRC, with Poland handling the production of cathode materials and cells, and Germany the final pack assembly. This is due to the DRC’s proximity to cathode raw materials and heavy reliance on hydroelectric power plants.

“The DRC’s cost competitiveness comes from its relatively cheap access to land and low engineering, procurement and construction, or EPC, cost compared to the U.S., Poland and China,” said Kwasi Ampofo, lead author of the report and BNEF’s head of metals and mining. “European cell manufacturers currently rely heavily on China for battery precursors. However, the raw materials for batteries are, in most cases, imported into China from Africa and refined before being exported to Europe. Automakers in Europe can lower their emissions by shortening the transport distance and capitalizing on the DRC’s hydroelectric powered grid and proximity to raw materials.”

Electric vehicles represent a $7 trillion market opportunity between today and 2030, and $46 trillion between today and 2050, according to the new report, “The Cost of Producing Battery Precursors in the DRC”, launched at the DRC-Africa Business Forum 2021 taking place today and Thursday. While there are notable leading electric-vehicle and cell manufacturers today, the sheer scale of growth expected in the coming decades means that there is inherent uncertainty over which companies and countries may come to dominate this new value chain. African countries could play a major role in the lithium-ion battery supply chain by taking advantage of their abundant natural resources and onshoring more of the value chain.

James Frith, head of energy storage at BNEF said: “For regions to successfully attract battery component or cell manufacturing they need to have either a supply of key raw materials or local demand for batteries. If they have access to raw materials, they can use this supply to attract downstream manufacturers. If they have local demand for batteries cell manufacturers will move to the region to be close to their customers, particularly in the automotive industry. Africa has a wealth of critical battery raw materials and is in a position to use these to attract more value-add in downstream processing and manufacturing.”

The African Continental Free Trade Area (AfCFTA) is a free trade area covering 54 African Union nations, which came into force on 30 May 2019 and effectively went operational on 1 January 2021. The AfCFTA agreement has the potential to create the largest free trade area in the world. If approached correctly, African countries can capitalize on their abundant natural resources, growing demand for vehicles and rapid urbanization to build a global hub to produce electric vehicles.

“We are only at the beginning of the path to achieving net-zero emissions globally. Emerging economies in Africa can gain significant long-term economic value by quickly setting up projects that support the low-carbon transition with transparent governance frameworks,” stated Ashish Sethia, global head of commodities at BNEF. 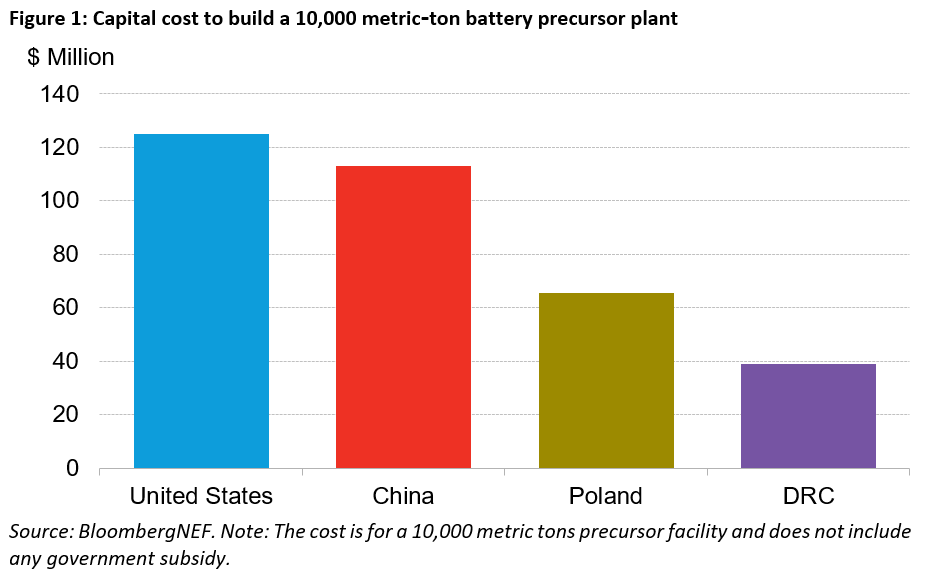 “We are into the Decade of Action and with only 9 years left to deliver on the SDGs. The Africa Continental Free Trade Area, the largest trading bloc globally, provides a compelling case for the Democratic Republic of Congo to leverage its and Africa’s abundant mineral and clean energy resources to become a growth pole of the global clean energy transition and inclusive resilient development that leaves no one behind,” said Vera Songwe, UN Under-Secretary General and Executive Secretary of the United Nations Economic Commission for Africa (ECA).

“The DRC produces about 70 per cent of global cobalt but captures just 3 percent of the battery and electric vehicle value chain. With a functioning AfCFTA, the DRC can receive other upstream mineral inputs needed for lithium-ion batteries – such as manganese from, say, South Africa and Madagascar, copper from Zambia, graphite from Mozambique and Tanzania, phosphate from Morocco, and lithium from Zimbabwe, to name but a few.”

“The DRC can truly become the regional and global centre of gravity for the production of precursor materials for batteries to drive the fourth industrial revolution. In so doing, the country and the rest of Africa can extend their access from the USD271 billion battery precursor segment to the more lucrative USD1.4 trillion combined battery cell production and cell assembly segments of the battery minerals global value chain.

This requires plenty of reliable and affordable power, which can be achieved by connecting Africa’s power systems with the Grand Inga at the core and with wind and solar power from North African countries, the Sahel and South Africa, geothermal from East Africa, hydro from Central and West Africa,” Songwe continued. “But, to reap these benefits, African leaders must make the commitment to facilitate the needed investments and make the AfCFTA deliver for the continent.”

The President & CEO of Africa Finance Corporation, Samaila Zubairu said: “Africa must benefit meaningfully from its abundance of energy transition metals by changing the extraction model. Unlike previous price booms, African countries need to move up the value chain through mineral beneficiation, smelting and refining, and move away from exporting unprocessed commodities.”

“As substantiated by the BloombergNEF report, the prospect of the expanding the value chain of development of lithium-ion batteries and electric vehicles value chains to DRC and Africa is both financially and environmentally appealing,” commented Dr. Sidi Ould Tah, Director General of the Arab Bank for Economic Development in Africa (BADEA).

“BADEA stands ready to mobilize its own resources to finance investment projects around this critical value chain in DRC and around the continent. We are also eager to mobilize our partners from the Arab Coordination Group, as well as from public and private investors from the Arab countries,” Dr. Sidi Ould Tah further noted.

African Development Bank President Dr. Akinwumi A. Adesina said: “The BloombergNEF report reinforces what we have consistently advocated. Africa’s mineral resources must be utilized for the development of the continent. That requires a radical change from dependency on the export of raw commodities, with very little or no value addition. Manufacturing battery precursors will add value to our mineral resources, grow renewable energy technologies, accelerate industrialization, light up and power Africa and create jobs for millions of young Africans.”

“The study confirms the cost competitiveness of establishing a battery precursor industry in the DRC based on local mineral resources. For the Africa Legal Support Facility (ALSF), such information is valuable for negotiating fair and equitable contracts that ensure that Africa retains maximum value from her mineral resources, while also contributing to the global energy transition,” said Olivier Pognon, Director & CEO of ALSF.

About the UN Economic Commission for Africa (ECA)

Established by the Economic and Social Council (ECOSOC) of the United Nations (UN) in 1958 as one of the UN’s five regional commissions, ECA’s mandate is to promote the economic and social development of its member States, foster intra-regional integration, and promote international cooperation for Africa’s development. Made up of 54 member States, and playing a dual role as a regional arm of the UN and as a key component of the African institutional landscape, ECA is well positioned to make unique contributions to address the Continent’s development challenges. ECA’s current mission is to deliver ideas and actions for an empowered and transformed Africa; informed by the 2030 Agenda and Agenda 2063.

African Export-Import Bank (Afreximbank) is a Pan-African multilateral financial institution mandated to finance and promote intra-and extra-African trade. Afreximbank deploys innovative structures to deliver financing solutions that support the transformation of the structure of Africa’s trade, accelerating industrialization and intra-regional trade, thereby boosting economic expansion in Africa. The Bank has a rich history of intervening in support of African countries in times of crisis. Through the Pandemic Trade Impact Mitigation Facility (PATIMFA) launched in April 2020, Afreximbank has disbursed more than US$6.5 billion in 2020 to help member countries manage the adverse impact of financial, economic, and health shocks caused by the COVID-19 pandemic.

A stalwart supporter of the African Continental Free Trade Agreement (AfCFTA), Afreximbank has completed the development of a Pan-African Payment and Settlement System (PAPSS) that was adopted by the African Union (AU) as the payment and settlement platform to underpin the implementation of the AfCFTA. Afreximbank is working with the AU and the AfCFTA Secretariat to develop an Adjustment Facility to support countries in effectively participating in the AfCFTA. At the end of 2020, the Bank’s total assets and guarantees stood at US$21.5 billion, and its shareholder funds amounted to US$3.4 billion. Afreximbank disbursed more than US$42 billion between 2016 and 2020. The Bank has ratings assigned by GCR (international scale) (A-), Moody’s (Baa1) and Fitch (BBB-). The Bank is headquartered in Cairo, Egypt. For more information, visit: www.afreximbank.com. Follow us on Twitter | Facebook | LinkedIn | Instagram

About the African Development Bank Group

AFC was established in 2007 to catalyse private sector-led infrastructure investment across Africa. It is the second highest investment grade rated multilateral financial institution in Africa. AFC’s approach combines specialist industry expertise with a focus on financial and technical advisory, project structuring, project development and risk capital to address Africa’s infrastructure development needs and drive sustainable economic growth. AFC invests in high-quality infrastructure assets that provide essential services in the core infrastructure sectors of power, natural resources, heavy industry, transport, and telecommunications. The Corporation has invested over US$8.7 billion in projects in 35 countries across Africa since inception.

The Arab Bank for Economic Development in Africa (BADEA) is a multilateral development bank owned by eighteen (18) Arab countries, members of the League of Arab States (LAS). The Bank has been operational for the last 45 years with footprints in about 44 countries. BADEA aims at promoting economic development in Africa and fostering cooperation between the beneficiary countries and the Arab World through investment and trade. To this end, BADEA’s operations revolve around four strategic pillars: i) Infrastructure investment, ii) Private sector and trade financing, iii) Agriculture value-chains, iv) Entrepreneurship and SMEs. In addition, capacity development weighs in as a cross cutting pillar.

Created by the African Development Bank in 2008, the ALSF supports governments in negotiating complex commercial transactions, providing legal and technical assistance in public-private partnership projects across the oil and gas, mining and energy sectors, and covering sovereign debt issues and creditor litigation.