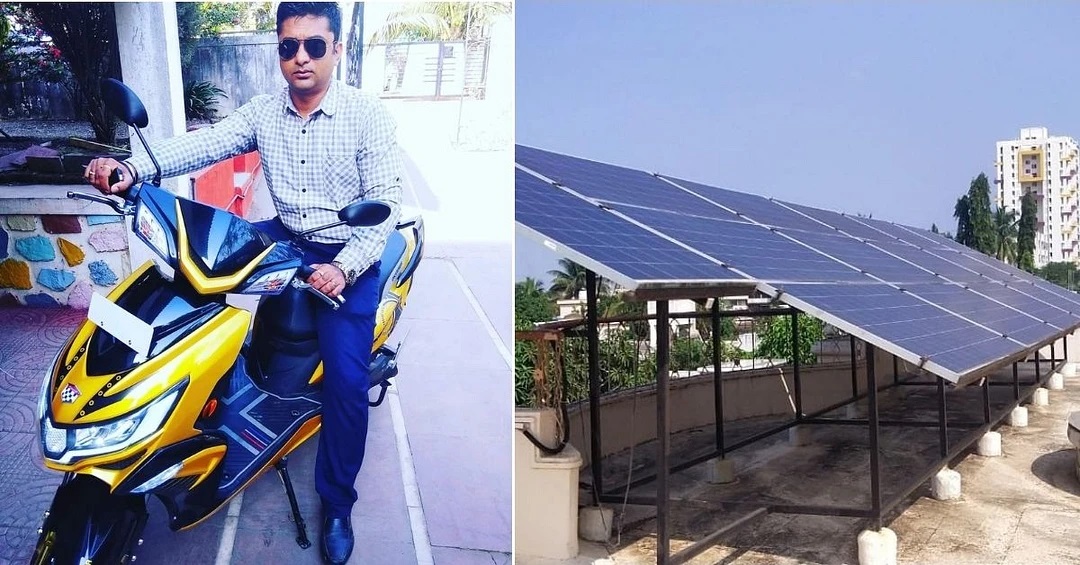 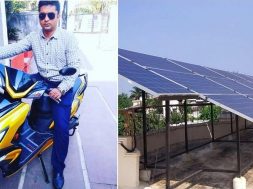 Pune-based Abhishek Mane and his five-member family have been using solar power to charge all their home appliances and e-vehicles for the last four years.

In 2004, Abhishek Mane, a resident of Pune decided to quit his job at the Ministry of Defence and start a business of his own. With his deep concern for the environment as well as his interest in technology, he decided to venture into a business that manufactures and installs solar panels.

“I spent several years learning about solar energy, how to instal panels and harness energy. I also worked closely with people in the solar industry to learn how the panels are manufactured,” says Abhishek. He launched his business, Deeva Solar Power Solutions, in 2015 with his sister Deepali Shinde. A manufacturing unit to make the solar panels and other necessary parts was also set up in Pune.

But apart from launching a business related to solar energy, Abhishek also installed several panels to power all the appliances in his home. To date, kitchen appliances, the television, washing machine, and water pumps, as well as vehicles such as cars and bikes are powered by solar energy. “For a family of four adults and one child, our electricity bill was a minimum of Rs 5,000/ month. Now, we pay Rs 70/ month,” says Abhishek.

Early in 2016, Abhishek decided that if he was running a business that sold solar energy material, then he should believe in the product himself. So he spoke to other members of his family and explained to them that their house would become environmentally-conscious if they switched to solar energy.

“The change was gradual. We did not do it overnight. Initially, we spent a few months consciously reducing our energy consumption. From ensuring we turn off the lights when necessary to rationing the amount of water we use, our family slowly made big changes in our behaviour,” says Abhishek. He also identified appliances, such as the refrigerator, that were consuming a lot of energy and switched to a version that consumes less.

Once the family agreed to the switch, Abhishek installed 10 panels of 250 watts to produce 2.5KW of energy every day. This system was directly connected to the grid and a battery that stores energy, which the family uses to charge their electric vehicles and power appliances at night.

“In 2019, we removed a few panels and added 330 watts panels, and now the system produces 7KW of energy every day. We added the extra panel so that we could charge the car,” says Abhishek.

The energy is stored among four lead-acid batteries that have a capacity of 12 V & 200 AH. It is supplied across various appliances and electrical outlets through inverters.

Switching to a greener life

To ensure a seamless use of energy, the family prepared a schedule. During the day, when there is direct sunlight, they would use heavy appliances such as the washing machine, water pump, other kitchen appliances to finish their chores and charge one EV. Then, the batteries are given a few hours to charge, and at night, the stored power is used to charge the other two scooters.

“The Okinawa electric scooters take four hours to fully charge and can go up to 100 kilometers. The electric car, Mahindra e2o, is charged every three days, as the usage is lesser compared to the scooters. While petrol prices are as high as Rs. 98/ litre, I feel comforted knowing I spend less than 40 paise every km and pay only Rs. 70 as my electricity bill,” says Abhishek.

It has now been four years and the family continues to use only solar energy for all their needs. Abhishek says that many people fear the conversion to electric vehicles because of range anxiety. But, he believes using EVs is like using a smartphone.

“If you want to use it the next day, charge it at night,” says Abhishek, adding that through his company, Deeva Solar Power Solutions, he has helped more than 500 households go green.