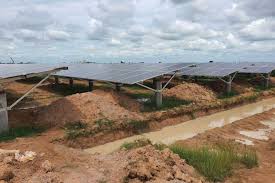 A 30MW solar power station located in Pursat province’s eastern Krakor district has been connected to the national grid as it enters its testing and commissioning phase.

The project is part of the government’s plan to boost the Kingdom’s clean-energy portfolio to 450MW by the end of 2022.

Keo Rottanak, the director-general of State-run electricity supplier Electricite du Cambodge (EdC), on Tuesday told online news outlet Fresh News that the solar power plant had been commissioned by the EdC to be connected to the national grid in Sna Ansa commune.

“The plan will accelerate the development of energy supply for next year, especially for the dry season, and is part of the commitments of the government and the EdC to increase the percentage of renewable and clean energy.”

Victor Jona, director-general of the Ministry of Mines and Energy’s General Department of Energy, told The Post on Tuesday that the project entered its testing and commissioning phase just after construction was completed “in mid-September”.

“The inclusion of new solar power in the national grid will give EdC even greater levels of excellence in the energy sector,” he said.

He added that with the efforts of the relevant authorities, he expects more new solar power plants to be put into operation in the future, mainly concentrated in provinces such as Kampong Chhnang, Pursat, Battambang and Banteay Meanchey.

JinkoSolar, the world’s largest producer of solar panels, said in January: “These particular panels have an average module efficiency of 20 per cent and are suitable for areas with high heat and humidity.”

From 2006 to the end of last year, investment in the electricity sector was worth a total of $6.1 billion, reflecting the increasing demand of the energy sector in recent years, the ministry reported.

Demand for electricity is growing at an average of 16-18 per cent annually, except from 2018 to last year, which saw a 25 per cent growth, it said.

The Kingdom can generate about 70-80 per cent of total electricity consumption, with the remainder met by imports from neighbouring countries, it added.