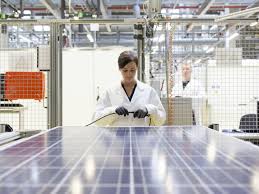 Announced in July this year, the scheme separates modules into three specific categories based on the volume of carbon emitted per kilowatt within the entire lifecycle of the product. Only modules in the highest category – featuring emissions of less than 670kg CO2/kW – are eligible for government subsidies.

However Chinese manufacturers have complained, arguing that they have found themselves placed in the lowest category based on an update issued previously by Korea’s New and Renewable Energy Centre (NREC), which stated manufacturers based in China would be placed at ‘Level 3’ owing to purported concerns over site assessments during COVID-19.

Last week, Hanwha Q CELLS said it was the first solar manufacturer to receive the highest grade within the carbon certification, paving the way for projects using its modules to receive priority for subsidies.

It followed the publication from NREC, also last week, of its initial carbon emission verification status list, detailing which manufacturers had received three-year certifications and for which products.

The scheme follows moves from other international markets, most notably France, with modules scored based on their carbon emission volume per kilowatt. But, unlike France, where various module manufacturers have verified low carbon footprints, South Korea’s framework also attaches so-called ‘levels’ for manufacturers, with the highest scores reserved for manufacturers based in Korea using Korean wafers.

In an update issued last month, Chinese suppliers were notified that they would be placed in Level 3, associating them with modules produced using more than 830g CO2/kW.

Speaking to PV Tech, Chinese manufacturers said they felt aggrieved that the mechanism failed to take into account individual circumstances and did not provide product-specific assessments or scores.

Some manufacturers pointed specifically to the penetration of renewable electricity in some Chinese regions, which would contribute towards the carbon emission volume of products manufactured there. Yunnan province, by way of example, derives more than 80% of its power from renewable sources due to its high density of hydropower generating stations in the area.

Manufacturers also noted that a series of modules from Chinese companies, assessed and valuated during France’s own testing regime, had recorded carbon emission volumes of between 498 and 541g CO2/kW.