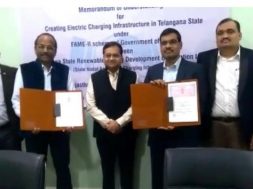 Hyderabad: Telangana State Renewable Energy Development Corporation Limited (TSREDCO) and the public sector Rajasthan Electronics & Instruments Limited (REIL) have entered into an agreement to promote e-mobility. A memorandum of understanding was signed here on Saturday for creating Electric Vehicle (EV) Charging Infrastructure in the State under the FAME Scheme of Ministry of Heavy Industries and Public Enterprises, Government of India.

The MOU was signed in the presence of Managing Director REIL Dr. AK Jain by General Manger, REIL RK Gupta, and General Manager of TSREDCO, GSV Prasad. While REIL has been working with the Department of Heavy Industry, to set up EV Charging Infrastructure across the Country to promote eMobility and has already installed 200 EV Charging Stations in first Phase.

TSREDCO has been appointed as State Nodal Agency by Telangana government for implementation of EV charging stations in the State with the objective of facilitating charging of e-vehicles. AK Jain stated that the time is ripe for electric mobility and to make it a success. REIL is working very actively and efficiently in this project in an effort to develop charging infrastructure under the Fame Scheme, he said.

“The union government is supporting EVs by providing subsidy since the cost of running Petrol and Diesel Vehicle is more than that of Electric Vehicles, which not only reduces the pollution but saves significant foreign currency also in importing petrol and diesel, which would further strengthen economic condition the Country,” Jain said.

He reiterated that, DHI has approved additional 270 electric vehicle charging stations (AC Smart, DC Fast and DC-FAST-122KW), in Ranchi, Bangalore, Goa, Shimla, Hyderabad, Agra and 4 highways (Delhi-Jaipur, Jaipur-Agra, Agra-Delhi and Mumbai-Pune) out of which the installation on Delhi-Jaipur-Agra-Delhi shall be Solar Grid Hybrid to ensure grid stability. The installation is in advanced stages, he added.

Jain stated that REIL has planned to manufacture electrical vehicle chargers in technical collaboration with reputed manufacturers under the Make in India initiative.. The process for identification of the manufacturer has already been started by the Company and there are plans to connect EV charging infrastructure with oil CPSEs and utility companies through its 8 regional offices.

REIL has so far undertaken a pilot project for deployment of 200 EV Chargers (150 AC and 50 DC) in three cities such as Delhi, Jaipur and Chandigarh. So far, REIL has set up charging stations on the Jaipur-Delhi and Delhi Chandigarh highways for the convenience of EV owners and taxi operators for inter-city transport. All the charging stations established are in public places in Government parking areas like Municipal Corporation, Metro and Railway parking etc.

On the other hand the TSREDCO is actively working in Telangana towards implementation of Electric vehicle charging infrastructure for Electric mobility. TSRDCO is proposing to add 138 charging stations under FAME- II in the next one year. TSREDCO also working on the possibilities of introducing Electric vehicles by migrating from Internal Combustion to EV vehicles with the state government organizations initially. TSREDCO has expressed that this MoU brings lot of synergy between two organizations in the implementation of EV charging infrastructure for the benefit of the State.