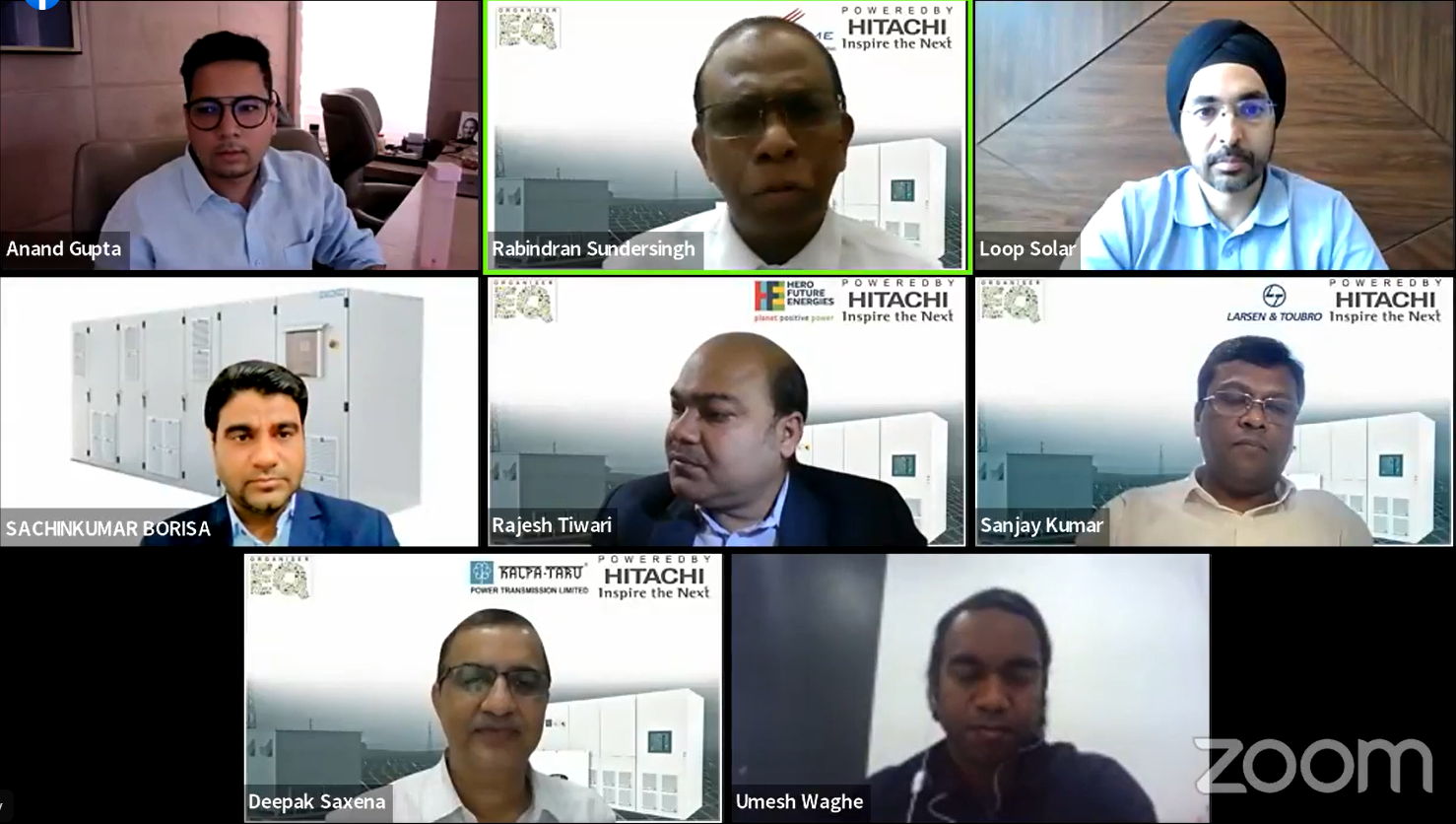 The webinar was held by EQ Magazine Pro on 20th April 2022. In this webinar optimization and costing of inverter design were discussed. It was moderated by Mr Ravindran Sundersingh, Chief Technical Officer, Renewablez, ACME Group.

Mr Sachin Kumar Borisa, General Manager, Hitachi Hirel described the role of inverters in the solar scenario. He said, “The inverter’s role in the solar power plant is very crucial as it is the only bridge to convert the power from DC to AC. I would say it is the heart of the project. And the technology which was bought in India by the 1990s, there were many innovations and upgradation in inverters, from central to string and microgrid. There are different kinds of topologies that have been innovated and upgraded periodically. This is the only component in the overall solar power plant which has the main job of the power conversions.”

Further he added, “There is a very thin line between cost and optimising of the design. Throughout the 80s, 90s and late 90s, we have seen the inverter topology and technology getting enhanced. The overall system is enhanced and new parameters and technology have come. Talking about the compromise from a design point of view by reducing the cost, we need to be very keen. There are few criteria to select the components while we’re committing for the warranty and 25 years life availability. So, there are two things we need to understand. From last 10 to 15 years, there have been multiple technology changes and voltage insulation level also got changed considering the cost optimizations, it is not only the inverter cost optimization but also the overall system cost optimization which got reduced from ₹17 per Watt to ₹2.3 per Watt. At a certain level considering the life span, their failure rates, their quality and the processes can be improved and reduced the cost by doubling the quantity or the bulk procurement of the raw materials.”

Mr Sanjay Kumar, Head, Global Strategic Sourcing and SCM, Renewables BU, Larsen & Toubro put his thoughts in front of the panellists. He said, “Quality is related to reliability and performance and also, there are elements of safety and protection. Safety with respect to personal as well as with equipment and the entire system. And when it comes down to optimization, it is not only cutting costs right is cutting costs. Now, speaking about the cost break up, around 30% of the cost is IGBT which is a black box, the DC section which is around around 13% approximately, the AC section on 20%, the cooling system is 6%, the others around 11 to 12% and then other accessories which is the remaining 5%. So, this is a major break up on the cost.”

Mr Arup Hazra, Head, Business Development C&I, SolarSquare Energy commented about the sourcing of raw materials. He said, “India has a huge dependency on China in terms of the material sourcing. The Indian inverters we know are being white labelled inverters which have OEM from China. So, in terms of indigenous manufacturing, India does lag behind the manufacturing capabilities. India is gaining edge from the manufacturing perspective as a result of Make In India, but still there’s a huge gap due to the ongoing semiconductor shortage and the sourcing which is dominated by China.”

Mr Deepak Saxena, Business Unit Head, International Renewable Energy, Kalpataru Power talked about the quality process for an inverter Anne and new testing requirements are necessary. He said, “If we see the database study which many organisations have done, solar panels are the 60% of the cost but they are responsible only for the 45% of the losses in a solar plant. When it comes to the inverter which is only 10% of the cost, it accounts for 40 to 45% losses in the generation. And, as we are all operating in a commercial organisation and cannot ignore the costing part. It does make an impact on the capex model of a plant because ultimately a solar plant is a front loaded capex model. The quality process does make an impact and it is not the quality process in the manufacturing line but it is the quality process in the inverter selection criteria. In an inverter, everybody is talking about the losses, the higher the voltage, more will be losses. When we talk about loading, loading is not a function of an inverter, it is a system function and it depends upon the system designers how to load it. The efficiency of an inverter is not only a function of simple efficiency, it is also driven by the system design.

When a designer is designing a system of an inverter, he needs to consider all the aspects. In an integrated system it is not only the inverter which makes the effect, it is the complete system. And when we see the testing process, today with the new grid regulations which have come into effect in India, it is not only the inverter response or how the inverter works with PPC but also the primary response of the inverter is important. As far as the other testing processes are concerned, we have seen huge amounts of individual equipment losses. Installation is also very important, most of their failure sentences are because we are not able to control the temperature of certain parts of the inverter and the cross effect of the temperature rises, then we start losing components because of the temperature rise. So, how the inverter is installed, how the air flows in the inverter affects the ambient temperature inside the inverter that needs to be studied carefully. All these things together make an inverter system a successful installation.”

Mr Rajesh Tiwari, Lead, Central Design and Engineering, Hero Future Energies was asked about the IPP’s expectations in terms of reliability. He said, “Firstly, we check if the system which we are taking is already placed or not, to ensure if there is a possibility to have a pilot project or else the third party who is going to validate and witness the factory inspection. If the guarantee of the inverter is of 5 years then the parts should be available after the guarantee period. It should not be limited because the voltage is 1000 to 1500 volts and can go upto 2000 volts. So, reliability is basically the service ability in the meantime. If the product is available, then the service should be available. In some of the central inverters, they have proactive guidelines or software which tells about the operational time of the equipment.”