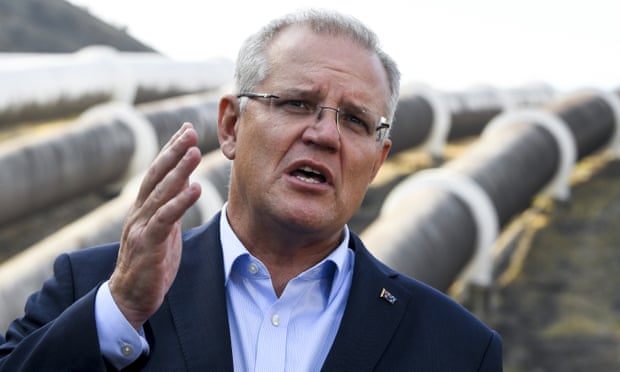 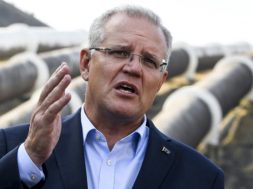 The Morrison government will flag a willingness to use its controversial taxpayer underwriting program for new power generation projects to boost Tasmania’s “battery of the nation” proposal.

The prime minister will, as part of this week’s attempted climate policy pivot, travel to Tasmania on Wednesday to underscore commonwealth support for the project, after promising $56m earlier this week for a second interconnector to deliver Tasmania’s renewable energy to the mainland.

Morrison will on Wednesday commit the commonwealth to developing an underwriting mechanism for the “battery of the nation” project, declaring the proposal will “help cut power prices and put an end to the sorts of recent blackouts that families and businesses have had to suffer through”.

But a feasibility study for the Tasmanian interconnector proposal now being supported by the government makes it clear the benefits are greater “when approximately 7,000MW of the national electricity market’s present coal-fired generation capacity retires”.

That study says: “The largest single influencing factor in the economic feasibility and timing of Marinus Link is the trajectory of coal-fired generation retirement in the national electricity market.”

While the success of the Tasmanian interconnector is predicated on coal retirements, the government has signalled on many occasions it could help bring new coal plants into the market – ironically using the the same underwriting program that it has now flagged using with the massive, on-demand, renewable energy program in Tasmania.

The energy minister, Angus Taylor, has also left open indemnifying new plants from the risk of a future carbon price.

The coal baron Trevor St Baker has put in an expression of interest to the government’s underwriting program, proposing two new coal plants at a cost of $6bn.

Alinta has also submitted a proposal for a gas-fired power plant at Reeves Plains in South Australia, a pumped hydro project in New South Wales and a “marginal improvement” to its Loy Yang B coal power plant in Victoria.

The government pulled its much vaunted “big stick” legislation during the last sitting fortnight because it did not want to accept an amendment from Labor and the Greens that would have stopped the commonwealth providing taxpayer support for coal.

As well as accelerating commonwealth involvement in the Tasmanian project to try to burnish the Coalition’s climate credentials for voters concerned about the government’s record, Morrison on Tuesday also confirmed the much mooted Snowy 2.0 expansion would proceed with a capital injection from the commonwealth of $1.38bn.

Labor has asked to see the business case for the Snowy expansion before it gives it bipartisan support, and there are also questions about expensive upgrades to transmission infrastructure that will be required to make the project fully operational.

Paul Broad, the chief executive of Snowy Hydro, told Guardian Australia in an interview it was not up to him to supply the full business case to Labor. “It’s up to the government to give things to the opposition, it is not up to me,” he said.

Broad said the company had put as much material as it could into the public domain about the proposal “without giving away our commercial advantage”.

Snowy Hydro’s materials confirms the costs associated with upgrading the shared transmission network, previously estimated by them at between $1bn and $2bn, have not been included in the 2.0 project costs. The company says it will fund “shallow connection” works to connect its generation to the shared network, but not the major upgrades.

Snowy has now called for two major transmission line upgrades to be brought forward, and Broad admits if the required upgrades don’t happen, Snowy 2.0 will not be fully operational.

Broad says the upgrades are needed for a broader purpose than simply making the 2.0 expansion operational. “Transmission is needed today,” he says.

“We had blackouts in Melbourne the other day and we had 1,500 or 1,600MW sitting in New South Wales that we couldn’t get into Victoria because we are constrained today in transmission. Isn’t that stupid? Our networks need upgrading.

“With Liddell closing, we have a significant amount of energy from Snowy today that we could get into the Sydney basin but we are constrained by transmission today. We argue transmission has got to be resolved for lots of reasons by lots of players – not only Snowy.”

He said he was confident the 2.0 expansion could compete with any new coal plant underwritten by taxpayers, but said he wasn’t in the business of predicting what the government might do.

‘Double the energy density’: US gigafactory to make lithium-metal batteries to beat Li-ion