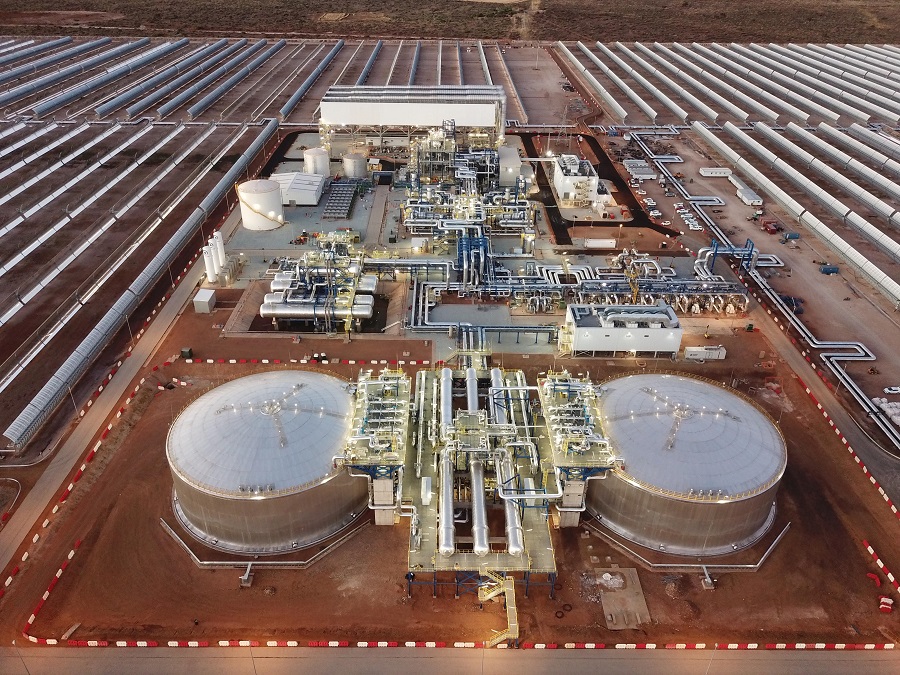 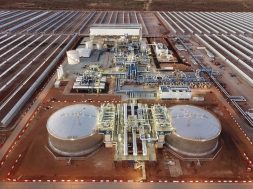 Kathu Solar Park, Norther Cape Region, South Africa: The Kathu Solar Park constructed as an EPC project by the engineering and technology group SENER and ACCIONA, was officially inaugurated in the Northern Cape Region, in South Africa. The opening ceremony was hosted by the Northern Cape’s Premier, Sylvia Lucas. From SENER, they were present the Group’s CEO, Jorge Unda, the Country Manager of SENER in South Africa, Siyabonga Mbanjwa, among other representatives, and, from ACCIONA, the Managing Director of ACCIONA Industrial, Ramón Jiménez, among others.

Thanks to this dispatchable supply, the plant will prevent the emission of six million tonnes of CO2 into the atmosphere over the next 20 years. 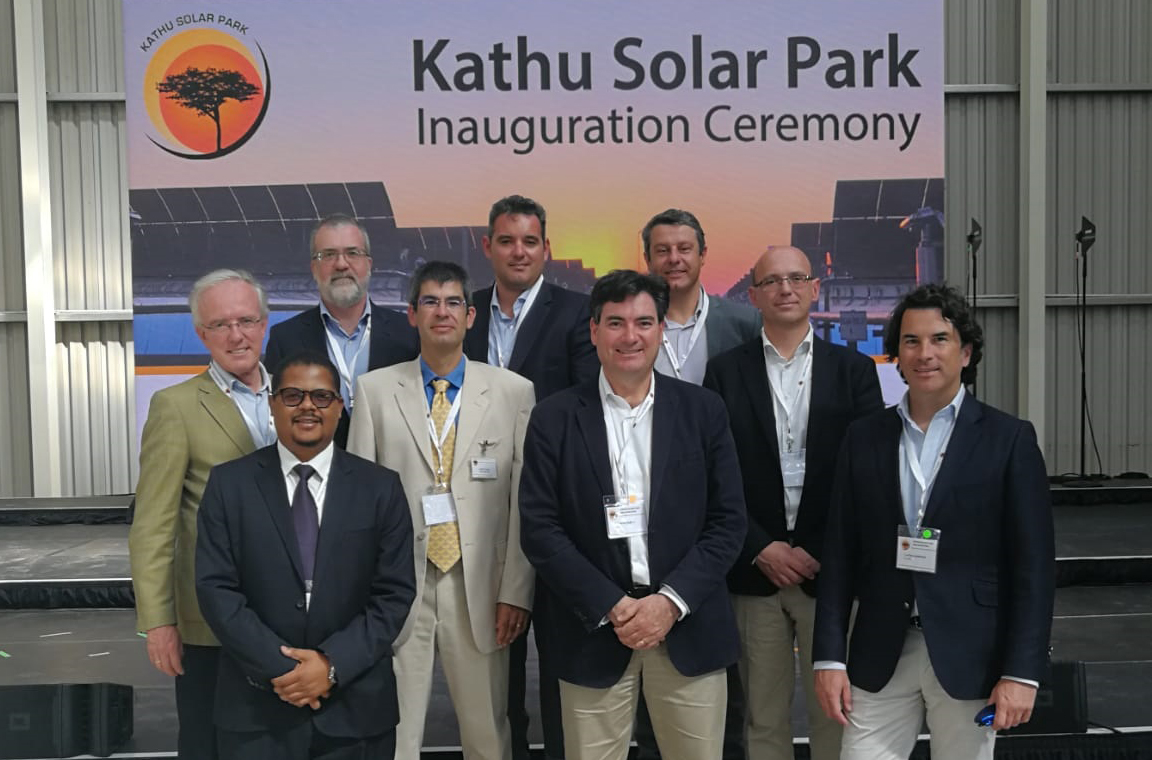 SENER CEO, Jorge Unda, declared during the inauguration: “We are proud to have contributed to make this clean energy project a reality in South Africa. From SENER, we have contributed with our knowledge in engineering, construction and commissioning, from the experience of our engineers in about thirty solar power plants developed in different parts of the world and, thus, with the best of our technology. Our leadership position in solar thermal power installations, with world-renowned pioneer projects, is a guarantee for the efficiency and profitability of Kathu Solar Park. We have left our mark not only in this project, but also in the local community, through social projects that have benefited nearly 17,000 people.”

Ramón Jiménez, Managing Director of ACCIONA Industrial, said, “The Kathu Solar Park project is another example of ACCIONA’s commitment to renewable energy. Construction of this plant has had and will have a major impact on the economy and residents of the Northern Cape region in South Africa. Kathu Solar Park provides the local community with a safe and manageable power supply, helping to offset the effects of climate change. Its construction has been a complete success thanks to the team that worked on the project, as well as the excellent relationship with the local administration, the business sector and with our client Kathu Solar Park.”

Kathu Solar Park was one of the projects awarded – on December 15th, 2014 – during bid window 3.5 of the Renewable Energy Independent Power Producer Procurement Programme (REIPPPP) by the South African Department of Energy (DoE). The joint venture between SENER and ACCIONA –led by this last company- was appointed by the consortium Kathu Solar Park (led by ENGIE and including a group of South African investors comprising SIOC Community Development Trust, Investec Bank, Lereko Metier Sustainable Capital Fund, its co-investors FMO, the Dutch development bank and DEG, the German investment and development company and the Public Investment Corporation) to provide the engineering, procurement and construction services for the project.

Thanks to the contribution of the EPC consortium formed by SENER and ACCIONA, Kathu Solar Park has a cutting-edge technology that allows the plant to operate with high efficiency and performance to deliver energy to the South African grid, particularly during the evening peak.

To achieve this, Kathu Solar Park uses parabolic trough technology equipped with a molten salt storage system that allows for 4.5 hours of thermal energy storage to provide reliable electricity in the absence of solar radiation, after sunset and with cloudy weather. Besides, the parabolic trough technology is a patented optimised collector technology by SENER, the SENERtrough®-2 system, which collectors are designed to optimise the power storage capacity and keep costs to a minimum. The technique involves using 384,000 large mirrors at Kathu Solar Park to reflect sunlight and collect solar heat to generate electricity.

The construction of this facility has also dedicated a global investment in social initiatives which have borne fruit over the past three years in the communities surrounding Kathu. Therefore, the EPC consortium formed by SENER and ACCIONA has carried out, through an independent organisation, the Kelebogile Trust – established and fully funded by the EPC consortium with 1.25 M€ – several social initiatives supporting near 17,000 beneficiaries.

Some 75 % of the budget available for these activities was used to improve education levels in the community, while the remaining 25 % was allocated to boost small and medium-sized businesses in the region, and to improve training for their employees to create new business opportunities and encourage local hiring.

The results of these initiatives include the creation of more than 5,000 direct, indirect and induced jobs during the construction phase of Kathu. Specialist training was also given to local personnel to operate the plant to ensure the transfer of knowledge and training for new professional profiles.

In addition to this, Kathu Solar Park has set up a Social Economic Development (SED) programme, investing 530,000 € on 27 initiatives during the construction phase; and will allocate 1 % of the revenue during the operation phase for education, health care, social welfare projects in the John Taolo Gaetsewe district, with the aim to further foster more local and rural progress. Joint experience in South Africa

For SENER and ACCIONA, this is the second solar thermal power project jointly developed by the two companies in South Africa. The first was the 50 MW Bokpoort plant (Upington), officially opened in late 2016, for which they were also part of the construction consortium. This plant was awarded ‘Large Scale Renewable Energy Project’ in the African Utility Week Industry 2017 Awards.

SENER leads the global solar thermal-electric power market, both in terms of the number of projects in its portfolio and its own technological solutions. SENER has participated in 29 plants in total, most of them turnkey projects, in Spain, the United States, South Africa (Bokpoort, Kathu and Ilanga-1 solar thermal power plants) and Morocco (Noor I and Noor II parabolic trough solar thermal power plants and Noor III central tower power plant), representing over 2,000 MW of installed capacity and a saving in excess of one million tonnes per year of CO2.

SENER is a private engineering and technology business group founded in 1956. Its aim is to offer its clients the most advanced technological solutions and to achieve international recognition based on its independence and commitment to innovation and quality. SENER has more than 2,500 professionals across its centres in Algeria, Argentina, Brazil, South Korea, Canada, Colombia, Chile, China, the United Arab Emirates, Spain, the United States, Morocco, Mexico, Poland, Portugal, the United Kingdom and South Africa. The group’s operating revenue exceeded 766 million Euros (2017 data).

ACCIONA is a leading group for sustainable infrastructure solutions and renewable energy projects around the world. It spans the entire value chain from design and construction through to operation and maintenance. With a presence in more than 40 countries and sales of €7.254 billion in 2017, the company is committed to contributing to the economic and social development of the communities in which it operates. ACCIONA seeks to lead the transition towards a low carbon economy, delivering quality and using innovative processes to optimise resource use and protect the environment in all of its projects.