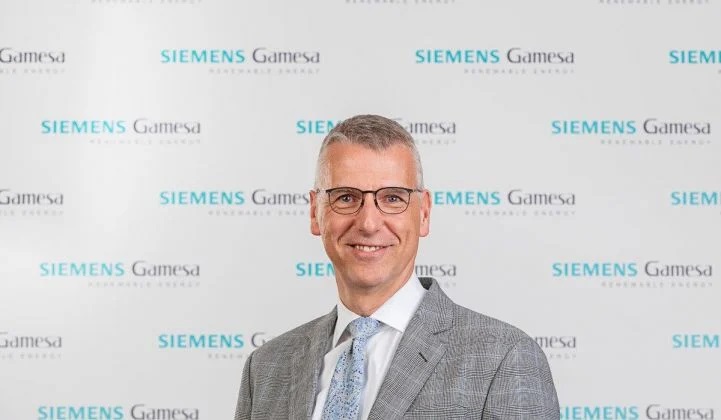 Andreas Nauen (pictured) will replace CEO Markus Tacke just months before the wind turbine maker is to be folded into a new spinoff, Siemens Energy.

Siemens Gamesa — formed several years ago by the merger of rival turbine makers Siemens Wind and Gamesa — was the world’s fourth-largest supplier of wind turbines last year and remains the dominant supplier of offshore turbines outside China. Tacke was named CEO shortly after the merger was finalized.

Andreas Nauen, currently head of the offshore division, was promoted to CEO effective immediately. Meanwhile, Siemens Gamesa is also recruiting for a new permanent CFO after David Mesonero left in March. A replacement for Nauen as head of offshore will be appointed in “due course,” the company said.

“Andreas Nauen has successfully demonstrated his ability to handle complex projects in the past. He has extensive experience with listed companies in the renewables sector,” said Miguel Angel López, chairman of the board of directors at Siemens Gamesa. “We expect the new CEO to now stabilize the onshore area quickly.”

Nauen was previously CEO of Siemens Wind Power and also previously served as CEO of German wind turbine maker Senvion at one time.

In announcing Tacke’s departure, Siemens Gamesa confirmed it expects to post negative earnings before interest and taxes (EBIT) for the third quarter of its fiscal year and for the whole of 2020. It swallowed losses in Q1 after being hit by project delays in Norway, and Q2 was impacted by higher costs due to the effects of COVID-19. The third quarter will be hit by additional project costs, the company said.

“Struggling for a few quarters now”

Shashi Barla, Wood Mackenzie’s principal analyst for the global wind supply chain, was not surprised by the news of the change in management.

“They have been struggling on the onshore front for a few quarters now,” Barla said in an interview. “I think they will be having delays with a few projects in Australia, with their [engineering, procurement and construction] contracts. Those projects are delayed because of grid connections, which is not [Siemens Gamesa’s] problem. But, in the end, it is their responsibility.”

Barla said further delays in Latin America are also possible, with those delays linked to the impact of the coronavirus pandemic.

While the impacts of the pandemic may have “amplified” the company’s problems, Barla does not believe they are solely responsible for the issues that have persisted.

Revenue and profit from Siemens Gamesa’s growing service business and its status as the global offshore wind turbine leader have helped to paper over problems in the onshore division. But with offshore wind’s procurement cycle in a relatively quiet year in 2020, that “saving grace” is diminished, Barla said.

And while its service contracts have continued to grow — in part due to the acquisition of some Senvion assets — Siemens Gamesa remains around 28 gigawatts behind Vestas in the market, Barla said.

Siemens Gamesa’s share price slumped in late 2017 after hitting a high of €22 and has never fully recovered. Shares fell 7 percent on Thursday, to around €14, after the news broke.

Ongoing management changes at majority shareholder Siemens may have also factored into the leadership decision. Later this year, Siemens plans to spin off a new company, Siemens Energy, which will include Siemens Gamesa alongside some other power and grid assets. The first CEO- and CFO-designates of Siemens Energy were both replaced just six months into the job.