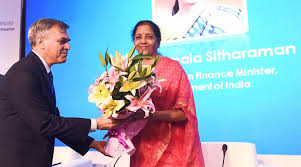 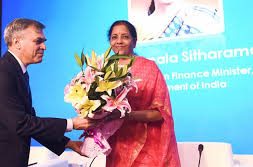 While stressing on the need to exploit solar energy in the high altitude deserts of Ladakh, Finance Minister Nirmala Sitharaman said: “I have requested Chairman of NABARD to visit Jammu and Kashmir so that NABARD can support the farmers there.”

Union Finance Minister Nirmala Sitharaman Tuesday directed the National Bank for Agriculture and Rural Development (NABARD) to extend support to the farmers of the newly-formed union territories of Jammu and Kashmir and Ladakh. Speaking at the 6th World Congress on Rural and Agriculture Finance in the national capital, Sitharaman stressed on the need to exploit solar energy in the high altitude deserts of Ladakh. “I have requested Chairman of NABARD to visit Jammu and Kashmir so that NABARD can support the farmers there,” she said.

The finance minister appealed to farmers for their help in contribution to solar energy generation, installing solar panels in farms and become an ‘urjadaata‘ (energy provider) from ‘annadaata‘ (grain provider).

Emphasising that rural development and farmers’ concerns are Centre’s top priority, Sitharaman directed NABARD to take up immediate, necessary steps to extend support to farmers in the two union territories and ensure that the next crop of saffron, peach, walnut and, other agriculture produce is procured without delay.

Sitharaman’s remarks on rural development came five days after the government released the National Crime Records Bureau’s farmer suicides in 2016. The data showed that though the number of farmer suicides has come down, the suicide rates for farm labourers has increased.

According to the data, Maharashtra, which continues to reel under agricultural losses, accounted for almost 40 per cent of all farmer suicides in the country in 2016. Karnataka was second on the list but still recorded 50 per cent less cases of farmers’ suicides than Maharashtra.