Solar Bill of Rights back in committee, Maine could require storage 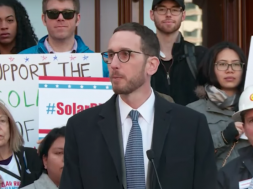 Solar Bill of Rights back in committee, Maine could require storage

Bankruptcy court ruling could let PG&E slip its solar contracts – A bankruptcy court judge last week ruled that his court, not the Federal Energy Regulatory Commission (FERC) has jurisdiction over the contracts signed by bankrupt utility Pacific Gas & Electric Company. Our take: While keeping FERC and the Federal Power Act out of the bankruptcy process has been seen as a way to let PG&E out of expensive legacy renewable energy contracts, this fight is a long way from over. Source: Greentech Media

Maine could require energy storage targets – A bill (LD 1614) has passed both houses of the Maine legislature will require a study of the potential benefits of energy storage for the state. If found beneficial, the state will be required to set targets for energy storage deployment.

Among the Clean Energy Plan’s highlights:

13 MW solar plant in Delaware – NASA Wallops Flight Facility is officially getting a solar system, as ground was broken on a 13 MW system that will accommodate up to 80% of the center’s electricity usage. The project is being developed by Ameresco, and is anticipated to save the facility $537,000 in its first year alone. The project will consist of both ground-mounted arrays and solar carports. Source: DelMarVA Now

Duke’s new solar program – Duke Energy’s customer pilot program for Indiana has been approved by state regulators, paving the way for businesses, schools and nonprofits to  lease a solar energy setup from Duke Energy for a period of up to 20 years. Under the lease, Duke would install, operate, maintain and own the facility, while the customers receive all of the kilowatt-hour output of the solar energy equipment through net-metering Source: Duke Energy

Vistra new retail solar offering – Vistra Energy today announced its latest retail electricity product, TXU Energy Pure Solar, which provides residential customers easy access to solar power. All of the energy purchased comes from solar farms, including the company’s Luminant Upton 2 Solar Power Plant, Texas’ largest solar facility… This value-add allows customers to continue to choose the plan that’s right for them, based on the way they use electricity, but now they can also choose solar energy. Customers can add TXU Energy Pure Solar to any plan for a nominal fee and ensure that solar energy is being produced and delivered to the ERCOT grid in amounts equal to their energy usage. Source: Vistra Energy

Massachusetts extends deadline for policy comments – The deadline to submit comments in regards to the RPS Class I and RPS Class II regulations have been extended to 5 PM on July 26, 2019 by the Department of Energy Resources in Massachusetts. Written comments can be submitted to John Wassam electronically to DOER.RPS@mass.gov or via mail to the Department of Energy Resources, 100 Cambridge Street, Suite 1020, Boston, MA 02114. Source: DOER

BNEF: Wind, solar equal in corporate PPAs so far this year – After years of wind dominating corporate procurement, wind and solar deals signed to date in 2019 are about equal, at 2.8 GW each, for a total of 5.7 GW of corporate renewable energy deals signed. Source: Bloomberg NEF