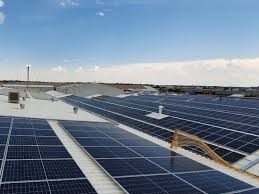 Seven out of 13 Coca-Cola Beverages South Africa’s (CCBSA) manufacturing facilities in the country now use solar power. The company’s target is to install solar power at 12 of these plants by the end of the year.

CCBSA initiated a renewable energy project in 2018 as part of the company’s sustainability commitment and strategic objectives. The company started rolling out solar photovoltaic panels at its plants across the Free State, Eastern Cape, Gauteng and KZN as well as at its Elgin plant in the Western Cape. The aim is to generate up to 18,313MWh ever year, which would be 11% of the company’s total electricity demand based on 2019 usage.

CCBSA manufacturing and technical director Henry Peek said the lockdown caused by the COVID-19 pandemic delayed their plans and only 1,860MWh of solar energy was generated by the end of August across all their local plants. “While this is behind our initial projections we are well on our way to reaching and surpassing our 2019 total generation of 2,905MWh, as we have an additional three plants generating solar power, up from four in 2019,” explained Peek.

The Premier plant in KwaZulu-Natal, Bloemfontein Tannery plant and Bloemfontein Gutsche plant commissioned their solar systems this year, adding to Devland, Heidelberg, Pretoria and Midrand plants which also make use of solar power. Next, engineering teams will add plants in Phoenix, Lakeside, Wadeville, Polokwane and Elgin to the mix.

Peek: “In order to make better use of this additional capacity the next phase of our project will be to engage with municipalities to explore power export agreements so that this much-needed energy can go back into the national grid for our communities to benefit from green energy.”

On a global level Coca-Cola aims to reduce its carbon footprint by 25% compared to its 2010 levels. A big part of its sustainability efforts is centred on its packaging. In South Africa, the company worked with the PET plastic bottle industry to become one of the founding members of the PET Recycling Company (PETCO). PETCO has since launched in Kenya in 2018 and Ethiopia in 2019 with plans for Tanzania in the near future. The recycling model planned across East Africa will build on the successful multi-stakeholder approach pioneered in South Africa.

PET plastic is 100% recyclable when designed according to basic design principles. In Kenya, the rate of PET bottles collected for recycling rose from 5% to 35% in one year after PETCO Kenya was launched. In South Africa in 2018, 63% of PET bottles were recycled with an estimated 68,000 employment opportunities created across the country.