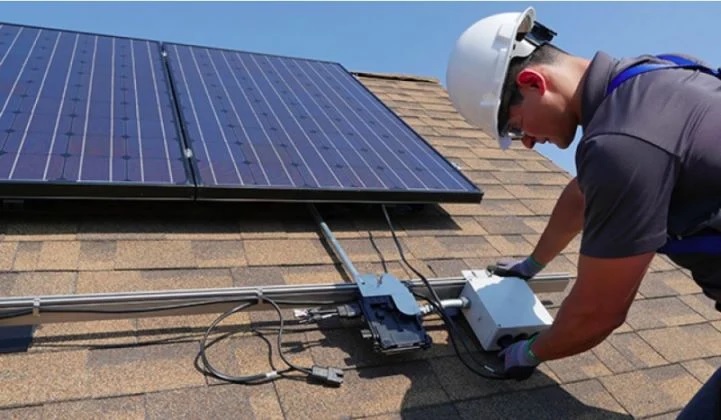 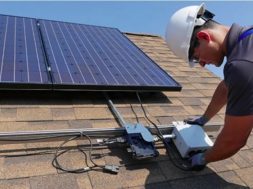 Orders are rising again in the U.S. solar market, but “the rate of that recovery is questionable,” says SolarEdge CEO Zvi Lando.

Residential solar inverter rivals SolarEdge and Enphase faced the same headwinds from the COVID-19 pandemic in the second quarter, with both companies reporting a downturn in Q2 revenue.

However, both companies also laid out plans for capturing a chunk of the fast-growing U.S. market for battery-linked solar systems and said the worst of the downturn may be over.

SolarEdge: Strong sales outside the U.S.

SolarEdge reported second-quarter GAAP net income of $36.7 million on revenue of $331.9 million. That’s slightly higher than $331.9 million in revenue for the same quarter last year, but a drop from $431.2 million in the first quarter of 2020 — a performance that “reflects…the impact of the global pandemic,” CEO Zvi Lando said on Monday’s earnings conference call.

These impacts differed from market to market. The company’s U.S. solar revenue of $124 million was level with the second quarter of 2019 but down significantly from the first quarter of 2020, which was “expected, considering that the United States has been heavily impacted by COVID-19,” Lando said. While inventory tracking indicates that residential sales have been improving since April, commercial and industrial business remained slow, he noted.

Cancellations and delays have slackened somewhat in recent months, while orders and installations rates from distributors for inverters and module-level power optimizers have been increasing, Lando said. “We are cautiously optimistic about the recovery of the U.S. market in the coming months,” but “the rate of that recovery is questionable,” leading to a third-quarter guidance of revenue between $325 million and $350 million.

European revenue of $144 million rose compared to $122 million in the previous quarter, largely due to a stronger economic recovery and continued renewable energy incentives in several key countries including Germany, the Netherlands, Italy, Switzerland, Poland and France.

Non-GAAP gross margin for its solar business shrank to 33.8 percent compared to 35 percent in the last quarter, largely driven by the share of business in Europe’s lower gross margin environment, where other European and Chinese inverter manufacturers offer more competition and SolarEdge has a higher portion of commercial revenue, CFO Ronan Faier said.

On the energy storage front, SolarEdge began to ship its HD Wave Energy Hub inverter, which is compatible with third-party batteries, to North America in May. That’s a key step to serving solar installers such as Sunrun, Sunnova, SunPower, Tesla and Vivint Solar (recently targeted for acquisition by Sunrun), all of which are seeing growing demand for battery-backed solar.

Battery maker LG Chem announced last month that it’s coupling its 9.8-kilowatt-hour Resu battery with the Energy Hub inverters in a DC configuration optimized for emergency backup power, and the system is being installed with “many other types of batteries in an AC-coupled configuration,” Lando said.

SolarEdge is planning to release its own residential battery later this year, with research and development progressing as planned, and product certification somewhat slowed due to COVID-19 disruptions, Lando said. SolarEdge reported revenue of $21.8 million from its non-solar businesses, mostly related to the sale of lithium-ion batteries from 2018 acquisition Kokam.

Microinverter maker Enphase reported second-quarter revenue of $125 million, down from $205.5 million in the previous quarter and $134.1 million in the same quarter last year, as solar installations saw a “dramatic slowdown” in April and only began to recover to normal ranges in June, CEO Badri Kothandaraman said on a Tuesday earnings conference call.

“COVID-19 created significant downward pressure on demand in the second quarter,” Kothandaraman said. But many of its top-tier residential solar installer partners have been able to shift from in-person to online sales to make up for the disruption in face-to-face contact caused by stay-at-home and work-stoppage orders, he added.

The Fremont, Calif.-based company marked a GAAP loss of $47.3 million for the quarter, driven by a non-cash charge of $59.7 million driven by accounting for convertible notes issued in March and marked to market in May, after the company’s stock price had nearly doubled. On a non-GAAP basis, second-quarter net income of $23.5 million was in line with $23.2 million in the second quarter of 2019, and down from $51.9 million in the first quarter of 2020.

Non-GAAP gross margin of 39.6 percent edged up from the previous quarter’s 39.5 percent, while revenue grew in European and Australian markets. Enphase has been fighting to build its U.S. residential solar inverter market share from SolarEdge, which held about 60 percent of the market as of the first nine months of 2019, compared to about 20 percent for Enphase, according to Wood Mackenzie’s U.S. PV Leaderboard.

On the energy storage front, Enphase started shipment of its Encharge energy storage systems for pilot installations in June, an important step toward Enphase’s goal of capturing the additional value of batteries alongside its microinverter sales.

“We are ramping the battery supply chain and have more demand than what we can support in Q3,” Kothandaraman said.

Enphase isn’t revealing its battery storage revenue, but it says it expects to see an 8 to 10 percent average “attach rate,” or percent of microinverter installations that will add batteries, by the fourth quarter. That’s a lower attach rate than reported by major solar installers in California and other markets with high demand for solar-storage, but Kothandaraman ascribed that to supply limitations rather than lack of customer interest.

“The feedback we’ve received on our Encharge systems is quite good,” he said, with installers lauding features such as smartphone-enabled off-grid switching and the ability to restart power-hungry air conditioners and pumps without overloading the battery. Enphase is adding a second manufacturer of lithium-ion phosphate batteries in the fourth quarter, and expects a third to be qualified next year, he said.

Enphase is also planning to release a version of its microinverters that can allow solar-only homes to remain energized during power outages by the fourth quarter of the year —a potentially valuable system for California residents facing wildfire-prevention blackouts and other customers seeking backup power without batteries.

Enphase projected third-quarter revenue in the $160 million to $175 million range, and it is 100 percent booked through the midpoint of the third quarter, Kothandaraman said.

To strengthen the distribution & transmission sector has resulted in a massive 25% leap in power consumption, resulting in electricity demand growing from 3,500 MU per day to 4,500 MU: RK Singh – EQ Mag Pro