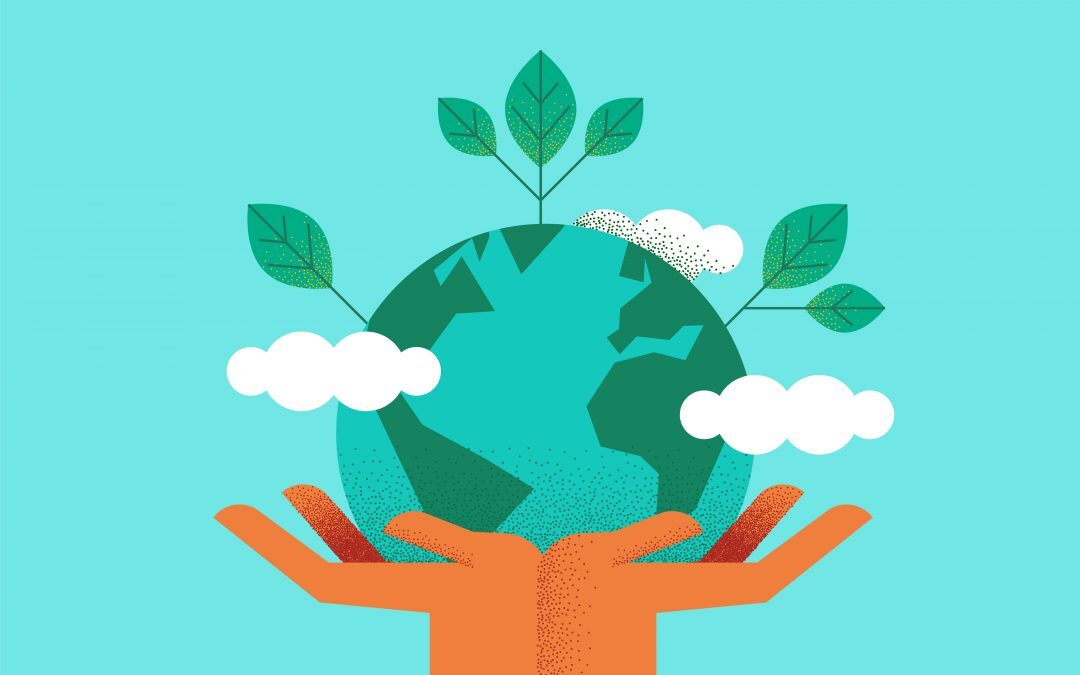 Research shows that the most impact on IT-generated emissions can be found in unexpected places.

Companies and governments looking to combat climate change are turning to tech for help. AI, new technologies, and some promising tech-driven business models have raised hopes for dramatic progress.

While many organizations’ climate goals are lofty, enterprise technology leaders—CIOs, chief digital innovation officers (CDIOs), and chief technology officers (CTOs), among others—have not always succeeded at turning climate ambitions into reality. One of the biggest reasons is that hard facts and clear paths of action are scarce. Misconceptions and misinformation have clouded the picture of what CIOs and tech leaders should do.

We have done extensive analysis of where technology can have the biggest impact on reducing emissions. To start, we divided technology’s role into two primary types of activities:

offense—the use of technology and analytics to cut emissions by reducing (improving operational efficiency), replacing (shifting emission-generating activities to cleaner alternatives), and offsetting (purchasing carbon credits to compensate for unabated emissions) defense—the actions IT can take to reduce emissions from the enterprise’s technology estate

The defense activities are where the CIO, as the head of IT, can act independently and quickly. This article focuses on defense, specifically the IT elements over which a CIO has direct control. We examined emissions from use of electricity for owned enterprise IT operations, such as the running of on-premises data centers and devices (classified as scope 2 by the Greenhouse Gas Protocol1 ), and indirect emissions from technology devices that the CIO buys and disposes of (scope 3).2 (See sidebar, “Scope of the McKinsey analysis.”)

What the facts say

Our analysis has uncovered several facts that contravene some commonly held views about enterprise technology emissions. These facts involve the significant amount of tech-related emissions, the share of emissions from end-user devices, the variety of mitigation options available, and the favorable impact of shifting to cloud computing.

Enterprise technology is responsible for emitting about 350 to 400 megatons of carbon dioxide equivalent gases (CO2e), accounting for about 1 percent of total global greenhouse gas (GHG) emissions. At first blush, this might not seem like a lot, but it equals about half of the emissions from aviation or shipping and is the equivalent of the total carbon emitted by the United Kingdom.

The industry sector that contributes the largest share of technology-related scope 2 and scope 3 GHG emissions is communications, media, and services (Exhibit 1). Enterprise technology’s contribution to total emissions is especially high for insurance (45 percent of total scope 2 emissions) and for banking and investment services (36 percent). 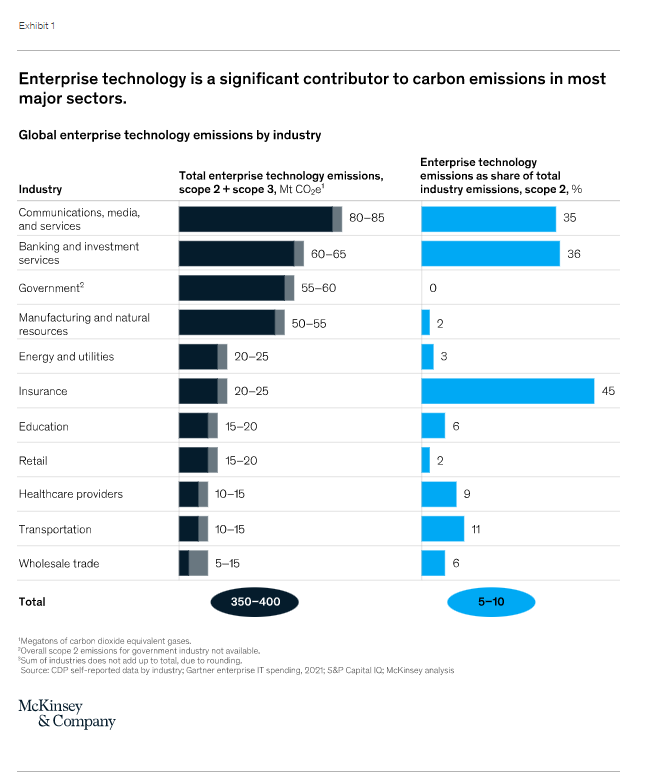 This amount of carbon dioxide and equivalent gases is a significant prize for companies under increasing pressure to cut emissions. Progress on climate change requires action on many fronts, and enterprise technology offers an important option that CIOs and companies can act on quickly.

End-user devices—laptops, tablets, smartphones, and printers—generate 1.5 to 2.0 times more carbon globally than data centers (Exhibit 2).3 One reason is that companies have significantly more end-user devices than servers in on-premises data centers. In addition, the devices typically are replaced much more often: smartphones have an average refresh cycle of two years, laptops four years, and printers five years. On average, servers are replaced every five years, though 19 percent of organizations wait longer.4 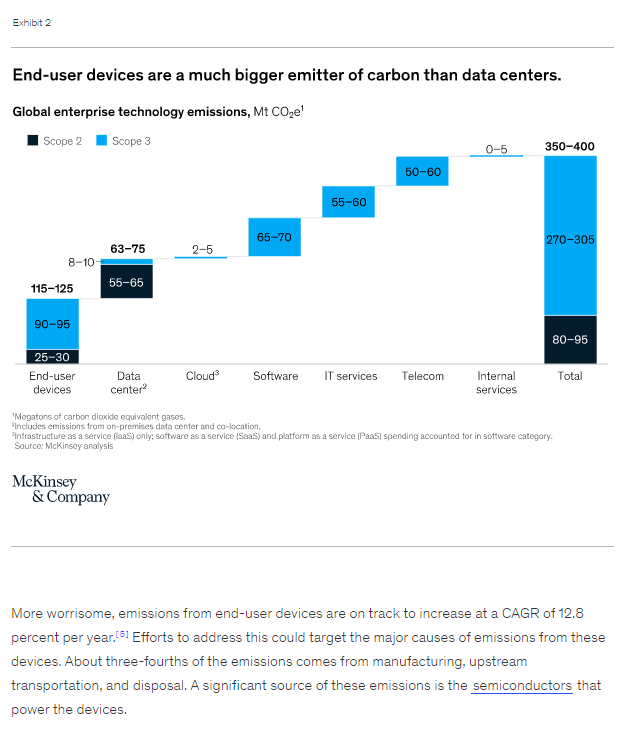 More worrisome, emissions from end-user devices are on track to increase at a CAGR of 12.8 percent per year.5 Efforts to address this could target the major causes of emissions from these devices. About three-fourths of the emissions comes from manufacturing, upstream transportation, and disposal. A significant source of these emissions is the semiconductors that power the devices.

We have found that when it comes to going green, many CIOs think in terms of investments needed to replace items or upgrade facilities. Our analysis, however, finds that CIOs can capture significant carbon benefits without making a significant investment—and in some cases can even save money (Exhibit 3). 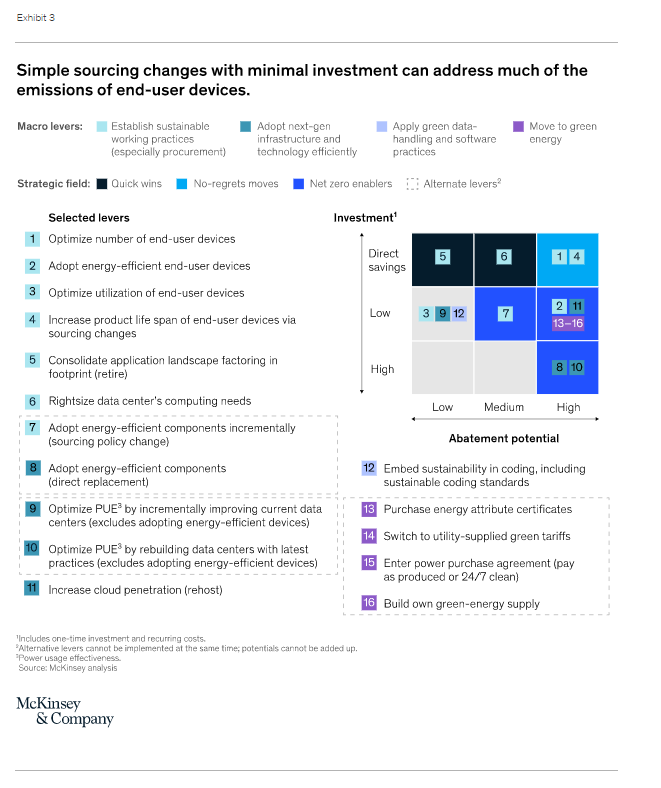 Overall, for example, 50 to 60 percent of emissions related to end-user devices can be addressed through sourcing changes, primarily by procuring fewer devices per person and extending the life cycle of each device through recycling. These options will not require any investment and will lower costs, though companies may want to evaluate the impact on employee experience.

In addition, companies can more aggressively recycle their devices; 89 percent of organizations recycle less than 10 percent of their hardware overall.6 CIOs can put pressure on suppliers to use greener devices, especially as companies in the semiconductor sector are already increasing their commitments to emission reduction. Further low-cost, high-impact actions include optimizing business travel and data center computing needs, as well as increasing the use of cloud to manage workloads.

Moving to cloud has more impact than optimizing data centers

Optimizing an on-premises data center’s power usage effectiveness (PUE)7 is expensive and results in limited carbon abatement. If a company were to double what it spends on infrastructure and cloud to reduce PUE, it would cut carbon emissions by only 15 to 20 percent. Structural improvements in data centers and optimized layout can help, but the impact is limited, and many companies have already implemented them. More aggressive measures, such as moving data centers to cooler locations or investing in new cooling tech, are prohibitively expensive.

A more effective approach is to migrate workloads to the cloud. Hyperscalers (also known as cloud service providers) and co-locators are investing significantly to become greener through measures such as buying green energy themselves and investing in ultra-efficient data centers with a PUE equal to or less than 1.10, compared with the average PUE of 1.57 for an on-premises data center.8 (We estimate that companies could achieve just a 1.3 PUE score for their data center if they invested nearly 250 percent more, on average, over what they currently spend for their data centers and cloud presence.)

With companies and governments under intensifying pressure to cut carbon emissions and with technology playing a key role in delivering on those goals, CIOs will find themselves on the front lines. The challenge will be to reduce IT’s carbon footprint while delivering high-quality, low-cost technology services to customers and employees.

On average, completion of the defensive steps might take three to four years. However, CIOs who act decisively and precisely can achieve 15 to 20 percent of carbon reduction potential in the first year with minimal investment.

CIOs can choose from among a wide array responses, particularly in conjunction with the CEO and the board. However, three measures they can take right now will prepare the organization for longer-term efforts. These measures involve sourcing strategies, key metrics, and a performance management system.

Far and away the fastest and most effective defensive measure for reducing IT carbon emissions is to revise policies for technology sourcing. Optimizing the number of devices in line with standards followed by companies in the top quartile9 would reduce about 30 percent of end-user-device emissions, the amount of carbon emitted by Hong Kong. For example, top-quartile companies have one printer for every 16 people in the workplace; the overall average is one printer per eight people.

This sourcing shift does not necessarily lead to a degradation in user experience, because the rollout of 5G and increasingly advanced processing and compute power allow the main processing function to happen at the server. Therefore, devices can be less powerful and consume much less energy. Essentially, this is a software-as-a-service (SaaS) model where high-end and user-friendly experiences happen on the server, not the device. The effectiveness of this approach will depend on having stable networks, less resource-intensive coding at the device level, edge computing capabilities, and shifts of offerings to more efficient platforms (for example, cloud).

As part of this effort, the CIO and the business’s head of procurement will need to collaborate on reviewing and adjusting device refresh timelines and device-to-person ratios, as well as adjusting the basis for purchasing decisions. Procurement generally relies on cost/benefit calculations, and rightly so. That approach will need to expand to account for carbon dioxide emissions. The spirit of collaboration should extend to suppliers as well, with the parties working together to formulate plans that provide the greatest benefits for all.

A more thoughtful sourcing strategy extends beyond end-user devices. CIOs, for example, should look for green sources of the electricity IT uses. When these sources are unavailable, CIOs can direct procurement to power purchase agreements to offset carbon use. CIOs can also set green standards for their vendors and suppliers, requiring GHG emissions disclosures and incorporating them into their criteria for purchase decisions.

Any real progress on green technology can happen only when companies measure their “green returns.” But today, most green metrics omit cost and savings, which ultimately makes them impractical. A better metric focuses on cost per ton of carbon saved (accounting for costs saved as well). Sophisticated models calculate emissions throughout the full life cycle, including production, transportation, and disposal.

CIOs can further assess suppliers, manufacturers, and service providers based on how advanced they are in recycling and refurbishing electronics; designing circular components; extending product life cycles with better design, higher-quality manufacturing, and more robust materials; offering repair services; and reselling to consumers.

Decisions about IT spending need to consider a range of factors, including technical debt abatement and business strategy. Along with these factors, companies should institutionalize a green ROI metric that is transparent to everybody in the business as an element in IT decision making, including in requests for proposals (RFPs). Doing so will enable companies to better understand the true impact their technology is having on carbon emissions.

Establishing a green ROI metric is only a start. CIOs need to establish a baseline of performance, measure progress against the baseline, and track impact in near real time, much as companies track real-time computer and network usage for applications in the cloud. This kind of measuring system ensures that CIOs know what’s working and what isn’t, so they can adjust quickly.

In practice, implementing green measurement can be challenging. Some companies have spent a year measuring their carbon footprint, ending up with an outdated analysis. This tends to happen when companies are determined to measure every bit of carbon emitted, a praiseworthy but time-consuming effort. CIOs can make substantial progress by instead prioritizing measurement where the impact is highest, such as tracking the number of end-user devices purchased and in use, the current duration of use for each device, and the ratio of devices per user. Another way CIOs can make quick progress is to embed emissions- and power-monitoring capabilities into large technology assets and work with external providers, such as electricity companies, to track usage in real time.