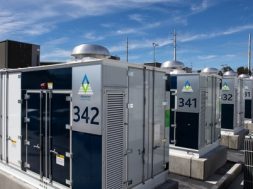 U.S. grid-connected energy storage capacity this year is set for a twofold increase to 712 MW from 376 MW last year. What’s more, between 2019 and 2024, storage capacity will soar to almost 5 GW, of which 90 percent will be battery storage, IHS Markit said in a new report.

This will make the United States the country with the most energy storage capacity connected to the grid, ahead of the current global leader in this area, South Korea.

According to the market research company, there are several factors that will drive this development, and these include the falling costs of battery storage components and the solar investment tax credit introduced in 2006.

As for the falling costs, they are part of a larger trend in the renewable energy industry as developers of wind and solar installations continue to boost their efficiency and costs of materials decline despite the U.S.-China trade war many expected to have a devastating effect on solar in particular.

In fact, in some cases, solar and wind plus storage is cost-competitive with traditional peaker plants that use fossil fuels to provide backup power when needed. This week the U.S. News & World Report wrote about Southern California Edison’s decision to scrap its plans for a new 262-MW peaker plant in favor of a 195-MW battery array that will store energy produced by solar and wind farms.

The solar investment tax credit, according to IHS analysts, will be the main driver behind a boom in utility-scale solar plus battery storage installations over the next four years. These, the research firm said, will come to account for 40 percent of all energy storage installations to be built in the United States between 2019 and 2023.

This year will be crucial for new deployments: the solar investment tax credit, which currently stands at 30 percent, will fall to 10 percent at the end of 2022. It’s worth noting that the investment tax credit will remain at 10 percent permanently, but only for utility-scale installations, which provides an additional impetus for new projects. This means solar-plus-storage developers have a major incentive to start building their facilities this year and they will take advantage of this incentive, according to the IHS analysts.

There is one additional factor in favor of more energy storage deployments, too: it can stabilize the performance of solar and wind power installations in extreme weather conditions that interfere with power generation, such as heavy snow or wind. While perhaps not as important as the other two that will motivate the major jump in deployments in the United States, it certainly will act as a supporting factor in this jump.

0
0   0
previous sonnen and Evolutionary Home Builders partner to Design the Most Sustainable Passive Home Community in the United States
next Energy storage in the Midwest and beyond: A timely analysis