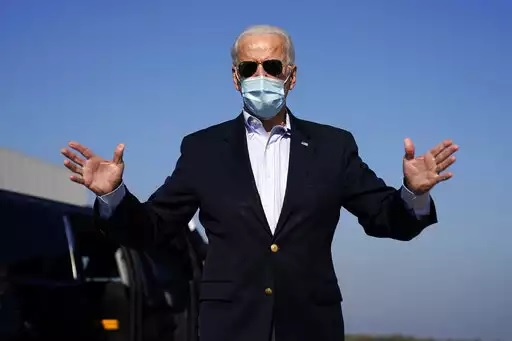 U.S. solar stocks rose on Friday after U.S. Democratic presidential candidate Joe Biden said in the final pre-election debate on Thursday night that if elected he plans to transition to a more climate-friendly economy.

Shares of Renesola Ltd, Jinkosolar Holding Co Ltd , Canadian Solar Inc and SunPower Corp were up between 2 per cent and 3 per cent in premarket trading.

Biden and President Donald Trump were asked at their matchup in Nashville, Tennessee, what they would do to combat climate change – the first time in a presidential debate they were not asked if they believed in it or not.

Biden said the country should eventually replace oil with solar, wind and other forms of non-polluting power.

“I would transition from the oil industry,” Biden said, adding his plan for a more climate-friendly economy would create high-paying jobs and boost U.S. businesses.

Shares of oil companies were broadly unchanged as U.S. crude ticked up 0.4 per cent to $40.79 with demand concerns raised by surging coronavirus cases in the United States and Europe being offset by the prospect of an extension to OPEC-led supply curbs.

After the debate, Biden told reporters, “We’re not getting rid of fossil fuels.”

“We’re getting of the subsidies for fossil fuels. But we’re not getting rid of fossil fuels for a long time…they’re not going to lose their jobs. Besides, a lot more jobs are going to be created in other alternatives.”

Trump, during the debate, cited a federal program to plant trees and a drop in carbon emissions to say he loves the environment, but added he was not willing to harm businesses.

He accused Biden of planning to ban hydraulic fracturing, a process of extracting oil and natural gas from shale that is opposed by many environmentalists. Biden, however, said he would ban fracking on federal land only.