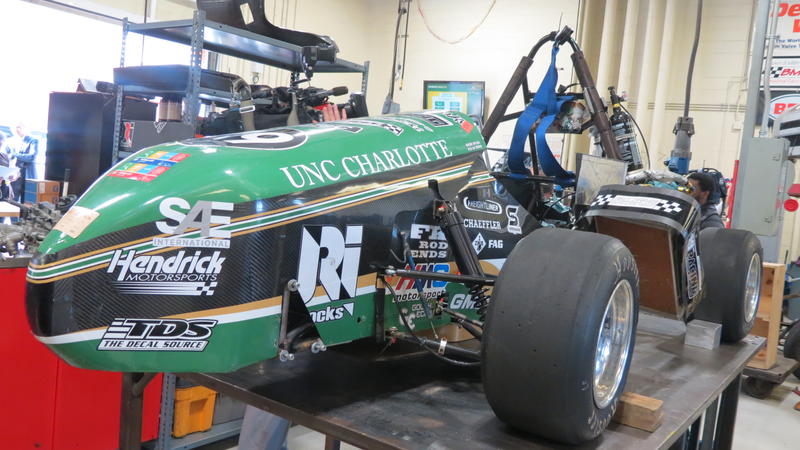 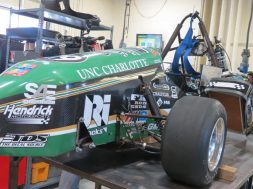 Researchers at UNC Charlotte’s Motor Sport and Automotive Research Center are known for their work in improving the performance of race cars. They are expanding that work to now include research on lithium-ion batteries, which are commonly used in smart phones and electric vehicles. The problem is they sometimes explode or catch fire.

At the center, engineers and students are working to make them safer in a large, high-ceiling building that bustles with activity daily. On this day, students worked on engine parts, tires were mounted for testing on a tall, elevated machine and a researcher measured a molding the size of a car hood.

Then there’s a quiet spot in a back corner where graduate students listened to mechanical engineering professor Jun Xu. He leads the center’s lithium-ion battery safety research. “Our research will give them guidelines on how to design safer batteries,” Xu said.

Lithium-ion batteries can be charged faster, they last longer, work better in extreme hot and cold weather and are lighter, all things consumers want for their smart phones and computers. Auto manufacturers like them for the same reasons. But Xu said there’s also a lot that battery manufacturers and the companies they produce them for do not know about these batteries.

“The major problem is they don’t understand the fundamental mechanism how the battery will behave under certain scenarios, like high pressure, high and low temperature, how will they behave and that’s why we do experiments and numeric simulations to deal with these problems,” Xu said.

Xu and his team of researchers use experiments and computer-generated simulations to determine how lithium ion batteries perform in various abnormal, circumstances such as extreme heat or cold and under what conditions do they fail.

“If you have a crash or a vehicle or if you somehow smash your cell phone, that’s one condition,” said Mesbah Uddin, the center’s director. “Or if you indent the battery or there’s a penetration of something in the battery cell. That is a mechanical stressing of the battery. What happens if you overcharge the vehicle?”

Sometimes fires happen. Certain components in lithium ion batteries are not supposed to make contact with each other or be exposed to air. When that happens, intense heat is often generated.

“When you produce more heat and the heat is not taken away the battery gets overheated to an extent that there is a possibility of it catching fire and that’s what you have seen with the cell phone batteries, the Toshiba laptop batteries and the skate blade batteries,” Uddin said.

And in electric vehicles such as Teslas and the Chevy Volt. Some have been deadly. Airlines have placed some restrictions on lithium batteries and they are banned on nonstop flights to the U.S. originating from 10 airports in the Middle East and North Africa due to terrorism concerns. Xu said the results of their computer simulations and experiments provide guidelines for battery manufacturers to use in designing safer batteries.

“The methodology that we are providing to Jaguar and Land Rover is pretty mature and they are already using it and you will see the latest product they will have for the electric vehicles are using our methodology,” Xu said.

Those electric vehicles and SUVs are expected to roll out later this year says Uddin. A Jaguar official said the vehicles’ lithium ion batteries are encased in crash-protected packs that minimize the risk of fires and damage to the battery in an accident.

According to Uddin, the center’s researchers suggested things like making the space for a battery’s cells wider to prevent overheating. They also indicated that stronger protective shields could be used to prevent fires and explosions.

Uddin said he expects the research to apply to the American racing industry in the future when those protective shields will be even more important because of the numerous crashes that occur.

“Racing is changing but right now the American racing industry is not as big on electric vehicles except for small competitions but in some races in Europe they are mostly electric and hybrid, so in 10 years from now, we have to prepare our engineers for 10 years and we’re trying to be proactive here,” Uddin said.

Uddin said the research they are doing at UNC Charlotte isn’t solely about making vehicles safer, but the goal is to apply it to all products that use lithium ion battery.