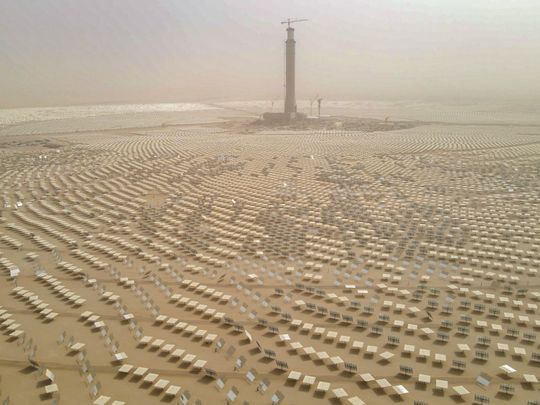 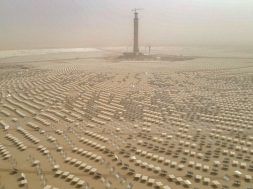 A view of the Mohammad Bin Rashid Al Maktoum Solar Park in Dubai.

Dubai: The fourth phase of the Mohammad Bin Rashid Al Maktoum Solar Park, which will provide clean energy to around 320,000 homes, is on track.

Al Tayer was accompanied by a number of executive vice-presidents and officials at Dewa during his visit.

Abdul Hamid Al Muhaidib, executive managing director of Noor Energy 1, briefed Al Tayer on the works in the project. Noor Energy 1 is owned by Dewa, ACWA Power from Saudi Arabia, and the Silk Road Fund, which is owned by the Chinese government. The visit discussed the construction workflow and continuity for this strategic project.

Progress in the solar tower is around 87 per cent, completing 10 million safe working hours without injuries. The concrete part of the solar power tower is now complete at a height of 222 metres.

The Molten Salt Receiver (MSR) was built and assembled on top of the world’s highest solar tower in a construction process in June 2020. The pallets and tubes that transfer the molten salt inside the solar tower have also been completed.

The MSR is the centre and the most important part of the CSP plant. It receives solar radiation and turns it into thermal energy. Up to 82.7 per cent of the overall project’s first phase has been completed. This includes the solar power tower, the parabolic basin complex, and the photovoltaic solar panels. 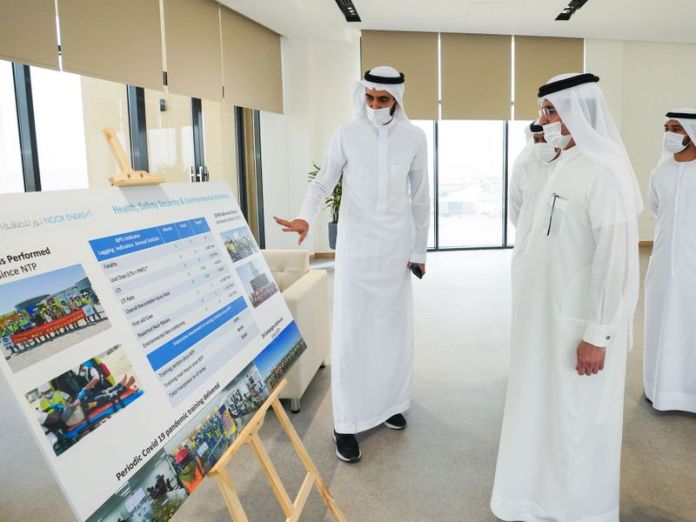 Clean energy
The fourth phase is the largest single-site investment project that combines CSP and photovoltaic technology using the IPP model, and is rated for 950MW. It will use 700MW of CSP (600MW from a parabolic basin complex, 100MW from the solar power tower) and 250MW from photovoltaic solar panels.

On its completion, the project will have the largest thermal storage capacity in the world of 15 hours, allowing for energy availability round the clock. The fourth phase will provide clean energy for around 320,000 residences and reduce 1.6 million tonnes of carbon emissions every year.

This project covers 44 square kilometres and has broken many world records, including the lowest Levelised Cost of Electricity (LCOE) of 7.3 cents per kilowatt-hour (kWh) for the 700MW CSP, and 2.4 cents per kWh for the 250MW photovoltaic solar panels.