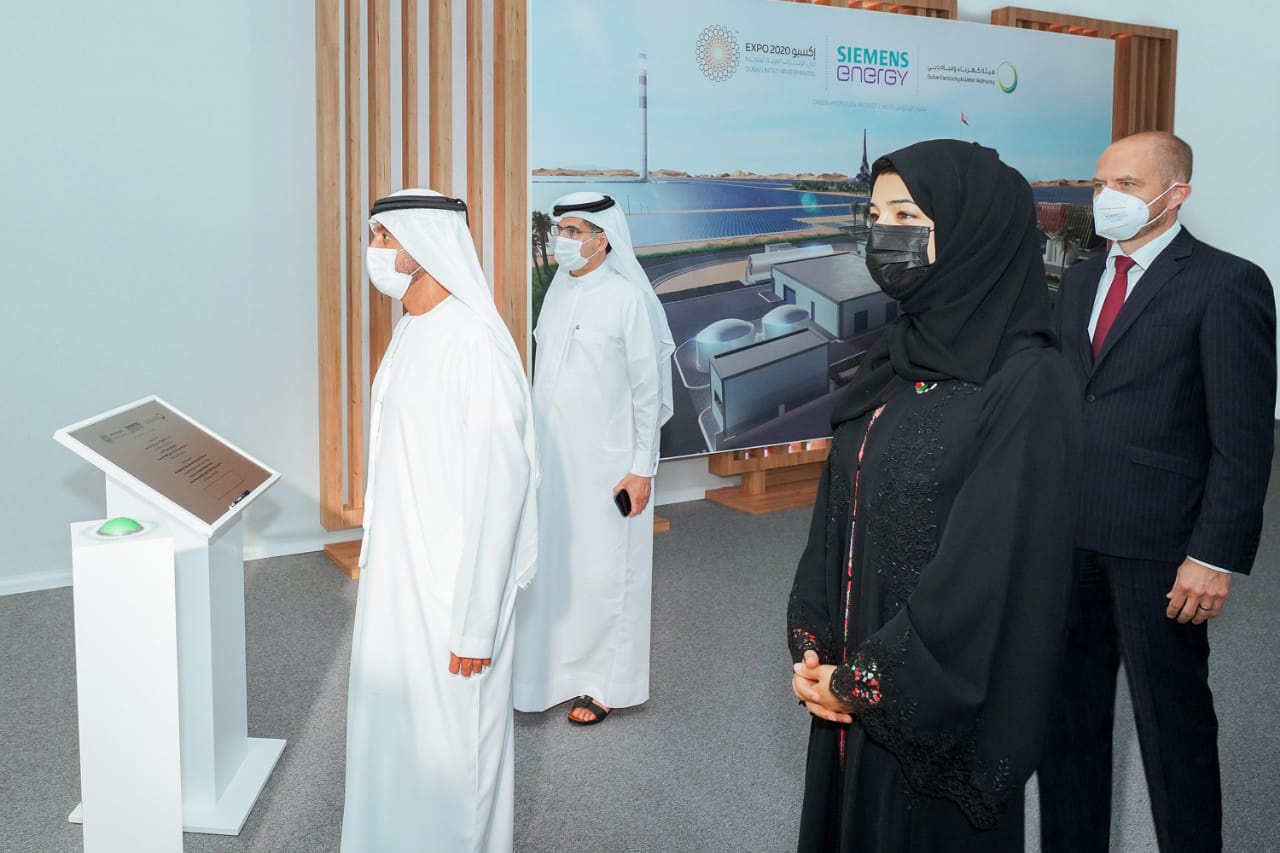 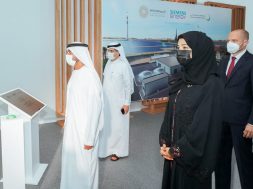 First-of-its-kind project in the MENA region was developed in collaboration with DEWA, Expo 2020 Dubai and Siemens Energy

His Highness Sheikh Ahmed bin Saeed Al Maktoum, Chairman of the Dubai Supreme Council of Energy and Chairman of the Expo 2020 Dubai Higher Committee, has inaugurated the Green Hydrogen project at the Mohammed bin Rashid Al Maktoum Solar Park in Dubai, marking a new achievement for the emirate as a leader in renewable energy.

Commenting on the occasion, His Highness Sheikh Ahmed said: “The launch of pioneering initiatives in the fields of development is driven by the vision of His Highness Sheikh Mohammed bin Rashid Al Maktoum, Vice President and Prime Minister of the UAE and Ruler of Dubai, which seeks to strengthen the UAE’s leadership across various fields.

These initiatives seek to ensure people’s happiness and wellbeing and provide solutions to challenges that may hinder our development journey.”

The project, implemented in collaboration with DEWA, Expo 2020 Dubai and Siemens Energy, is the first solar-driven green hydrogen producing facility in the Middle East and North Africa (MENA) region.

In his keynote speech, HE Saeed Mohammed Al Tayer said: “This pioneering project is part of our efforts to realise the vision of His Highness Sheikh Khalifa bin Zayed Al Nahyan, President of the UAE;

Al Tayer said that 2021 has witnessed important developments in the hydrogen sector. His Highness Sheikh Mohammed bin Rashid Al Maktoum recently approved a UAE system for hydrogen fuel-powered vehicles, which aims to develop the Green Hydrogen economy in the UAE, open local markets to hydrogen-powered vehicles and encourage an increase in environment-friendly vehicles.

The system is the cornerstone for encouraging the use and licensing of vehicles, facilities and equipment related to hydrogen fuel and will contribute to achieving sustainable growth that balances the environmental, economic and social aspects.

This project to produce hydrogen using solar power also supports the Dubai Clean Energy Strategy 2050, to provide 75% of Dubai’s total power capacity from clean energy sources by 2050 as well as the Dubai Green Mobility 2030 initiative, which aims to stimulate the use of sustainable transport.

“In Dubai, we have a clear direction for the energy sector. It includes expanding the use of clean energy and employing digital transformation, smart grids, the tools of the Fourth Industrial Revolution and disruptive technologies, for their impact on the energy and water sectors, Al Tayer added.

Al Tayer explained that with this pilot plant, DEWA aims to demonstrate the production of green hydrogen from solar power, storage and re-electrification. This is a system that allows for buffering renewable energy production, both for fast response applications, as well as for long-term storage.

The plant has been built to accommodate future applications and test platforms for the different uses of hydrogen, including potential mobility and industrial uses.

DEWA has already explored and developed a pilot project for green mobility using hydrogen that can be executed in the near future, in addition to a number of studies, business strategies and a potential roadmap for hydrogen usage. DEWA is building expertise, experience and capabilities to contribute in shaping the clean hydrogen future of the UAE.

Al Tayer thanked DEWA’s partners: Expo 2020 Dubai and Siemens Energy, commending their efforts in implementing the project to the highest standards of quality, safety and efficiency.

“While we are proud of DEWA’s achievements amid the challenges the world is facing due to the pandemic. We will work to innovate unique experiences that enhance the happiness of all stakeholders and contribute to making Dubai the happiest and smartest city in the world.

We will also work to make this year, which marks the Golden Jubilee of the UAE, the starting point for the UAE towards more progress, growth and prosperity.

We will work to proactively innovate solutions for the challenges of the next 50 years, in order to achieve the vision of our wise leadership and make the UAE the world’s leading nation by its Centennial in 2071,” concluded Al Tayer.

HE Dr. Sultan bin Ahmad Sultan Al Jaber said that being an early adopter of a hydrogen economy will be instrumental in achieving sustainable economic growth in the UAE.

“The Green Hydrogen Project represents a major step forward in this direction and will greatly accelerate our production of renewable and clean energy sources and contribute to our on-going climate action efforts.”

Al Jaber added that increasing investments into research and development into the capture, storage and production of green hydrogen will greatly enhance national efforts to reduce the impact of climate change on a local, regional and international level.”

“The UAE’s sustainability efforts have benefitted greatly from the bold vision of the nation’s leadership which has always encouraged close collaboration between local and federal entities, and the public and private sector.

The cabinet’s approval of the UAE’s hydrogen vehicle system, in March – a project proposed by the Ministry of Industry and Advanced Technology – exemplified how the government is promoting a culture of conservation by striving to strike a balance between economic growth and environmental protection,” he said.

The Minister of Industry and Advanced Technology and UAE Special Envoy for Climate Change congratulated the nation’s leadership, DEWA and its partners for launching this vital project, which once again highlights the UAE’s proactive efforts to dramatically reduce carbon emissions and boost sustainable development.

“The UAE is one of the leading countries globally in renewable energy,” said HE Suhail bin Mohammed Faraj Faris Al Mazrouei. “The country has adopted state-of-the-art innovations to drive sustainable development and protect the environment.

These innovations are key to combat climate change and mitigate global warming,” he added, noting that the UAE is one of the first countries that ratified the Paris Agreement for climate change.

Al Mazrouei added that the UAE is a conventional hydrogen producer and possesses a vast experience in this field, making it one the leading countries in hydrogen.

The UAE’s future plan is to utilise hydrogen to produce energy and provide reliable and affordable energy with a low carbon footprint. This will greatly support national economies and sustainable development in line with the country’s directives for the next 50 years.”

HE Dr Abdullah Belhaif Al Nuaimi said: “Advancing the energy transition is a strategic priority for the UAE in line with its commitment to developing the green economy and tackling climate change. Innovative green hydrogen solutions are a key driver of the diversification of energy sources and increasing reliance on clean power.”

“According to the International Energy Agency (IEA), the demand for hydrogen as a power source has grown threefold in the past few decades, and its global production is estimated at 70 million metric tonnes annually.

As a result, the costs of producing hydrogen are projected to fall by 64 percent by 2040. DEWA’s inauguration of the Green Hydrogen project represents a momentous milestone in positioning the UAE on the global map of hydrogen markets. The project will reinforce the country’s efforts to protect the environment, combat climate change and achieve carbon neutrality,” added Al Nuaimi.

HE Reem bint Ibrahim Al Hashemy said: “The Green Hydrogen Project is leading by example, showing how technology and collaboration can help build a cleaner, safer and healthier future for everyone.

It epitomises the shared desire of Expo 2020 Dubai, DEWA, our Official Sustainable Energy Partner and Siemens Energy to develop a global culture of innovation and deploy life-changing ideas and technologies around sustainability.”

“Expo 2020 congratulates all those involved, and believes this innovative project will inspire many more creative solutions that tackle some of the greatest challenges facing our planet.

In less than five months, we will celebrate these ground-breaking collaborations, showcasing the UAE’s commitment to the Sustainable Development Goals and creating a meaningful legacy that will have a positive impact beyond the site and the six months of Expo,” added Al Hashemy.

As the first industrial-scale facility to produce green hydrogen in the Middle East and North Africa, it is an important milestone of the energy transformation. We look forward to working together to decarbonize industries that are hard to abate with renewable energy alone.”

Electrolysis of water is the separation of water into oxygen and hydrogen using an electric current. A DC electrical power source is connected to two electrodes, which are placed in the water and separated by a Proton Exchange Membrane (PEM).

The membrane allows the transfer of Hydrogen ions (Protons) produced by the electrochemical water splitting from the anode to the cathode. Protons will recombine with the electrons flowing through an external circuit to produce H2 molecules in gaseous form. Oxygen gas will appear at the anode through this electrochemical reaction.

This technology allows the storage of large amounts of energy for long periods. Hydrogen can be used for re-electrification through gas motors, gas turbines and fuel cells.

It can also be used as a feedstock for the chemical industry (e.g., ammonia, syn-fuels, green-chemicals, etc.), as fuel for transportation, a reducing agent for the steel industry, to produce heat for industrial processes, or as gas for residential heating and cooking purposes, and also as energy for export.