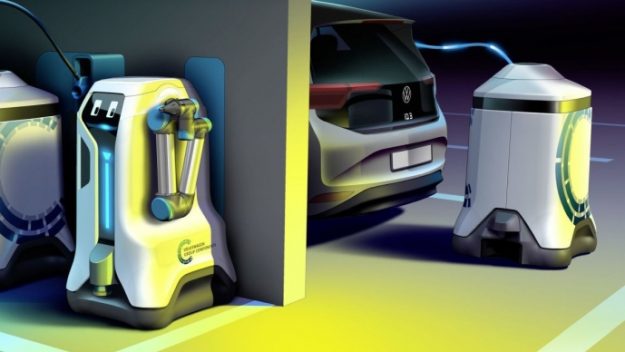 Volkswagen Dreams Up Robot That Brings Charger to Your Parked EV 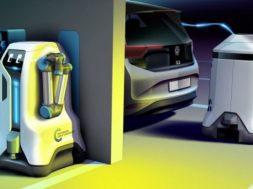 Volkswagen Dreams Up Robot That Brings Charger to Your Parked EV

EV sales have really picked up in the last few years, but there are still a few drawbacks that keep them off some car buyers’ shopping lists. One of those is that it’s not always easy to find a charger.

Volkswagen is working on a solution to that very issue: a robot that brings the charger right to your vehicle.

It’s intended for use in parking structures. Today, EV owners have to hope that there’s a dedicated parking stall available that also has access to a plug. If they’re all occupied, you’re out of luck.

The VW robot would allow drivers to park the EVs anywhere within its range. If a driver wants to recharge, the robot can be summoned by making a request through a mobile app. Even if the owner forgets, the EV itself could ask to be topped off without human intervention via vehicle-to-everything (V2X) communication with the bot.

The design you see here is an update to one that was first revealed back in 2017. Originally, the mobile charger was a single autonomous unit with built-in battery packs.

Now Volkswagen has separated the charging system into two units: the robot attendant and portable “battery wagons” with a capacity of about 25 kWh. The change frees up the robot to connect batteries to multiple vehicles at the same time — instead of having to sit around idle while a single EV charges.

Those vehicles will recharge faster, too. VW’s battery wagons support DC quick charging up to 50kW.

Volkswagen’s Mark Möller sees the autonomous charging system as a real game-changer. “With this, we are making almost every car park electric, without any complex individual infrastructural measures,” he said.

While the company has yet to start manufacturing the charging robots, Möller says that they could quickly become a reality “if the general conditions are right.” Presumably that means if there are enough parking structure owners who think this is a better alternative to installing a bunch of individual charging stations — and enough batteries available.

0
1   0
previous Only 1,071 EVs sold in India between April-October
next Chinese electric bikes disguised as Vietnamese goods into US to enjoy low duty