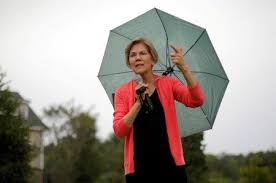 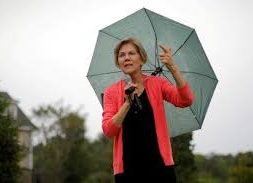 WASHINGTON (Reuters) – U.S. Senator Elizabeth Warren on Tuesday challenged her rivals for the 2020 Democratic presidential nomination to commit to transition the United States fully to clean energy over the next decade for electricity, vehicles and buildings.

Warren, one of 20 Democrats vying to take on President Donald Trump in November 2020, issued the challenge in a comprehensive clean energy plan released ahead of a 7-hour CNN Town Hall on Wednesday at which 10 candidates will discuss how they would tackle climate change.

Her climate strategy weaves together several policies she has sprinkled into other proposals she has rolled out, from agriculture to tribal lands to manufacturing. It also incorporates a clean energy plan she adopted from Washington Governor Jay Inslee, who made climate change the centrepiece of his White House bid before dropping out of the race late last month.

Inslee’s clean energy strategy – which had been billed as the gold standard by environmental advocates – set a 10-year plan to achieve 100% clean energy by slashing carbon emissions from U.S. electricity generation, vehicles and buildings.

“While his presidential campaign may be over, his ideas should remain at the centre of the agenda,” Warren wrote in a post for the website Medium.

“Today I’m embracing that goal by committing to adopt and build on Governor Inslee’s 10-year action plan to achieve 100% clean energy… and I’m challenging every other candidate for President to do the same,” she wrote.

All of Warren’s Democratic rivals who will participate in the climate change town hall have at least committed to achieving net-zero greenhouse gas emissions by 2050. But each advocates different steps to get there.

Vermont Senator Bernie Sanders, for example, calls for the electricity and transportation sectors to be fuelled by 100% percent renewable energy by 2030. Former Vice President Joe Biden’s climate plan calls for 500,000 more electric vehicle charging stations nationwide by the end of 2030.

Warren’s proposal would commit $3 trillion over 10 years, in part paid for by reversing Republican tax cuts passed in 2017 that largely benefit businesses and the wealthy. It aims to bolster efforts to reach 100% zero-carbon pollution for all new buildings by 2028, 100% zero emissions for most new vehicles by 2030 and 100% zero emissions in electricity generation by 2035.

Jamal Reed, a spokesman for Inslee, said the governor’s staff had advised Warren’s campaign and others on climate issues and Inslee is “particularly impressed the Senator Warren is adopting his aggressive targets.”

Warren, a Massachusetts senator, noted that her push to transition to clean energy would require retrofitting buildings, re-engineering the electrical grid and adapting manufacturing.

“For too long, there has been a tension between transitioning to a green economy and creating good, middle class, union jobs,” she wrote.

Warren said her administration would not ask coal and other workers to make the “impossible choice” between jobs with good wages and benefits and “green economy” jobs that pay less, with fewer benefits. The jobs created by her climate plan would be unionized, and training, early retirement benefits and other protections would be provided to current coal workers.

She would also overhaul the Federal Energy Regulatory Commission, which regulates the U.S. electrical grid, replacing it with a Federal Renewable Energy Commission charged with reducing greenhouse gas emissions.