It is desirable to transit from public transport based on the rather inefficient internal combustion engine to e-buses. It is notable that the ministry plans to procure more than 5,000 e-buses for inter-city travel from next fiscal. Estimates suggest that by phasing out diesel buses, state transport corporations would be able to bring down their cost of operations by almost 50%. The government needs to leverage resources from the Clean Energy Fund, and also tap multilateral funding for the express purpose of making the planned transition smooth and cost effective. The change to e-buses would doubtless have substantial macroeconomic and environmental benefits as well. The move can drastically reduce our crude oil imports in the medium term and beyond, and pollution abatement from vehicular exhausts is likely to be much more immediate, especially if we strive to purposefully reduce the carbon footprint in transportation by opting to recharge e-buses with renewable energy like solar power. The new bus ports proposed clearly need to have facilities for charging e-buses via solar panels, and we need such charging along highways.

In tandem, we also need a package of incentives for making ebuses. It would make sense to reduce GST on e-vehicles and batteries, and set a firm timeline to move to all-electric bus fleets in the foreseeable future. 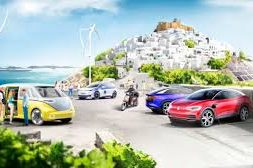