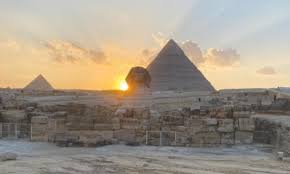 What you don’t know about sun alignment phenomenon in Egypt

What you don’t know about sun alignment phenomenon in Egypt

CAIRO : 25 October 2020: On October 22 of every year, scientists renew their interest in the astounding progress that the Pharaohs of ancient Egypt reached in the field of astronomy, thanks to the sun alignment phenomenon, where the sun illuminates the face of Ramses II statue in Abu Simbel.

The phenomenon was discovered in 1874 with sunrise, and within twenty minutes the sun-rays penetrated the entrance to the temple, until they reached a small room that contained a number of statues.

The solar phenomenon was witnessed more than once in various pharaonic temples, and was observed Wednesday in two different locations, where the sun illuminated the statue of the deity Amun Ra in the Temple of Karnak in Luxor, southern Egypt, as well as the Qarun Palace in the city of Fayoum.

Here is a list of locations where the solar phenomenon takes place annually nationwide:

Karnak Temple: When this phenomenon occurs at Karnak Temple, it is called the “winter solstice” and takes place in conjunction with the birth anniversary of the most important ancient Egyptian deity “Ra”, the Sun God.

When constructing the Karnak Temple, the Pharaos made precise calculations and left nothing for chance. The ancient Egyptians were interested in setting certain standards and specific astronomical calculations, to announce this phenomenon every year at the start of the winter season.

Hatshepsut Temple: On the same day of the winter solstice, thousands of tourists and Egyptians observe the phenomenon of the sun illuminating the Deir el-Bahari temple, the most important temple of Queen Hatshepsut located on the western mainland in Luxor, in addition to observing the solar phenomenon of the Karnak Temple from a different angle.

Abu Simbel Temple: On October 22 and February 22 of every year, the sun illuminates the face of the statue of King Ramses II, the greatest king of ancient Egypt, in Abu Simbel, located in the city of Aswan in southern Egypt.

Qasr Qarun (Qarun Palace): This astronomical phenomenon was also observed in the Qasr Qarun Temple, in the city of Fayoum. On December 21 of each year, a major celebration is held to witness the great cosmic phenomenon, where the sun illuminates Quds el-Aqdas (Holy of Holies) inside the Qasr Qarun temple.

Dandara Temple: This natural phenomenon extended to the temple of Dandara in the governorate of Qena. The sun illuminates the chapel of the Divine Birth House at the Temple of Dandara.

Every year on February 4 and November 8, hundreds of tourists watch the pharaohs sanctify the flag, with the sun illuminating the feast of the deity Horus.

Temple of Hibis: The sun’s rays illuminate the inside of the Holy of Holies of the ancient Temple of Hibis, located in the New Valley, on September 6 and April 7 annually.

The Great Sphinx: The construction of the Sphinx to the east was not a mere coincidence. Rather, the ancient Egyptians wanted to announce certain seasonal changes with the solar phenomenon, namely the spring on March 21 and the autumnal equinox on September 23.