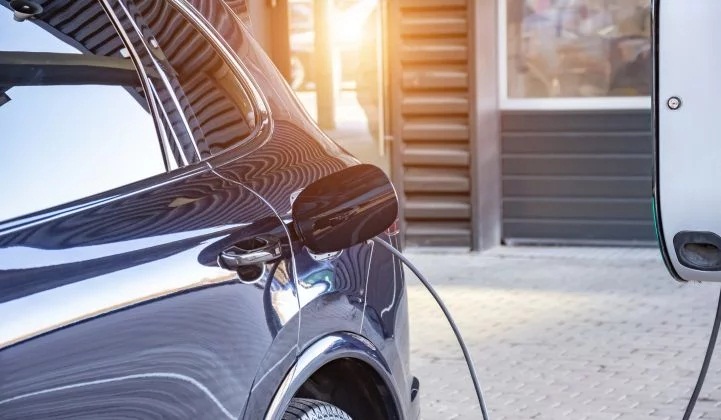 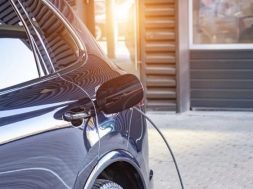 Home battery systems can help during power outages. So can the battery packs rolling around in electric vehicles.

Last month’s preventative power shutoffs in California highlighted the vulnerability of the electricity grid to threats exacerbated by a changing climate.

In the wake of the forced outages, much has been written about the ability of solar PV arrays working in tandem with stationary battery storage systems to keep the lights on when the grid goes down. But what about the mobile battery packs carried in the hundreds of thousands of electric vehicles now on the road in California?

For much of any given day, EVs are parked in garages or at offices. When paired with a power control system, the battery packs in those EVs are functionally little different than a stationary battery system.

Nissan, as one example, estimates that its all-electric Leaf, when connected to a vehicle-to-home system, can power an average home in Japan for two to four days depending on whether the homeowner drives the standard (40 kilowatt-hour) or extended-range e+ (62 kilowatt-hour) next-generation Leaf.

According to Nissan, the electric vehicles it has manufactured that are now on the road contain a combined total of more than 10 gigawatt-hours of storage potential.

California officials seeking guidance on how EV batteries can be enlisted for emergency response could look to Japan, where EVs have been deployed in disaster zones to restore power to critical facilities for nearly a decade.

Nissan sent 66 first-generation Leafs to the northeastern coast of Japan in the wake of the March 2011 Tohoku earthquake and tsunami.

“Medical professionals at an evacuation center were the first ones who approached us about possibly using them as backup batteries for heating and other purposes,” recalled Ryusuke Hayashi, Nissan’s senior manager of EV operations. “That experience triggered Nissan to accelerate development that enables EVs to share the energy stored in their batteries with homes, buildings and communities.”

In the intervening years, Nissan has partnered with local governments and the private sector in Japan to make Leafs available to restore power in emergencies. Examples of such partnerships include agreements with municipalities to make Nissan EVs their official vehicles, making test-drive EVs from local dealers available for free after disasters, and striking a deal with a chain of convenience stores to use Leafs as a power source during grid outages.

Most recently, in September 2019, Nissan sent more than 50 Leafs to power community centers in Chiba prefecture, east of Tokyo, in response to grid outages caused by Typhoon Faxai.

Since electric vehicles do not produce exhaust, they can be safely operated indoors.

Montreal-based startup Ossiaco plans to introduce its V2H platform, dcbel, in California in March 2020. The system, a bidirectional charger with a built-in solar inverter, works with any electric vehicle with a CHAdeMO DC fast-charging port. No onboard software from the vehicle is required to operate the system.

“Initially, what it’s going to offer is really an unparalleled [level of] resilience for homeowners and small businesses to be able to keep their homes powered through grid outages,” Ossiaco representative John Sarter told GTM. Sarter also manages the North Bay Community Resilience Initiative for the Clean Coalition, a California-based nonprofit organization.

While Ossiaco appears to be out in front in bringing V2H to the California market, expect more entrants to follow. According to Kelly McCoy, a research associate on Wood Mackenzie Power & Renewables’ grid edge team, other companies to watch in the space include vehicle-to-grid startups Fermata Energy and Nuvve.

Ossiaco is working on agreements with automakers to determine the power export potential of their EV models when paired with the dcbel. Under an agreement reached with Nissan, the automaker’s EVs can export up to 10 kilowatts of continuous power using the Ossiaco V2H platform.

Sarter said 20 dcbel units will be made available for pilot projects in California next year. Ossiaco has applied for grant funding to launch pilots with Silicon Valley Clean Energy, a community-choice aggregator (CCA). The company is also working to make the dcbel available at the Advanced Energy Center, a hub for emerging energy technologies that Sonoma Clean Power plans to open in downtown Santa Rosa in 2020.

Three CCAs, including Silicon Valley Clean Energy, along with municipal utility Silicon Valley Power, issued a solicitation for 30 megawatts of behind-the-meter batteries. The solicitation calls for projects, which are intended to enable low-income and medically vulnerable customers to maintain power during grid outages, to be underway in time for the 2020 fire season.

A Pacific Gas & Electric Company report released in February 2018 confirmed the technical feasibility of V2H and “its ability, when purchased and installed by a customer, to cost-effectively respond to a demand response event from a program administrator standpoint.” At the same time, the authors noted the “lack of commercially available technologies for a full V2H system in California today.”