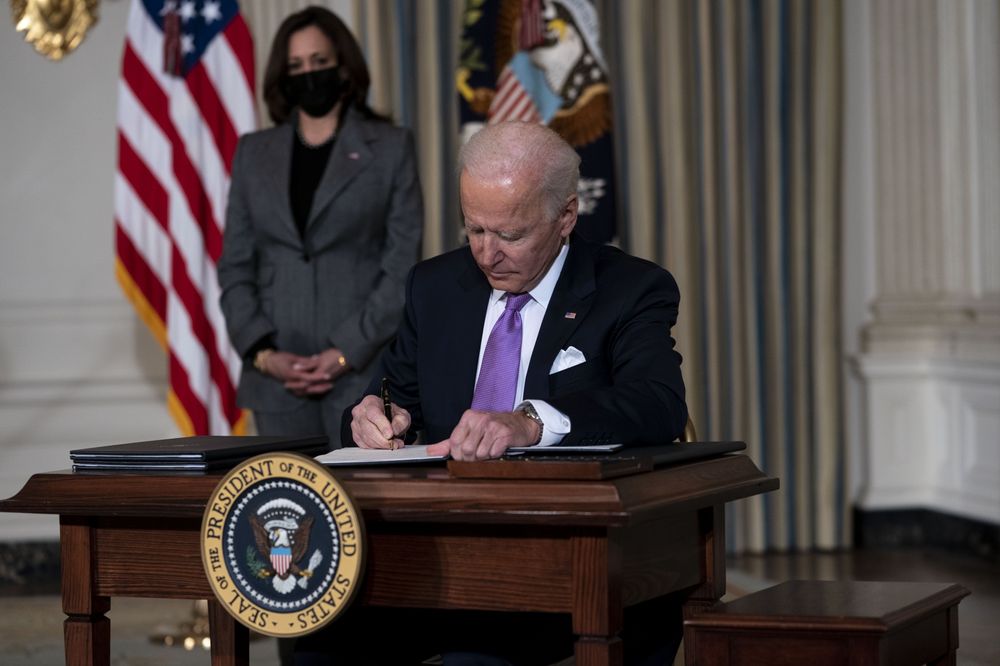 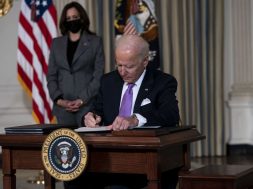 Providing funding to poorer nations to undertake climate action is not only a moral and legal responsibility for developed countries, but also a strategic investment in a cleaner and more resilient world. Such support pays dividends by reducing the severity and costs of climate impacts, including extreme weather, ecosystem loss and political instability both at home and abroad.

Over the last four years (see our coverage from 2017, 2018, 2019 and 2020), Congress has sought to maintain U.S. finance for international climate action, in the face of repeated efforts by the Trump administration to drastically cut funding back. But while the United States has been treading water on climate finance, the rest of the world has moved ahead, and the climate crisis is only intensifying.

In 2009, developed countries made a collective commitment to mobilize $100 billion a year in climate finance for developing countries between 2020 and 2025. As the largest cumulative greenhouse gas emitter, the United States has not been doing its fair share towards this goal.

It is time for the United States to not just catch up, but to lead on climate finance — for the country’s own sake as well as for others’. Over the past five years, the United States has suffered $600 billion in direct losses from climate and weather-related events. Yet just $2.5 billion, or 0.07% of the federal budget each year, supports international efforts to address climate change.

President Joe Biden has made climate change a top priority, and this week his Special Envoy for Climate, John Kerry, told the international community “we intend to make good on our climate finance pledge.” Biden’s recent Executive Order, Tackling the Climate Crisis at Home and Abroad, charged his team to develop a climate finance plan in the next three months.

Here we look at key areas of climate finance that the administration should prioritize to bolster U.S. influence and impact as it reengages in global climate action.

First, it’s important to look at what the fiscal year 2021 spending package passed by Congress in December 2020 did for international climate funding. This provides the baseline from which the Biden administration must build. 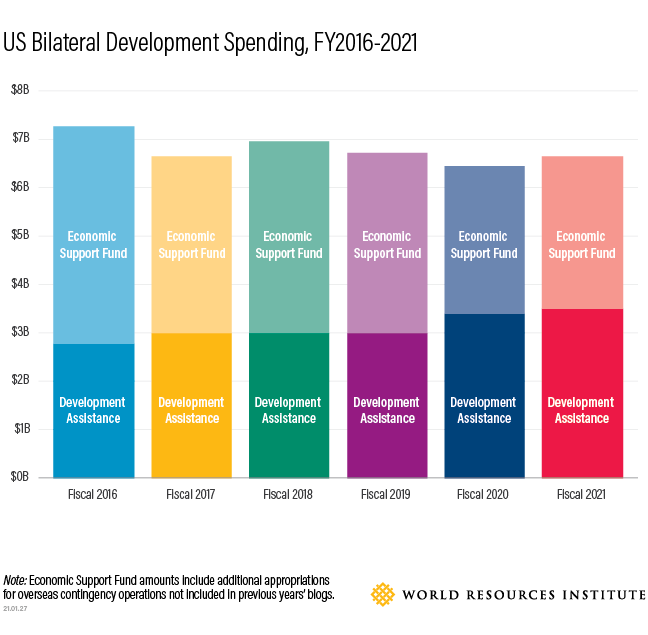 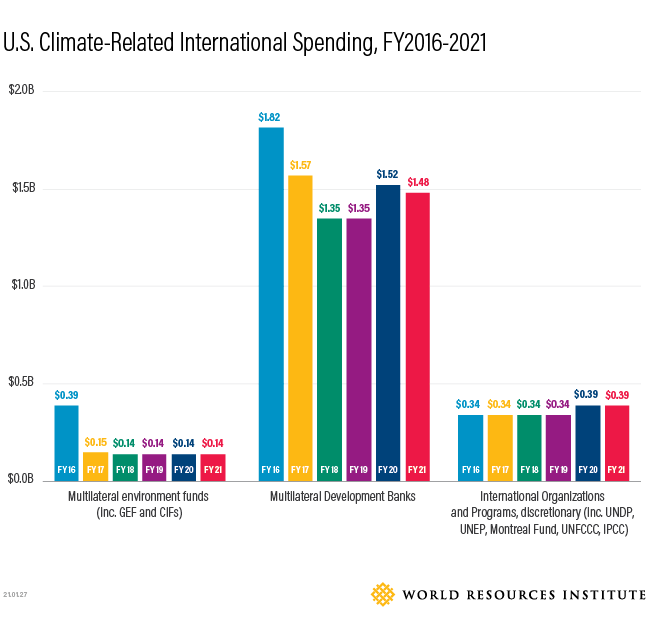 Hard work by many members of Congress ensured overall U.S. climate finance did not significantly decline during the Trump administration. But as other countries have continued to scale up their funding the U.S. has still fallen down the rankings. The Biden administration must make up for lost time by rapidly scaling up climate funding and restoring the country to a leading role.

Next Steps on Climate Finance for the Biden Administration

U.S. reengagement on climate finance is not only a matter of how much, but also where funding is allocated. The complex landscape of climate finance has many possible channels, but some have more impact than others. Here are five top priorities for the Biden administration on international climate finance:

1. Fulfill and Double the US Pledge to the Green Climate Fund

The Fund gives developing countries an equal voice in decision-making, and it has some of the strongest policies of any financial institution promoting gender responsiveness and Indigenous peoples’ rights. It delivers funding through a diverse range of more than 100 organizations, from major U.S. investors to local businesses and nonprofits in developing countries. While the GCF has faced problems with slow decision making in the past, a new voting procedure instituted in 2019 has led to far more efficient delivery. Last year the Fund approved a record $2 billion for 37 projects, more than any other international climate fund.

Obama pledged $3 billion to the GCF in 2014 but only delivered $1 billion before leaving office, meaning the United States still owes $2 billion from that original pledge. In 2019, most other developed countries made a new round of pledges, with many doubling their original commitments.

Resumed U.S. contributions to the GCF would deliver the most diplomatic bang for the buck. The GCF was a key part of the grand bargain that underpinned the Paris Agreement: that poorer countries would undertake more climate action but needed increased support from richer countries to do so. Developing countries, as well as the U.S. climate movement, have made clear that ambitious backing for the GCF is a key test of Biden’s recommitment to global climate leadership.

The GCF now has significant support in Congress: for the first time last year, the House of Representatives requested funding for the GCF. With Democrats also gaining control of the Senate, and members of the pivotal Appropriations Committee backing the Fund, the potential for GCF appropriations has never looked better. To get back up to speed, Biden should deliver the outstanding $2 billion from the country’s existing pledge and make a new, more ambitious commitment of $6 billion to match peers who have already doubled their pledges.

2. Contribute to Other Multilateral Climate Institutions

Similarly, the United States should make a new pledge to the Least Developed Countries Fund — which provides adaptation funding to the poorest countries — at a similar level to the $51 million it pledged in 2015.

In 2021, countries will begin negotiating the Global Environment Facility’s eighth replenishment, for 2022-2026. The United States should come prepared with an ambitious pledge that makes up for not increasing contributions at the last replenishment in 2018. Biden should also continue support for the Montreal Protocol Multilateral Fund, and restore full funding for the IPCC and UNFCCC.

3. Integrate Climate Throughout All Development Funding

Biden promised to “fully integrate climate change into foreign policy.” To ensure a coherent approach, his administration must coordinate across the government agencies that extend development assistance to other countries, including the Departments of State and Treasury, the U.S. Agency for International Development and the U.S. Development Finance Corporation. The administration should work with Congress to increase bilateral funding allocated in the annual appropriations bills for climate adaptation, renewable energy and sustainable landscapes.

In addition to these specific allocations, the administration should also mainstream climate across all its development spending. This does not mean cutting spending from other priorities such as healthcare, education and gender equality, but that as part of an overall increase in the development assistance budget, all spending would take into account the impacts of projects on the climate — and of climate change on projects. This includes ending overseas financing for fossil fuels as part of the administration’s commitment to eliminate fossil fuel subsidies.

Previous efforts by the Obama administration to mainstream climate were reversed by Trump, so the Biden administration should work closely with Congress to ensure these reforms have longevity.

4. Push Development Banks to Align with the Paris Agreement

The multilateral development banks are major climate finance contributors. But they also have a long history of financing fossil fuels. In 2018, these banks committed to align their activities with the Paris Agreement, but they have made slow progress. The heads of both the World Bank and the Inter-American Development Bank are Trump appointees, so this is perhaps unsurprising.

The United States is a major shareholder in most multilateral development banks. The banks’ leadership are likely to ask for increased funding from the Biden administration, which gives the United States significant influence. For example, last year House Financial Services Committee chair Rep. Maxine Waters secured important reforms to increase accountability and transparency of the World Bank’s private sector arm as part of a U.S. capital increase.

The Biden administration and Congress are in a strong position to push multilateral development banks to move faster toward Paris alignment, including ending funding for fossil fuels, and ensuring their pandemic recovery funding helps countries rebuild cleaner, more resilient societies. The administration should use all the tools at its disposal, including updating the Treasury guidelines for how U.S. representatives vote in development banks.

President Biden’s January 27th Executive Order provides a mandate to deliver on all four of these priorities. The administration’s forthcoming climate finance plan should set out concrete steps for how the United States will meet its responsibilities and become a leader in supporting developing countries to take ambitious action, which benefits both the United States and the world.

0
0   0
previous Many companies staying away from investments that generate carbon: Bill Gates
next General Motors Pledges a Zero-Emissions Light-Duty Vehicle Fleet by 2035