Home Americas Analysis: Green is the color of money for funds betting on a Biden win 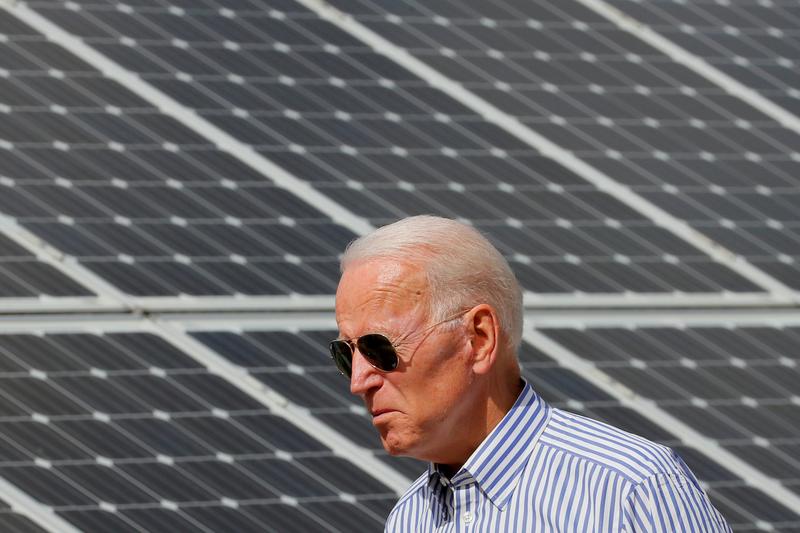 NEW YORK: Fund managers betting that green-type stocks with environmental, social and governance (ESG) credentials will benefit from an expected win by Democrat Joe Biden in the U.S. presidential election are also looking at a swathe of other companies expected to rise along with them.

Portfolio managers from firms including Gabelli, Fairpointe Capital and Eaton Vance are moving into the shares of companies ranging from semiconductors to industrial equipment to utilities in anticipation of a future Biden administration. The former vice president leads President Trump by 10 points nationally.

Biden has proposed spending here $2 trillion over his first four-year term to combat climate change, including upgrading buildings for energy efficiency and installing more than 500,000 electric vehicle charging stations by 2030.

That has boosted a number of stocks and ETFs from solar to clean energy. The Invesco Solar ETF TAN.P has risen nearly 20% so far this month, the VanEck Vectors Low Carbon Energy ETF SMOG.P is up 11.3%, and the iShares Global Clean Energy ETF ICLN.O is up 14.4%. ​”If there is a blue sweep and it empowers Democrats to put through a significant fiscal stimulus, you would expect a fair amount of that would have ESG-friendly initiatives,” said Chris Dyer, director of global equity at Eaton Vance. “Some of those stocks that benefit might not be traditional ESG stocks.”

Among his portfolio holdings is French electrical equipment group Schneider Electric SE SCHN.PA, which sells products ranging from electrical car chargers to home automation systems. He sees upside in those shares which are up less than 3% over the past month – far less than some of the clean energy and solar companies.

“We’re looking for companies that are involved in the renovation of buildings and new buildings that are particularly geared into energy efficiency,” he said.

Overall, ESG funds have taken in a net of nearly $21 billion in new flows through the second quarter of this year, just under the annual record of $21.4 billion in inflows notched last year, according to Morningstar data.

That popularity will likely increase during a Biden administration, pushing share prices higher among companies that are popular in ESG funds, said Cheryl Smith, portfolio manager at Trillium Asset Management.

Her funds have been adding to positions in semiconductors and automotive components that would benefit from a push toward electric vehicles, she said.

“The clean energy space is an obvious space where the market is already pricing in a change in Washington, but there’s still a lot to gain in the whole automotive segment and industrial equipment” sectors, she said.

The $58 million Global X Autonomous and Electric Vehicles ETF DRIV.O is up 5.7% over the last month, well behind the performance of clean energy funds.

While a resounding Democratic victory would likely bolster ESG stocks, that would not necessarily mean fossil fuel and other carbon-intensive companies would be left for dead.

Still, prospects of a higher stimulus bill could revive companies in a wide variety of sectors if the economy rebounds and demand improves, said Christopher Marangi, co-chief investment officer of the Gabelli Value Team.

“The party in power only has so much influence over the economy and winners and losers in a recovery,” he said.