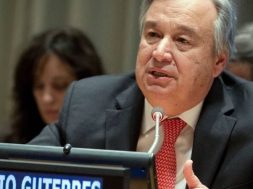 Expressing concern over changes in the weather patterns leading to severe heat waves across the world, UN Chief Antonio Guterras has called on global leaders to come up with concrete plans and strategies for carbon neutrality by 2050 and not “beautiful speeches.”

Expressing concern over changes in the weather patterns leading to severe heat waves across the world, UN Chief Antonio Guterras has called on global leaders to come up with concrete plans and strategies for carbon neutrality by 2050 and not “beautiful speeches.”

Addressing reporters at the UN headquarters on Thursday, the Secretary-General underscored the urgent need for the international community to work collectively on climate change ahead of the upcoming high-level Climate Action Summit here on September 23.

The summit will be preceded by a Youth Climate Summit on September 21.

“I have told leaders, from governments, businesses and civil society, that the ticket to entry is bold action and much greater ambition. I am telling leaders don’t come to the Summit with beautiful speeches. Come with concrete plans – clear steps to enhance nationally determined contributions by 2020 and strategies for carbon neutrality by 2050,” he said.

According to the latest data from the World Meteorological Organization and its climate centre, the month of July at least equalled if not surpassed the hottest month in recorded history, Guterres said.

The UN chief said that the heat wave is even more significant because the previous hottest month, July 2016, occurred during one of the strongest El Nino’s ever and that was not the case this year.

“All of this means we are on track for the period from 2015 to 2019 to be the five hottest years on record. This year alone we have seen temperature records shatter from New Delhi to Anchorag, from Paris to Santiago, from Adelaide to the Arctic Circle,” he said.

The UN Chief warned that if nations do not take action on climate change now, these extreme weather events are just the tip of the iceberg. And that iceberg is also rapidly melting.

Leading scientists from across the world have stressed that nations must limit temperature increases to 1.5 C if they are to avoid the worst impacts of climate change, greenhouse emissions must be cut by 45 per cent by 2030 and carbon neutrality achieved by 2050.

Despite the grim prognosis on climate change, Guterres said that there is some good news and around the world, governments, businesses and citizens are mobilising to confront the climate crisis.

Many solutions are available and are already being implemented. These include the growing use of technology that is rendering renewable energy cheaper than fossil fuels, planting of millions of trees to reverse deforestation and removing carbon dioxide from the environment.

Guterres also highlighted efforts by the finance world that is increasingly pricing carbon risks into their decision-making process and calling on leaders to phase out fossil fuel subsidies.

Leading businesses are recognising that, in order to avoid huge losses, now is the time to move from the grey, polluting economy, to the green economy.

“We need rapid and deep change in how we do business, generate power, build cities and feed the world,” he said.