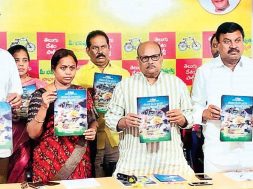 VIJAYAWADA : Even as the Andhra Pradesh High Court stayed the AP Electricity Regulatory Commission’s (APERC) notice to hold a public hearing on December 7 with stakeholders, including power generators, on Discoms’ petition seeking revision of renewable tariff payable to wind and solar power developers, the regulator has scheduled another public hearing for determination of true-up for Retail Supply Business on December 20.

The APERC will also hold another public hearing on the same day on a petition filed by a solar power generator alleging ‘unlawful and arbitrary curtailment’ of generation by the power utilities.In their petition, APSPDCL and APEPDCL stated that the total true-up charges incurred by them in 2018-19 were `4,341.95 crore because of power purchase variation costs.

The beleaguered Discoms noted that while the actual fixed cost incurred was `389 crore less than the approved quantum, the actual variable cost was `4,651 crore more than the approved. So, they contended, while the total approved cost was `26,785 crore, the actual expenditure made by them stood at `31,097 crore (including `50 crore ‘other cost’). The final true-up charges considering the expense true-up and revenue true-up is `4,341.95 crore, they stated.

In this context, the Discoms urged the commission to take into consideration the carrying (forward) charge that they would incur until approval and pleaded “to approve the total true-up required for 2018-19 pertaining to Retail Supply Business.”

Commission to take views of stakeholders on Discoms’ plea

If the Discoms’ plea is accepted by the commission, the additional charges will be collected from consumers concerned. It maybe noted that the Discoms have been facing severe financial burden due to the purchase of power at a high cost and the State government has initiated steps to bring down the same.
Meanwhile, the APERC is also scheduled to take views/suggestions and objections from stakeholders on the petition filed by SBG Cleantech Projectco Pvt Ltd seeking directions to the respondents — Union Ministry of New and Renewable Energy, APTRANSCO, AP State Load Dispatch Centre, APEPDCL and NTPC — to implement the ‘must-run’ status accorded to its solar project in letter and spirit. The petitioner also pleaded the commission to issue an order to the respondents to refrain from ‘illegally curtailing’ the solar energy generated therefrom, and compensate the petitioner for the ‘unlawful and arbitrary curtailment’ of generation.

tags: APERC
0
previous Delhi power cut: Electricity disruptions down by 70% but pinches inverter sellers
next EXPLAINER: Why India's diesel demand is contracting, and what it means