California Legislative Roundup: What Passed, and What Didn’t

California Legislative Roundup: What Passed, and What Didn’t

Our review of the key energy and environmental bills of the state’s just-ended session, from clean energy and batteries to EV charging and green buildings.

California lawmakers ended last week with a long list of energy and environmental bills that they passed — and a shorter list of those that failed to come to a vote.

We’ve already covered the highest-profile bills that managed to win enough votes to move on to Gov. Jerry Brown’s desk for a signature by Sept. 30. Those include SB 100 and its new 100-percent clean energy mandate; SB 700 and its extension of behind-the-meter energy storage incentives; and AB 901, the sprawling and controversial bill to give utilities including Pacific Gas & Electric ways to manage the multi-billion dollar costs of wildfires past and future.

We also covered the failure of AB 813, the “grid regionalization” bill that would have allowed California to take the first steps toward expanding its grid operator CAISO across the Western U.S..

Here are some of the other bills we’ve been tracking through the finish line of this year’s legislative session.

Clean energy advocates won a major victory with the passage of SB 100, which sets a 100 percent-by-2045 zero-carbon energy mandate for the state, and increases the percentage of energy that must come from renewable resources over the next decade.

But another bill aimed at boosting California’s shorter-term renewable procurement failed to come to a vote before Friday’s deadline.

The Solar Energy Industries Association (SEIA) came on as an AB 893 supporter after the original geothermal-only mandate was amended to include short-term solar and wind procurement, saying that the move was needed to fill a gap in the slowing market for utility-scale renewables.

Rick Umoff, SEIA’s California director of state affairs, wrote in a statement that failing to pass the bill — along with the failure of grid regionalization bill AB 813 — represented “missed opportunities to get a jump start on reaching the bold goals set in SB 100. The bills provided a solution that not only is vital to meeting the state’s clean energy goals, but also would have saved consumers money, and it’s disappointing the Legislature did not act on this bill this session.”

Umoff did praise the passage of SB 100 and SB 700, however, and noted that it’s planning to work with lawmakers and regulators “to stimulate near-term solar and job growth through implementation of SB 100 and the state’s integrated resource planning process.”

AB 893 also had promoted the use of “renewable natural gas,” i.e. methane collected from wastewater plants, city dumps, dairy farms and other organic sources. But despite its failure, two other biogas-related bills did pass this session.

SB 1440 authorizes the California Public Utilities Commission (CPUC) to work with the California Air Resources Board (CARB) to develop a biomethane procurement program that will “benefit ratepayers, is cost-effective, and advances the state’s environmental and energy policies.” And AB 3187 (Grayson) will ask the CPUC to open a proceeding next year to consider options to promote in-state production and distribution of biomethane, including recovery in rates of the costs of interconnection infrastructure investments.

Electric vehicles are a critical part of California’s broader carbon-reduction plans — and California’s utilities are in the midst of rolling out multi-hundred million dollar EV charging infrastructure programs to support that growth.

While SB 100’s zero-carbon energy mandate doesn’t specifically include EVs, several EV-related bills passed this session aimed at meeting Gov. Brown’s goal of 5 million zero-emission vehicles on the road by 2030, and bringing greenhouse gas emissions to 40 percent below 1990 levels by 2030.

AB 2127 would direct the California Energy Commission (CEC) to work with the CPUC and CARB on assessing statewide EV charging infrastructure needs, linking the CPUC’s oversight of utility EV charging programs with the CEC’s long-range carbon reduction goals. According to Amisha Rai, senior director for California policy for AB 1722 backer Advanced Energy Economy, the bill “will result in more efficient use of public dollars and smarter implementation of the state’s ongoing ZEV [zero-emission vehicle] efforts.”

And AB 1014 would target ridesharing companies Lyft and Uber, directing CARB and the CPUC to “adopt and implement targets to reduce the amount of greenhouse gases (GHGs) emitted per passenger mile” for ride-sharing vehicles.

California’s decision to close Diablo Canyon, its last operating nuclear power plant, has been accompanied by a debate over how carbon-free nuclear energy can be replaced without increasing the state’s greenhouse gas burden — and how much money PG&E should be able to collect from ratepayers to help the San Luis Obispo region recover from the economic effects of its closure.

With the passage of SB 1090 a week before the end of the legislative session, PG&E was handed a legislative mandate to restore hundreds of millions of dollars of worker retraining and community support called for in the original plan, as well as enshrine zero-carbon replacements for its 2 gigawatts of always-on power.

Assisting communities in managing a transition to clean energy was also the focus of SB 1072, which passed the legislature last week. The bill would create technical assistance partnerships to help low-income and high-pollution communities “access statewide public and other grant moneys for climate change mitigation and adaptation projects that maximize the benefits for the region.”

The Greenlining Institute, a supporter of SB 1072, noted that technical assistance is an important factor in whether or not communities win or lose their grant proposals – and that low-income communities don’t get as much of this technical support as wealthy communities do.

Amidst the controversy surrounding wildfire relief for PG&E, the California legislature also quietly passed two bills that will require insurers to assess homeowners’ property values at least every two years, as well as standardize how insurers explain their wildfire coverage policies to customers.

California’s already lengthy list of efficiency and clean energy regulations for homes, offices, factories and other buildings saw a few new additions this legislative session. The Natural Resources Defense Council highlighted two bills aimed at reducing the greenhouse gas footprint for buildings, which now generate about a quarter of the state’s emissions.

The first, AB 3232, requires the CEC to assess the potential for the state to reduce carbon pollution from residential and commercial buildings by 40 percent from 1990 levels by 2030 – a target that will involve significant retrofitting of existing building stock as well as the improvements mandated for new construction.

The second, SB 1477, will direct the CPUC to spend $50 million a year from cap-and-trade revenue to support two programs. The first, dubbed BUILD (Building Initiative for Low-Emissions Development), will provide incentives for innovative and low-cost methods to improve efficiency and carbon reduction practices for new construction. The second, dubbed TECH (Technology and Equipment for Clean Heating), will provide incentives, as well as customer outreach and contractor training, for low-emissions space and water heating equipment such as heat pumps. 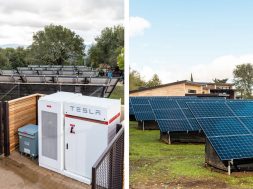