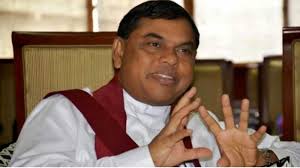 Chairman of the Presidential Task Force on Economic Revival and Poverty Alleviation former Minister Basil Rajapaksa has instructed the Ceylon Electricity Board (CEB) to expedite the construction of 100-kilowatt solar power plants and connect them to 7250 transformers across the country within the next three years.

Ceylon Electricity Board (CEB) Chairman, Engineer Vijitha Herath said that former Minister Basil Rajapaksa, the founder of the Sri Lanka People’s Front (SLPP), had instructed them to expedite the project with the support of the villagers at the local level.

This is in line with the (CEB) and Lanka Electricity Company’s (LECO) project to connect 10,000, 100 kW solar power plants to the Distribution Transformer Network.

Former Minister Basil Rajapaksa also instructed that income generating organizations such as Samurdhi Banks, Rural Banks, Co-operative Societies and Community Network projects operating in the villages should be implemented in such a way that they could invest in this as a project.

He also said that tenders are planned to be obtained at the local level.

He said 50 perches of land, 400 metres away from the transformer is needed for this.

He said investors would be called in through competitive bidding and an investment of Rs.10 million would be required for the entire project.