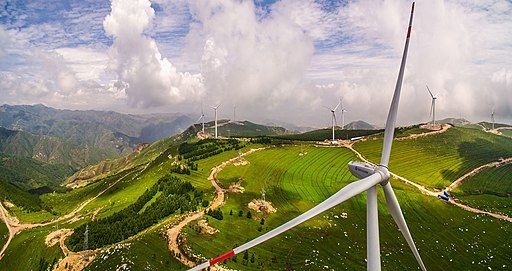 President Xi Jinping surprised the world in September 2020 by announcing to the UN General Assembly that China will aim to peak its carbon emissions before 2030 and achieve carbon neutrality before 2060. A new WRI report finds that China can peak its emissions as early as 2026 and realize enormous economic benefits over the long term by strengthening its climate and energy policies now.

By taking steps in energy, industry, transportation and carbon capture, the nation could save nearly 1.9 million lives and generate nearly $1 trillion (6.5 trillion RMB) in net economic and social benefits in 2050.

With its 2020 emissions-reduction targets already met, our analysis shows that China is also on track to exceed the 2030 targets set out in its first Nationally Determined Contribution (NDC) to the Paris Agreement. This suggests that China could achieve more ambitious emissions reductions for 2030 and significantly enhance the targets in its NDC — including establishing a target for non-CO2 emissions — ahead of the COP26 climate talks in Glasgow, Scotland, in 2021. 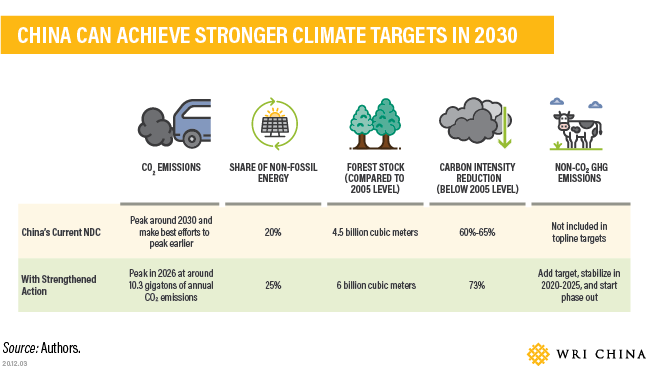 China’s policy choices now, such as in its soon-to-be-released 14th Five-Year Plan (2021-2025), will lock in emissions trends for many years. Our report finds that if China adopts a set of cost-effective decarbonization strategies (referred to as a “strengthened ambition scenario”), the country can also expect to attain stronger economic gains in terms of GDP, government revenues and employment.

Setting stronger climate policies now would generate cost savings of $530 billion in fuel, operation and maintenance expenditures over 30 years. More ambitious climate policies would also reduce particulate emissions, which could improve air quality and help prevent the premature deaths of up to 1.89 million people in 2050.

In addition, such policies would avoid $445 billion in climate damages and help China realize its vision for a greener future by reducing 4.7 gigatons of CO2 emissions compared with a business-as-usual scenario — the equivalent of removing 100 million passenger vehicles from the roads each year.

WRI analysis using the Energy Policy Solutions modeling tool shows it is technologically and economically feasible for China to plateau its annual CO2 emissions at around 10.3 gigatons by 2025. In addition, the share of non-fossil fuels in China’s primary energy consumption could increase to about 20% by 2025 (from 14.3% in 2018).

An earlier WRI study found China can avoid an additional 3 gigatons of non-CO2 greenhouse gas emissions—such as methane, nitrous oxide, and  hydrofluorocarbons (HFCs)—over the next 10 years while reaping development benefits if it takes action right away.

However, to realize these advances, China will need to make changes in its current national policies for energy, industry and more.

During the 13th Five-Year Plan period (2016-2020), China adopted policy measures focused on climate, including establishing a carbon intensity reduction target, advancing a carbon market, accelerating climate adaptation, and raising public awareness of climate change. Our study shows that during the 14th Five-Year Plan period (2021-2025), China can build on these actions to achieve early carbon emissions peaking and get on a net-zero emissions path as quickly as possible.

Four priorities should be the focus: 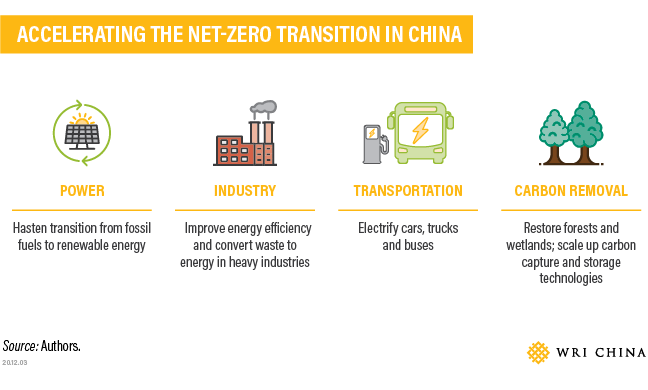 To reduce non-CO2 emissions, China will need to improve its monitoring and reporting of these gases; accelerate cost-effective measures to reduce emissions from chemical production, power systems, coal mining, waste treatment and fertilizer application; and create a policy roadmap to address emissions from sectors such as agriculture and land use.

Economic regions like Beijing-Tianjin-Hebei, Guangdong-Hong Kong-Macao Greater Bay area and Yangtze River Delta can lead the way by peaking carbon emissions as soon as 2025 while creating millions of green jobs. These regions are already China’s most developed, and are well-positioned for low-carbon, high-quality growth over the next five years.

We found that implementing more green policy actions in the Yangtze River Delta — such as increasing land productivity and adding more renewable energy — would allow the region to peak its GHG emissions by 2024. A green economic strategy could raise government revenue to $6 trillion (38 trillion yuan) per year by 2050, 6 times greater than its revenue in 2020. It would also create nearly 3.8 million additional jobs in the region annually, beginning in 2025.

Getting on Track to Net Zero Starts Now

As China moves to finalize its 14th Five-Year Plan and set new emissions-reduction targets, it has an opportunity to shape the lives of its people — not only during the next few years, but for generations to come.

The next five years may well determine if China can achieve President Xi’s vision for carbon neutrality by mid-century. Taking strong action today will help create a stronger, more resilient and prosperous society.