In China’s latest efforts to pit renewable energy against fossil fuels, it is again betting on size.

Resources such as wind and solar don’t stand much of a chance if there isn’t a way to store energy when the wind doesn’t blow and the sun doesn’t shine. So some of China’s biggest state-owned companies are pouring in billions of dollars to build massive projects that will combine the two with energy storage.

The periodic nature of renewables is a challenge because it disrupts the conventional methods for planning the daily operation of the electric grid. The idea with these hybrid projects is that they will allow a more continuous supply of clean power, which will better enable China to reduce its reliance on coal, a major source of smog and climate-warming greenhouse gases.

While these integrated projects are mainly for demonstration purposes at the moment, it signals the direction of development for the industry, said Shen Zhifeng, an analyst at UOB-Kay Hian Holdings Ltd. Future projects “are likely to trend toward this model as costs decline with increasing construction.”

The pairing of wind and solar is a popular option as developers bet that having the two technologies work in tandem can provide more consistent energy generation than having a standalone system. By combining a battery storage solution, the reliability of the electricity supply is further improved.

Mega Projects
State-owned giants working on such projects include GD Power Development Co., which is planning to build a $2 billion project with up to 2 gigawatts of capacity in northern Inner Mongolia. Utility Beijing Jingneng Power Co. will invest in a $3 billion project with 5 gigawatts of capacity. Both will also produce hydrogen — an emerging fuel alternative — using clean energy.

Notwithstanding the fact that China consumes more coal than any other country by far, it has signaled an intention in recent years to become cleaner and greener. It has the world’s biggest renewable energy fleet, but struggles at times to make full use of this capacity due to grid constraints, a situation known as curtailment.

Energy storage remains a crucial part in ensuring the integration of renewable sources onto the power grid, said BOCOM International Holdings Co. analyst Louis Sun. The technology is “inevitable,” but has a long way to go, he added.

BloombergNEF estimates that China will add more than 400 megawatts of new renewable storage capacity this year, about four times the amount in 2019. 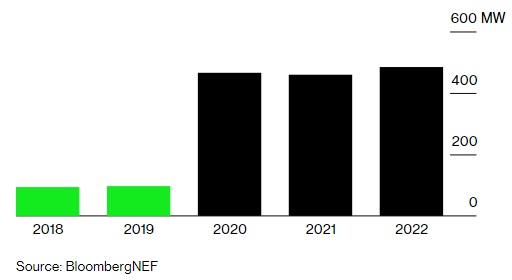 The bulk of the expected increase will come from wind-plus-storage projects in Hunan and Anhui, where provincial grids have agreed to prioritize connection for hybrid projects to ease congestion, BNEF analyst Li Daixin said.

Subsidy Catalyst
The end of renewable energy subsidies is becoming a “catalyst” as developers rush to commission their projects before the deadline and look to improve their chances of financial support by supplementing renewables with storage systems, Li said.

China is not alone in adding storage to renewable energy projects. Japan and Australia deployed more wind-plus-storage projects in 2019, according to Wood Mackenzie Ltd. However, renewable power storage remains a small market for batteries, with more than 90% of production going to electric vehicles and personal electronics.

Whether the technology can be developed on a greater scale depends on government policies and profitability, said WoodMac’s senior analyst Xu Le. “Without subsidies, developers will find it hard to make money from utility storage projects based on the current power market structure,” Xu said.

His view is shared by Shen Qiang, vice president of GCL Energy Technology Co., which provides energy storage services. While the technology faces some near-term challenges, he said the industry remains bullish about its prospects and is accelerating expansion.

“Companies are putting in a lot of effort to test it out,” Shen said.

— With assistance by Jasmine Ng, and Feifei Shen