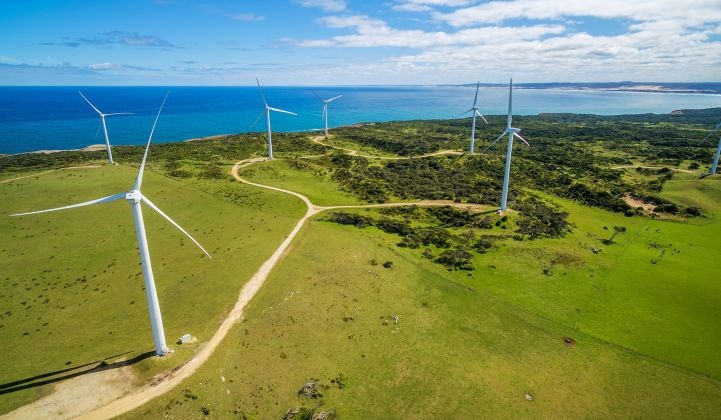 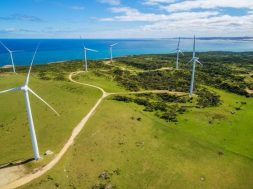 Co-located solar and wind at a massive scale could fuel a potential ammonia export business.

BP and its solar joint venture Lightsource BP are exploring a potential green hydrogen plant in Australia powered by 1.5 gigawatts of wind and solar.

The oil major announced on Friday that a feasibility study was underway for a huge green hydrogen operation. The green hydrogen would be converted into “green ammonia” and exported internationally.

BP says it will invest AUD $2.7 million (USD $1.75 million) into the study, with the Australian Renewable Energy Agency chipping in another AUD $1.7 million.

Ammonia is cheaper to store than hydrogen, and given its widespread use in fertilizers, it already has a large supply chain in place.

“We believe that green hydrogen will play an increasingly important role, not only as a new…clean energy vector but also in enabling the further growth of renewable power,” Dev Sanyal, executive VP of BP’s gas and low-carbon energy business, said in a statement. “This aligns with BP’s ambition to support the world’s decarbonization agenda.”

In February BP announced a target of net-zero by 2050 and said it would release more details in September. CEO Bernard Looney has repeatedly stressed the company’s intention to stick to that agenda in the face of a price collapse and the coronavirus pandemic’s impact on demand for energy.

Australia was chosen as the home for the trial by accident. In addition to its excellent solar irradiation resources, Western Australia also has good wind speeds.

In an interview earlier this year, Chris Buckland, technical director at Lightsource BP, told GTM that having both wind and solar creates an interesting opportunity for green hydrogen/ammonia. While solar offers a predictable resource during the day, capacity factors are still only around 22 percent.

“Co-location of solar and wind would enable a capacity factor of over 70 percent. The remaining 30 percent could either be self-generated [from other sources] or use low-carbon electricity from the grid,” he said.

Co-location has never gained much traction, although some developers in mature renewables markets are taking another look at the economics.

Green hydrogen clusters are beginning to bubble up around North Sea ports, with activity in the Netherlands, Germany and the U.K. Power can be drawn from offshore wind, which has a capacity factor in excess of 50 percent. By comparison, solar capacity factors in that part of the world are just shy of 15 percent. Shell and Ørsted both included green hydrogen in their bids for the latest Dutch offshore wind tender.

At the scale being talked about in Australia, Buckland expects the generation to be connected directly to the offtaker, alongside a grid connection to fill in any remaining gaps in generation from the wind and solar.

The plan is not without its problems, however. Buckland points out the ongoing challenge around electrolyzers. Manufacturing capacity remains relatively nascent.

“Our impression, currently, is that we are more than 10 years away from super-scaling green hydrogen. In the next three to five years, we’ll pilot to scale, so it is more likely to be 2040 when it becomes dependable. We need lower costs of electrolysis equipment. Currently, they’re in the single-megawatt scale,” he said.

Siemens has been running a green ammonia trial in the U.K. (wind-powered) since 2018. ABB is looking at the potential of creating green ammonia at sea for passing ships to use as fuel.

BP’s plan is not the first looking to export Australia’s vast renewable energy resources overseas. The Sun Cable project, still in the early stages of development, is looking to build 10 gigawatts of solar and export some of it to Singapore, some 4,000 kilometers away.