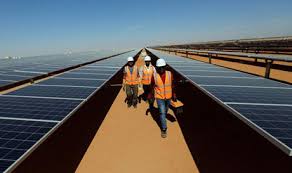 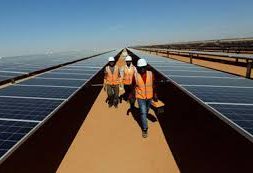 Egypt has huge potential to multiply the energy produced from renewable sources, with steps towards reaching this goal already well underway, Minister of Electricity and Renewable Energy Mohamed Shaker told members of the American Chamber of Commerce in Egypt in a virtual conference this week.

Over recent years, Egypt has been expanding the production of electricity from renewable sources and has allocated large areas for both wind and solar energy projects, Shaker said, adding that it was well on the way to eliminating coal-fired power stations.

To maximise the use of renewables the ministry has drafted an Integrated Sustainable Energy Strategy 2035, which targets supplying 20 per cent of the country’s energy from renewable sources at peak load by 2022. This is scheduled to rise to 42 per cent by 2035. Egypt’s peak load is around 30,000 Megawatts (MW).

The minister highlighted the Benban Solar Park in Aswan, which won the World Bank’s prize for the best project financed in 2019, saying that of the 1,465 MW planned capacity, 1,375 MW has already been installed.

With regard to the future, Shaker said that hydrogen could be a new source of green and sustainable energy generation, and Egypt was studying its possibilities.

However, the country was also making the most of its current energy production, he said, and it was aiming to export Egyptian electrical energy through connections with neighbouring countries.

This would make Egypt a regional energy hub, he said, due to its excellent location between continents and its ability to exploit existing connections with neighbouring countries such as Jordan, Sudan and Libya.

Work was underway on connections with Saudi Arabia and Cyprus, he said.

Egypt’s ability to export its surplus electricity had been made possible thanks to efforts made over the past five years, the minister pointed out. During that time, more than 28,000 MW in capacity has been added, while in 2015 capacity did not exceed 23,000 MW.

Since June 2015, Shaker said, the country had not suffered any load shedding, which takes place when electricity companies reduce energy consumption by shutting down electricity in some areas when the system is at risk.

This had been a problem before the recent upgrades, and one of the milestones in these had been boosting Egypt’s power-generation capacity by over 40 per cent by connecting 14.4 Gigawatts (GW) to the country’s national grid through three state-of-the-art power generation plans constructed by the German company Siemens.

Egypt now had all the energy it needed, the minister said, adding that this meant it could become an exporter of energy.

Another key improvement to the energy supply had been the upgrading of the transmission system, necessary if the power generated was to get to where it was needed. The system, which had measured around 2,300km of power lines, would reach 6,000km of lines by the end of this year, the minister said.

Shaker said that LE24 billion had been spent over three years on the first phase of upgrading the energy distribution network, a large increase in funding from the LE13.4 billion spent on it in the 13 years prior to the project.