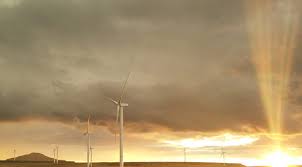 Minister of Electricity and Renewable Energy Mohamed Shaker announced that work is now underway to construct a new wind power complex with a capacity of 2,000 megawatts in the Red Sea governorate – of which 500 megawatts will be generated by the German company Siemens.

In a Sunday statement Shaker added that this step would raise the available generational capacity of renewable energies to 10,000 megawatts, as part of the state’s National Renewable Energy Strategy.

The National Renewable Energy Strategy aims to produce 20 percent of total energies from renewable sources by 2022, with the possibility of it doubled by 2035, he said.

Shaker explained that the situation of renewable energy projects in Egypt has improved significantly.

The energy produced from solar cells connected to the power grid amounted to about 3,655 gigawatt/hour, in addition to about 15 gigawatt/hour generated from biofuel projects.

The private sector also plays an important role in fulfilling the National Renewable Energy Strategy. The minister referred to the commercial operation of the 1465 MW capacity Benban Solar Energy Complex in Aswan Governorate which was completed by the end of 2019.

Other examples he named including a 250 MW wind farm plant in the Gulf of Suez area, the first wind farm tendered on a Build-Own-Operate (BOO) scheme and a 26 MW photovoltaic plant in Kom Ombo, Aswan governorate.

There are other projects in various stages of development with a total capacity of about 2,200 megawatts of wind energy and 520 megawatts of solar energy, he added.