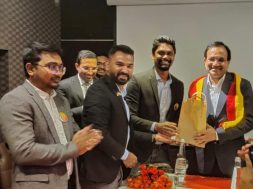 This is the ninth substantial update to CdTe record efficiency since 2011, firmly establishing a sustained trend of rapid performance improvements that significantly outstrips all other commercial technologies.“We are tracking very closely to a technology roadmap we presented in 2013 and revised upward in March 2014“, said Raffi Garabedian, First Solar’s Chief Technology Officer. “At that time, we said we’d hit a 22 percent research cell efficiency milestone by the end of 2015. We’ve delivered on that promise. The accomplishment validates our continued confidence in CdTe as a superior PV material that combines cost effectiveness, reliability and high performance. In recent years and based on our research cell progress, we’ve improved the efficiency and energy density of our mass produced commercial PV modules at a rate at least three times faster than our multi-crystalline Si competitors. We fully expect to further separate ourselves from the pack in coming years.”

Garabedian noted that First Solar’s lead manufacturing lines were producing PV modules with 16.9 percent conversion efficiency in 4Q 2015, and that the research cell efficiency accomplishment serves as a powerful driver for integrating performance improvement into the real-world manufacturing environment.