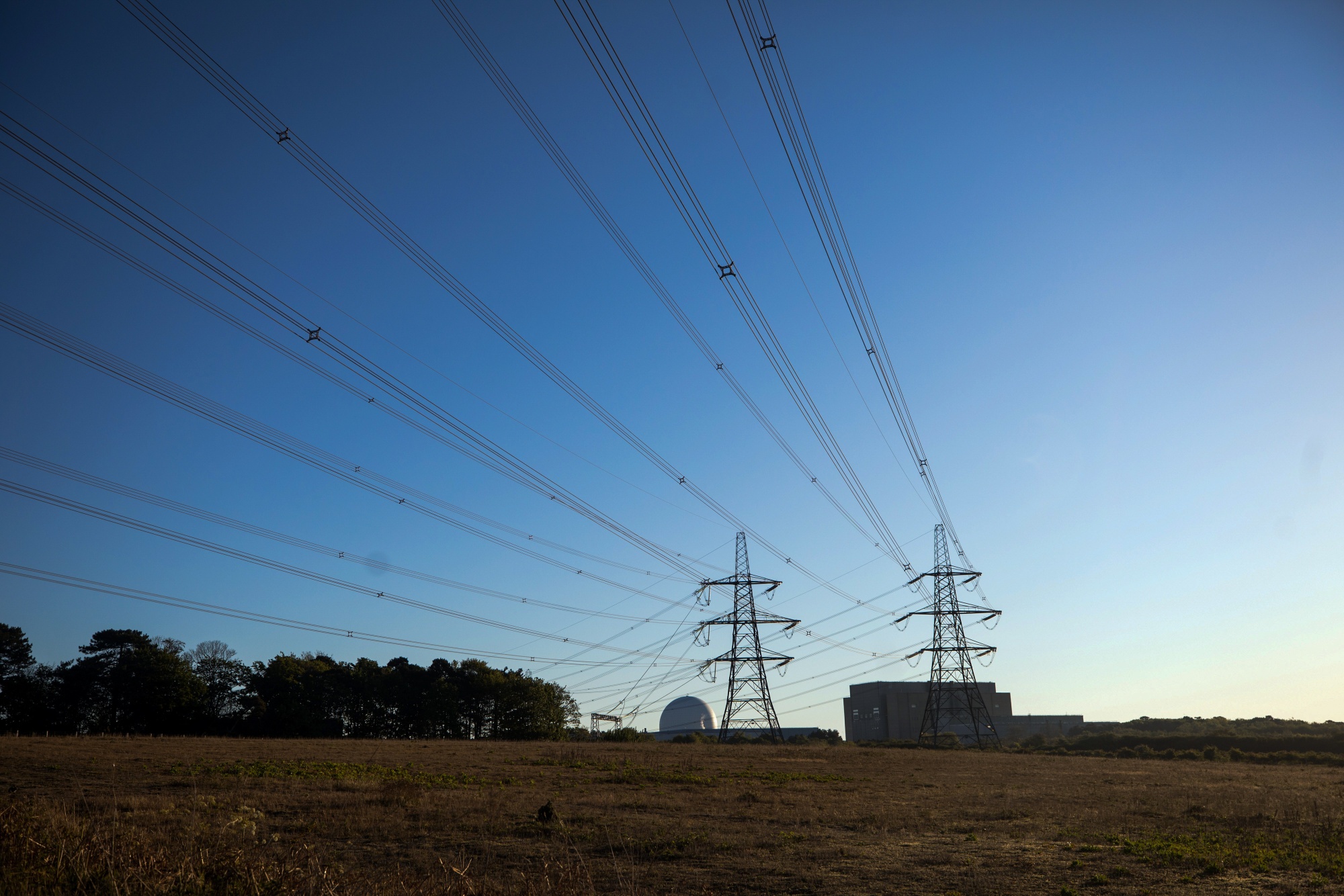 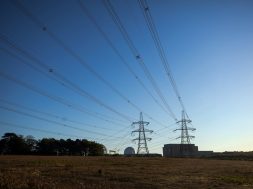 The $28 billion Sizewell C nuclear station is touted as an anchor for Britain reaching net-zero emissions, yet its reactors will compete with wind farms over the North Sea horizon. On gusty days, where will the plant’s excess power go? Toward making hydrogen.

Nuclear developers in Europe, North America and Russia are looking at the clean gas as an outlet for their low-carbon power to maximize revenue from one of the most expensive energy assets on the planet. They also want to capitalize on the $70 billion-plus pledged by governments to help develop the industry as a way to reach climate goals.

Electricite de France SA wants to make hydrogen at the proposed 20 billion-pound Sizewell C plant on the southeast coast, marking the first time these technologies would be combined on a commercial scale in Europe. With enough supply, clean hydrogen could meet a quarter of the world’s energy needs by 2050, and annual sales have potential to reach 630 billion euros ($744 billion).

“The amount of clean hydrogen that we’re going to need to really decarbonize our economic sectors is just immense,” said Elina Teplinsky, a Washington-based partner at Pillsbury Winthrop Shaw Pittman LLP who focuses on nuclear projects and deals. “We need all of the hydrogen production sources that are available — we’re going to need nuclear.”

Electricity grids want more renewable-power sources as nations commit to reducing greenhouse gas emissions to the point where their economies are carbon-neutral. Operators are preparing to run networks on 100% renewables at some times of the day, meaning nuclear, natural gas and coal sources won’t be needed. And that means less revenue for those plant owners.

On the days when wind, solar and hydropower produce enough, the low-carbon electricity generated by Sizewell C would be diverted to an electrolyzer producing clean hydrogen. The waste heat produced by the atomic plant also can be used to make the process 10% more efficient, according to EDF. If the company secures planning permission and the necessary financing, the facility likely will come in the early 2030s.

“It’s not nuclear versus wind versus solar – we need to use everything and cooperate to make the most of the technologies,” Julia Pyke, Sizewell C’s financing director, said in an interview. “Ideally, you’d have the electrolyzer supplied both by nuclear and by wind.”

The U.K.’s long-awaited hydrogen strategy is expected to be technology neutral, leaving the door open for reactors. That blueprint could be released in coming days.

EDF’s plans were imperiled amid reports Britain wants to oust China’s state-owned nuclear energy company from all future power projects. The Chinese have a 20% stake in Sizewell C, but the U.K. government says the project will move forward with alternative financing.

Hydrogen produced using nuclear fuel is dubbed “pink hydrogen” within the industry. The U.K. grid operator, National Grid Plc, modeled production of the fuel in its long-term report this year for the first time. As much as 28 terawatt-hours of electricity from reactors could be siphoned off to make the clean gas by 2050 – the equivalent of about 14% of the nation’s production. 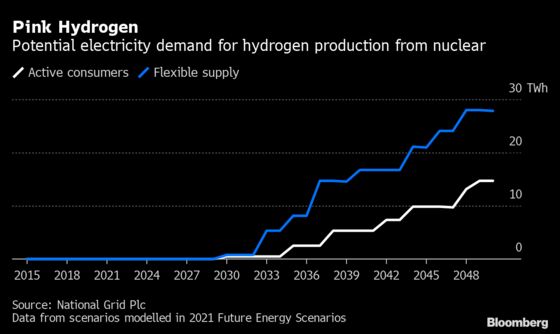 Trial runs to pair these technologies also are being held in North America. The U.S. Department of Energy has awarded $26.2 million to two projects run by Xcel Energy Inc. and FuelCell Energy Inc. to help nuclear plants switch between electricity generation and hydrogen production when necessary.

Bloom Energy and the Idaho National Laboratory are testing an electrolyzer run on nuclear-generated electricity.

“This expands the markets for nuclear power plants,” said Tyler Westover, project lead at the laboratory.

Canada gets almost 15% of its electricity from nuclear stations and is looking to expand production using small modular reactors. In its hydrogen strategy published in December, the government outlined a role for nuclear electricity to produce hydrogen at off-peak times. Bruce Power LP is studying the economics and opportunities for the two technologies.

Achieving net-zero emissions by 2050 could require as much as $173 trillion in investments globally, according to BloombergNEF. By then, Britain’s energy market will have transformed: renewable capacity is expected to triple while electricity demand doubles. The U.K.’s Nuclear Industry Association estimates that a third of the nation’s hydrogen could come from atomic energy.

But there are questions about the economics of this marriage and whether it’s the most efficient use of investor money. Hydrogen and nuclear are capital-intensive industries by themselves, and combining the two will only increase project costs, said Rob Gross, professor at Imperial College London and director of researcher UKERC.

While the two are highly combustible, the nuclear fuel is nowhere near the hydrogen being produced.

Germany, the continent’s biggest economy, turned its back on the technology after the 2011 disaster at Japan’s Fukushima plant, a stand that’s made cutting emissions more difficult. Belgium and Spain also plan to exit atomic energy.

With ample supply, Russia could be the first to deliver nuclear-produced hydrogen.

EDF signed a cooperation agreement in April with Rosatom Corp., which operates 38 nuclear units at 11 sites. Rosatom says developing hydrogen production is a priority, and it plans to export the fuel to Europe. The same type of smaller reactor — purpose-built to produce hydrogen — is being considered by both the U.K. government and Rosatom.

The U.K. has set a target for 5 gigawatts of hydrogen production by 2030, envisioning its use in road transportation, home heating and ship propulsion. EDF currently runs 27 plants in the U.K. and France, and is building two more. Sizewell C would be its 30th.

“The nuclear industry does need to broaden its ambition and recognize the value of these opportunities,” said Kirsty Gogan, managing director of consultant Lucid Catalyst in London and member of a government nuclear advisory board. “We have started to see this happening.”