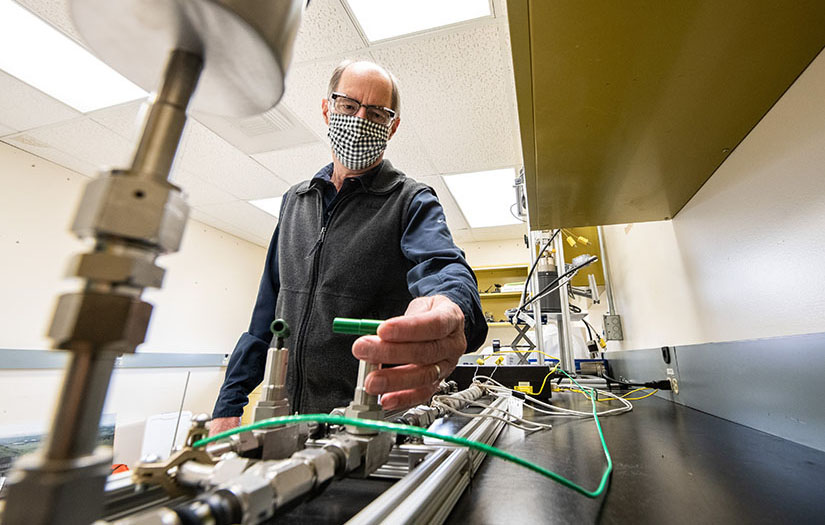 Since the mid-’80s, concentrating solar power (CSP) plants have generated clean energy to power our homes, schools, offices, and communities. Yet, one consistent challenge of CSP plants is hydrogen buildup, which can be costly to mitigate and reduces plant efficiency. NREL Senior Scientist Greg Glatzmaier has spent much of his career finding a solution.

By far, the most common type of CSP plant is based on a parabolic trough design, where heat absorber tubes run along curved concentrating mirrors to absorb the sun’s energy. During operation, the organiac-based fluid that delivers heat from the parabolic trough receivers to the electricity-generating steam turbine undergoes a small but constant thermal breakdown. While miniscule, the resulting hydrogen off-gassing has a severe impact—causing thermal losses that can decrease overall plant efficiency and revenue by 15%. With more than 80 CSP parabolic trough plants operating worldwide, that adds up to an estimated 750 megawatts of lost generation capacity and about $250 million dollars in lost revenue annually.

Developing an effective solution to that intractable problem required all of Glatzmaier’s sleuthing skills: keen observation, practical knowledge of CSP plant operations, and computational modeling expertise. For years, several promising solutions either failed in testing or provided only a five- to seven-year fix, which is insufficient for CSP plants with a useful lifespan of at least 30 years. Replacing individual receivers once their efficiency has degraded was an option that proved too expensive. Hydrogen was the invisible culprit in this problem, and it was hiding in plain sight.

So Glatzmaier, with support and funding from the Department of Energy’s Solar Energy Technology Office, partnered with Acciona Solar Power to develop a systemic mitigation process that permanently controls hydrogen in receivers to extend or restore original power-plant efficiency and revenue.

“It’s always been a priority for me to create something of practical use and value for the technology and the industry,” Glatzmaier said.

Sleuthing Skills Point the Way to a Solution

While searching for a solution, Glatzmaier, along with other researchers, drove up and down the collector rows at CSP power plants in the Mojave Desert, taking infrared images of the receivers to monitor the temperature of glass sleeves that enclose the tubes that transport heated fluid. Receivers were designed to operate with a glass surface temperature of 140°F. The infrared images, however, measured some receivers with glass surface temperatures of 284°F to 320°F. Somehow the insulating value of the glass sleeves had been compromised, and heat loss was occurring.

Researchers understood that heat-transfer fluids can off-gas hydrogen, hydrogen can leak through steel tubes, and hydrogen is a good conductor of heat. All three conditions were present in the receiver, and the unexpectedly high glass surface temperatures provided the first clue. Researchers identified the cause of the heat loss, but identifying the hydrogen buildup problem proved to be much simpler than devising a solution to remove it.

Nuts and Bolts of Designing the Prototype

With support from the Department of Energy’s Solar Energy Technologies Office and CSP plant developer Acciona Solar Power, Glatzmaier developed his step-by-step solution during their five-year collaboration. He first built a computational model to determine the hydrogen extraction rate necessary to maintain acceptable concentrations of hydrogen in the circulating heat-transfer fluid. Next, he developed a hydrogen sensor that could make gas-concentration measurements every one to two minutes. Precisely measuring the amount of hydrogen in near real-time was essential, but existing sensors required that samples be sent to a lab for analysis.

The third task was to develop a simple means of extracting hydrogen from the headspace gas in the expansion tanks. A palladium membrane was used to separate out the hydrogen, which was then extracted via vacuum pumps into a catalytic oxidizer to be discharged as water vapor. The final task was to combine hydrogen sensing and extraction and integrate them into a physical prototype that could be used as a model for a CSP-plant-sized module. The prototype was constructed, and laboratory evaluations at NREL demonstrated its ability to successfully solve the hydrogen buildup problem—clearing the way for building and testing an on-site module.

A full-scale integrated hydrogen sensor/separator module was designed and implemented at Acciona’s Nevada Solar One CSP plant. Ongoing evaluations indicate that it is successfully operating as designed. But the module goes well beyond preventing future efficiency loss in new receivers—it gradually cleans existing contaminated receivers by pulling the hydrogen back out of the glass sleeves and restores them to their original operating efficiency.

At Nevada Solar One, the $500,000 investment was paid back in just two months. When compared to the nearly $20 million cost of replacing the degraded solar receivers over the field’s lifetime, the integrated hydrogen sensor/separator module is not just a bargain—it is a game changer. As a bonus, the installation can be performed without any costly interruptions to the plant’s generating capacity, increasing the technology’s attractiveness to cost-conscious plant operators.

The integrated hydrogen sensor/separator module is an excellent example of technology transfer from NREL to industry. As Glatzmaier notes, “For me, it’s always been a goal to be able to point and say that something I developed is operating now, and there are clear efficiency and economic benefits to this technology.”