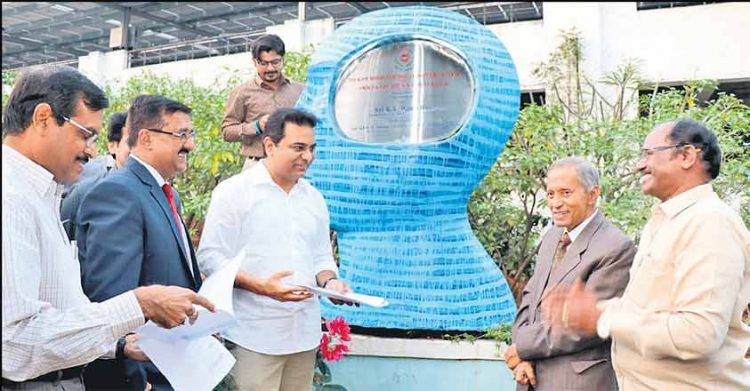 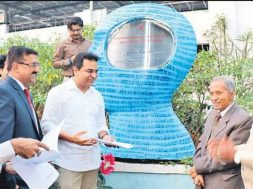 Hyderabad: IT and Industries Minister KT Rama Rao inaugurated the second phase of the Rooftop Solar Power System of 350 KWp capacity on the campus of Dr MCR HRD Institute of Telangana, making it the top most solar power generating government institution in the State. APVN Sarma, Advisor to Governor, BP Acharya, Director General of the Institute, and others were present.

According to a statement here on Friday, the Phase-I of the Rooftop Solar Power System of 500 KWp capacity was commissioned in 2018. With a total capacity of 850 KWp of the power system commissioned in two phases, Dr MCR HRD Institute has emerged as the highest solar power generating public building.

The electricity generated from Phase-I and Phase-II has resulted in a saving of a whopping Rs 9 lakh per month in the Institute’s electricity bill. The total cost of the Phase-I and Phase-II of the project was Rs 3.81 crore, of which approximately Rs 0.95 crore, that is, 25 per cent of the project cost, will be reimbursed by the Union Ministry of New and Renewable Energy.

The Institute has plans to commission another Rooftop Solar Power System of a capacity of 150 KWp thereby increasing the total capacity of solar power system to 1,000 KWp (1 MWp). “Unlike the conventional ways of generating electricity which pollute environment, the solar power is clean, non-polluting, and sustainable and contributes to a greener environment,” Acharya said.

The Rooftop Solar Power Systems were executed through Telangana New and Renewable Energy Development Corporation Limited, the nodal agency for implementation of new and renewable energy programmes in the State.