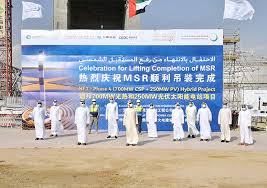 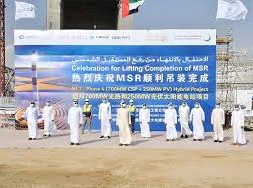 HH Sheikh Mohammed bin Rashid Al Maktoum, Vice President and Prime Minister of the UAE and Ruler of Dubai, has inaugurated Dubai Electricity and Water Authority’s (DEWA’s) Innovation Centre and the 800MW third phase of the Mohammed bin Rashid Al Maktoum Solar Park, the largest single-site solar park in the world. With a planned total capacity of 5,000MW by 2030, the Park features an investment of AED50 billion.

His Highness also visited the site of the 950MW fourth phase of the solar park, the world’s largest Concentrated

HH Sheikh Mohammed bin Rashid Al Maktoum was briefed by HE Al Tayer about the Innovation Centre, a global hub for renewable and clean energy innovation that is expected to contribute to shaping the global future of sustainable energy. The Centre houses an auditorium for events, conferences, and training programmes on solar power, renewable energy, and other green initiatives. The four-storey building covers 4,355 square metres and is 88 metres high. His Highness toured the Innovation Centre’s exhibitions, which focus on solar power and its various technologies.

Through the Innovation Centre, DEWA aims to support innovation and creativity in clean and renewable energy, promote sustainability, develop Emirati talent and enhance the country’s competitive advantage in this sector. The Innovation Centre’s research on solar power will support the Dubai Clean Energy Strategy 2050, which aims to diversify the energy mix and provide 75% of Dubai’s total power capacity from clean energy sources by 2050.

During the visit, HH Sheikh Mohammed bin Rashid Al Maktoum inaugurated the 800MW third phase of the Mohammed bin Rashid Al Maktoum Solar Park. DEWA built the third phase using the IPP model in partnership with a consortium led by Abu Dhabi Future Energy Company (Masdar) and EDF Group, through its subsidiary EDF Énergies Nouvelles at an investment of AED3.47 billion. The third phase provides clean energy for over 240,000 residences in Dubai. The facility is the first of its kind in the Middle East and North Africa region to use single axis solar tracking to increase energy generation. It also uses other innovative technologies including cleaning robots for photovoltaic panels to increase the plant’s efficiency.

HH Sheikh Mohammed bin Rashid Al Maktoum was briefed by Al Tayer on the Solar Park’s phases and technologies. The total capacity of operational projects at the Solar Park, which use photovoltaic solar panels, is 1,013MW. DEWA is creating an additional capacity of 1,850MW using solar panels and Concentrated Solar Power (CSP), in addition to future phases to reach 5,000MW by 2030. Al Tayer explained that with the inauguration of the third phase, the share of clean energy in Dubai’s total power output has increased to 9%. This exceeds the target of Dubai Clean Energy Strategy 2050 to provide 7% of power from clean energy by 2020.

HH Sheikh Mohammed bin Rashid Al Maktoum concluded his tour by visiting the fourth phase of the Mohammed bin Rashid Al Maktoum Solar Park. Combining CSP and photovoltaic technology based on the IPP model, the fourth phase is the largest single-site CSP project in the world. The 950MW project, featuring an investment of AED15.78 billion, has the world’s tallest solar power tower measuring 262.44 metres in height.

“Inspired by the vision of the UAE leadership, the inauguration of the third phase of the Mohammed bin Rashid Al Maktoum Solar Park marks a significant milestone in the journey towards achieving the UAE’s target of having 50 per cent of its power coming from clean energy by 2050,” said HE Dr. Sultan Ahmed Al Jaber, Minister of Industry and Advanced Technology and Chairman of Abu Dhabi Future Energy Company (Masdar).

“As the UAE prepares for ‘The Next 50 Years’, the Mohammed bin Rashid Al Maktoum Solar Park will further strengthen the country’s position as a global leader in cost competitive renewable energy. This project is a prime example of how Masdar and Dubai Electricity and Water Authority are utilising the latest advances in clean energy technology to drive cost efficiencies and maximise return on investment.

“I would like to congratulate all the teams involved in Shua’a Energy 2 for the delivery of this pioneering, strategic project for the UAE. As we look forward to the next 50 years, our dream of a sustainable future for all generations is becoming a reality,” Al Jaber added.

“We promise our leadership that we will continue implementing more clean and renewable energy projects, guided by the vision of His Highness Sheikh Mohammed bin Rashid Al Maktoum. We also pledge to ensure the UAE will consolidate its global leadership in this sector in line with the strategic theme of this year,

‘2020: Towards the Next 50’, to further the country’s progress, growth and prosperity in all sectors,” concluded Al Tayer.

“It is a great honour for EDF Group to be part of one of the world’s largest solar projects. For the EDF Renewables team, the 800MW third phase of the Mohammed bin Rashid Al Maktoum Solar Park represents a fantastic accomplishment, alongside our long-term partner Masdar. It clearly demonstrates our strong solar expertise and global experience in renewables. It also perfectly fits into the EDF Group’s ambitions to contribute to the UAE’s efforts to mitigate climate change using low-carbon energies”, said Bruno Bensasson, Chairman and Chief Executive Officer of EDF Renewables & EDF Group Senior Executive Vice President, Renewable Energies.

The Innovation Centre is the first and largest government centre to receive the ‘Done by Youth’ seal from the Federal Youth Authority. Developed by a team of young Emiratis, the Centre supports the next generation of innovators in clean energy technologies while focusing on developing national capabilities. The Innovation Centre will be an educational platform that hosts events, conferences, seminars, and workshops. It will build strong collaboration with schools, universities, start-ups, and local and international organisations for research, knowledge-exchange, and organisation of exhibitions.

The Innovation Centre offers an opportunity for visitors to explore the latest innovations in clean energy technologies. The exhibition area on the first floor of the Centre focuses on DEWA’s history, key inventions and innovations in electricity, and the latest developments in renewable and sustainable energy. The area also includes over 30 interactive exhibits designed to introduce visitors to renewable energy developments. The area also houses the DEWA Museum, water desalination plants, and a visual area that explains the properties of light and solar radiation. The Centre also features an exhibition on photovoltaic solar power and the key components of solar photovoltaic cells, solar photovoltaic technologies, CSP and the Solar Power Tower. It also showcases DEWA’s renewable energy journey, Smart DEWA, solar cell applications in spacecrafts and satellites, a model that explains the working mechanisms of electric vehicles, a wind turbine, and the development of DEWA’s sustainable buildings.

The Innovation Centre received a platinum rating from LEED (Leadership in Energy and Environmental Design) with 101 points out of a possible 110 in the first quarter of 2020. This is the highest score in the world for a new government building. The Centre received this recognition by achieving high scores in water efficiency, internal environment quality, energy efficiency, innovation, and design. The Centre also collects rainwater and treats it on site.

The inauguration of the 800MW 3rd phase of the Mohammed bin Rashid Al Maktoum Solar Park supports the directives of HH Sheikh Mohammed bin Rashid Al Maktoum to provide 75% of Dubai’s total power capacity from clean energy and attract environmentally friendly investments through the Dubai Clean Energy Strategy 2050. To achieve this goal, Dubai has developed an integrated system to train UAE Nationals and recruit the most skilled and experienced people from around the world. DEWA now has a team of young Emiratis with specialised expertise in clean energy and shaping the future.

The fourth phase of the Mohammed bin Rashid Al Maktoum Solar Park uses three hybrid technologies to produce clean energy: 600MW from a parabolic basin complex (three units of 200MW each), 100MW from a solar power tower (based on Molten Salt technology), and 250MW from photovoltaic solar panels. The Molten Salt Receiver (MSR) on top of the solar power tower is the core and the most important part of the CSP plant. It receives solar radiation and turns it into thermal energy. The MSR contains over 1,000 thin tubes that enable the absorption of sunrays and their transfer to the molten salt within these tubes. On its completion, the project will have the world’s largest global thermal storage capacity of 15 hours, facilitating energy availability round the clock. The fourth phase will provide clean energy for 320,000 residences and will reduce 1.6 million tonnes of carbon emissions per year.

The project, which covers a total area of 44 square kilometres, has broken many world records, including the lowest Levelised Cost of Electricity (LCOE) of USD 7.3 cents per kilowatt-hour (kW/h) for the 700MW CSP and USD 2.4 cents per kW/h for the 250MW photovoltaic solar panels. A consortium led by DEWA and Acwa Power has formed a project company, Noor Energy 1, to design, build, and operate the plant. DEWA owns 51% of the company while Acwa Power owns 25% and the Silk Road Fund 24%. The fourth phase will be operational in stages starting from Q3 2021.