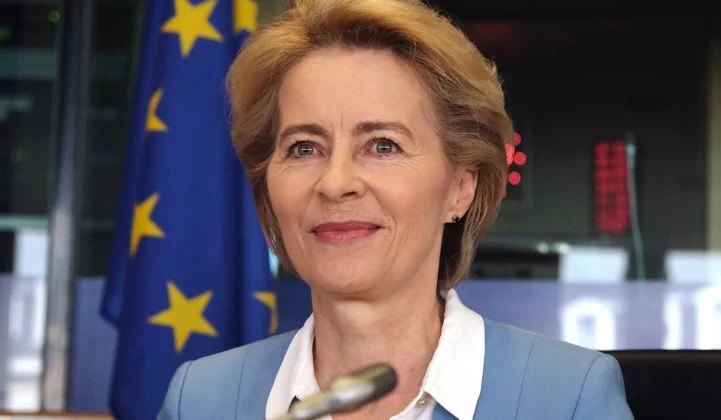 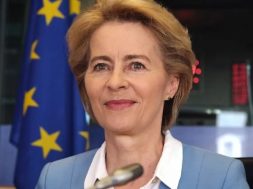 Among the European Commission’s plans is a carbon border, ensuring companies cannot evade carbon taxes by outsourcing their emissions.

The package of measures would see climate action woven across all the EU’s policy areas, and is as much of an economic policy as it is a climate or energy proposal.

The Green Deal is the first political act from the new European Commission, which was confirmed last month and serves as the European Union’s executive branch. Having had just 10 days to work on the package, it remains in skeletal form, but crucially the commission has set a timeline for detailing the many complex and overlapping policies.

Within 100 days, the commission will present a new climate law designed to lock in the continent’s commitment to net-zero emissions by 2050. The current target for 2030 is a 40 percent emissions reduction, up from an original 27 percent.

“Today is the start of the journey,” said von der Leyen. “This is Europe’s ‘man on the moon moment.’ The European Green Deal is very ambitious but it will also be very careful about assessing the impact of every step we are taking.”

Among its many provisions, the Green Deal will include:
The EU will develop a carbon border, which will amount to a levy designed to ensure firms outsourcing emissions to production centers in China and elsewhere can’t evade carbon taxes. The plan will be compliant with World Trade Organization rules, according to von der Leyen.
Effective carbon pricing and climate-compatible taxes are also in the works. Interestingly, the commission warned that it could look to change the voting rules on energy taxation so that changes can be pushed through by member states via a majority rather than requiring unanimity. That could spark opposition from nations such as Poland and the Czech Republic that still rely heavily on coal.
As it stands, the EU’s Emissions Trading Scheme, a cap-and-trade-style system, only covers 45 percent of the continent’s emissions. While it encompasses commercial aviation, heavy industry and the power sector, emissions from passenger transport, agriculture and waste are excluded. The Green Deal will look to bolster the program and potentially include more sectors.
The price per ton of CO2 has been less than €10 ($11.1) for most of this decade, but it has traded above €20 for most of the past year, sending a more effective price signal.
Von der Leyen confirmed a timeline for the increase in the continent’s 2030 emissions reduction targets. This will be raised to “at least” 50 percent emissions reduction by 2030, with a plan to step up to 55 percent. These fully reviewed proposals will be developed and presented next summer. Von der Leyen said they would be as “ambitious and realistic” as possible.
“The [Green Deal] covers all sectors of the economy, with details on what this new strategy means for each of them yet to be ironed out,” said Valentina Kretzschmar, director of corporate research at Wood Mackenzie. “The impact on the oil and gas industry will be significant,” Kretzschmar said, noting that the border tax could impact imports into Europe.
Speaking to journalists at the Euroapean Parliament in Strasbourg on Wednesday, von der Leyen, formerly Germany’s defense minister, stressed that the Green Deal was far more than an environmental policy.

“Our goal is to reconcile our economy with our planet and to make it work for our people,” she said. “On one hand, it’s about cutting emissions; on the other, it’s about creating jobs and boosting innovation.”

“I’m convinced the old growth model based on fossil fuels and pollution is out of date and out of touch with our planet. The European Green Deal is our new growth strategy,” she said.