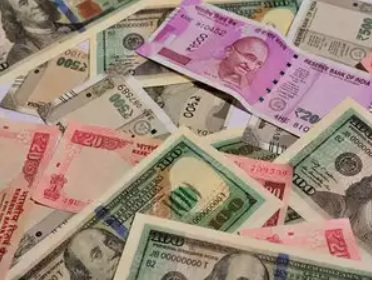 No indemnity, warranties for IL&FS assets 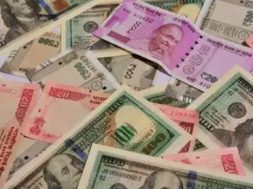 No indemnity, warranties for IL&FS assets

MUMBAI: Infrastructure Leasing & Financial Services, which is selling assets to repay debt of about Rs 91,000 crore ($13 billion), won’t provide indemnity and warranties to potential buyers, a move that will drive down valuations steeply, said three people with direct knowledge of the matter.

The IL&FS board, which the government reconstituted in October after defaults by the company, said any liability arising in future from the assets will have to be borne by the buyer. This has led several potential buyers to negotiate for a lower price, the people said.

“IL&FS is a bankrupt company… What is the value of the guarantee, even if one is extended to the potential buyer?” one person asked. “Potential buyers already know this and every sale will have to go through the National Company Law Tribunal (NCLT).”

Cash-strapped IL&FS had approached NCLT in September to seek relief from being dragged into insolvency proceedings by lenders. 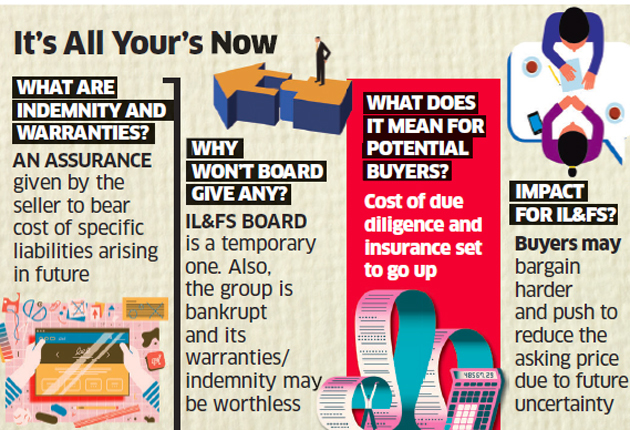 According to another person, the decision not to extend warranties or indemnity to potential buyers was a deliberate one. “The company is managed by the governmentappointed board… This board is only there for a period and cannot be held accountable for future liabilities,” the person said.

An IL&F spokesperson declined to comment on the matter.

The company said more than 30 bidders have expressed interest for its road assets worth over Rs 25,000 crore and 15 applicants — including Tata Power and JSW Energy — were interested in Rs 2,000-crore of renewable energy projects.

In most merger and acquisition deals, the seller indemnifies and extends warranties to the buyer – what is known in industry parlance as representations and warranties – for future liabilities arising for the period prior to the deal. The seller promises to pay future liabilities, including tax and other payments, for the period that the assets were under its control.

“Lack of indemnities and warranties can steeply drive down value of assets on the block,” said the third person with knowledge of the matter. “There are many buyers for the assets, but at a lower price.”

Experts said several buyers are worried they won’t be able to get insurance cover for any future liabilities of IL&FS assets. Insurers will likely charge a heavy premium for taking on the risk of indemnity for such assets.

“The whole process is being monitored by the government and the warranties and indemnity were discussed in several internal meetings,” said the second person.

While the government, through the revenue department, can technically take a lenient view on any future liabilities, it’s not clear under which laws this can be done, the person said. “In some cases, the government can throw in some goodies here and there by tweaking the contract, which may affect cash flows of the potential buyer,” the person said, adding that this was discussed in meetings, but can be done only on a case-to-case basis with NCLT approval.

The IL&FS board led by veteran banker Uday Kotak has appointed Arpwood Capital and JM Finance to sell the assets.