The rising demand for lithium-ion batteries far outstrips the available supply, even as investments into materials extraction and manufacturing ramp up like never before. But what does the situation really look like and when will it ease up? Andy Colthorpe investigates.

It’s no secret there’s a tightness constricting the energy storage supply chain. A few weeks ago, on EnergyStorage.news, we heard from a specialist on procurement, lawyer Adam Walters at Stoel Rives, that lithium carbonate price rises in particular are at “crisis point”.

Rising demand for batteries, largely coming from the electric vehicle (EV) sector, means raw materials prices continue to be volatile. Cell supplier contracts are moving to shorter and shorter term pricing. With terms changing over periods as short as a week, it becomes more difficult to get them signed off.

Fluence noted in its Q1 2022 financial results that while the company’s US$1.6 billion backlog of energy storage orders has been hedged with fixed price contracts, future contracting will be based on raw material indexed pricing to minimise exposure to fluctuations. The system integrator is not alone in this.

The demand situation has been exacerbated by the COVID-19 pandemic, which has thrown logistical headaches into the mix for over two years.

The two-level problem comprises logistical problems arising as a knock-on effect of the pandemic — made worse by China’s lockdowns — alongside the ongoing demand-driven undercurrent of raw material prices soaring.

Factor in that the thirst for economic recovery is leading politicians, particularly in Europe, to place that within a ‘green recovery’ agenda. That’s undoubtedly a positive thing, says Rawles, but puts more strain on already-constrained supply. Russia’s invasion of Ukraine is also bringing energy security issues to the fore, alerting Europe to its dependency on Russian gas, driving higher sales and awareness of battery storage and EVs as well as exerting pressure on nickel prices.

But — and it’s important to note this — many EV manufacturers are also switching to lithium iron phosphate (LFP) chemistries instead of nickel manganese cobalt (NCM) or nickel cobalt aluminium (NCA) to reduce their exposure to cobalt and nickel price rises.

Both Benchmark and CEA have noted about a 500% increase since early 2021 in the cost of battery grade lithium carbonate from China, which translates to prices going up ten-fold in dollar values, from about US$8 per kilogram to more like US$80. 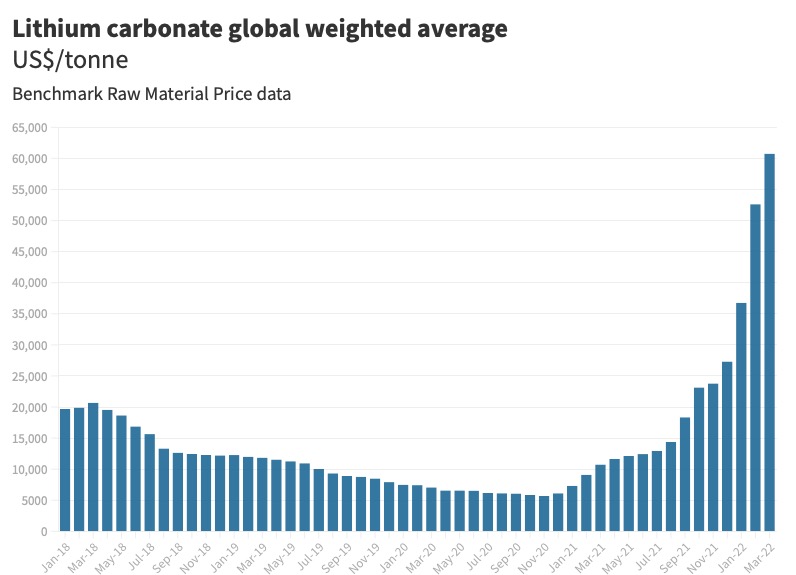 From 2018 to the end of 2020, there were essentially three years of falling prices, which meant hardly anyone was investing in new supply.
“Despite companies like Benchmark saying ‘this is coming, we can see the numbers and we know what’s going to be needed, and we know how long it takes to bring this new supply online,’ there was
a lack of supply chain investment. It was already on the horizon that we were pretty much there with lithium, the market was going to get very tight. Then the pandemic hit. Following the pandemic, it has amplified demand,” Rawles says.

Lindsay Gorrill, CEO of US-based cell and systems manufacturer KORE Power, was previously head of a company selling feedstock for lithium battery electrolyte.
From working in the supply chain for 20 years, Gorrill says he understood that creating upstream and downstream capabilities in the US would be the only way to solve the problems that he too saw coming.

KORE Power has 2GWh of manufacturing in China, which it is expanding to 6GWh in 2023 as well as developing a 12GWh plant in Arizona, US, on which it plans to break ground later this year. Helping solve those long-term supply chain issues was what drove the CEO to found the company in the first place, he says.

“That whole process was in my head even six years ago. I was saying, ‘If we don’t start bringing supply all the way through upstream to downstream to the United States or near the United States, there’ll be a problem,’ because before anybody was even talking about supply chain problems, there was already a shortage in late 2019.”

Supply chain investments are now starting to happen, but the market dynamic is still characterized by what Benchmark Mineral Intelligence has dubbed “the great raw material disconnect” — while new battery factories can be built in timeframes of as short as two years in some cases, new material extraction facilities take much, much longer. As expansion takes place, the market will eventually reach some kind of balance in the latter part of this decade, but the wave of electrification, from transport to heating to the grid and beyond, is on an unprecedented scale. 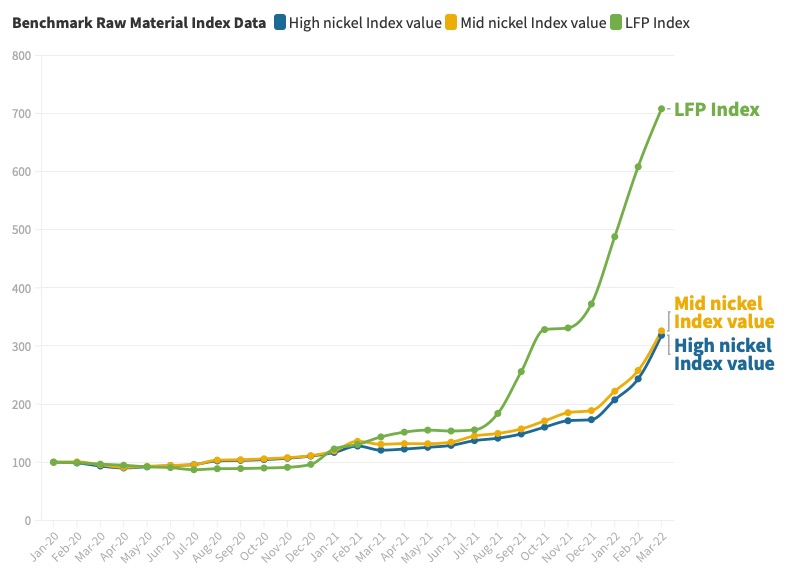 LFP has been the most affected among commonly used battery chemistries. Based on data provided courtesy of Benchmark Mineral Intelligence.

CEA’s Joseph Johnson also refers to a “huge disconnect” even between planned manufacturing capacity additions and projected stationary storage installation figures, somewhere between 2x and 4x
— albeit mining and refining is the “real limiter that determines how many cells can get produced”.

That upstream capacity is starting to come online, but where a battery factory can be built in perhaps two to three years, a new mining operation can take much, much longer, anything from five years at best to decades in extreme cases. With investments having begun at scale from 2019, that points to 2024 being the earliest the supply chain will start to ease. It’ll take at least another couple of years for the material extraction side to really catch up to demand.

CEA believes logistics issues will likely ease over a two-year window, viewing the end of 2023-beginning of 2024 timeframe as when availability of containers, additional vessels and sea lanes to carry freight will improve. Port congestion and backlogs will start to be resolved and worked through.

While demand for ESS, or EVs, hasn’t been hugely negatively impacted by the supply chain situation, it has led to delays for many ESS projects. As pointed out by Stoel Rives’ Adam Walters, we are likely to see many more projects get delayed. However, Rawles says that a number of ESS providers which have moved into a cost pass-through structure in their contracts are finding it a tough financial hit to bear, eroding “all of the margin”.

All our interviewees say the situation will ease and that actions being taken today can make for a more robust industry and value chain tomorrow. But it will take time, it will take investment, it will take hard work. It also represents an opportunity to create a huge industry, a global source of new jobs and of course the very engine of the transition to sustainable energy.