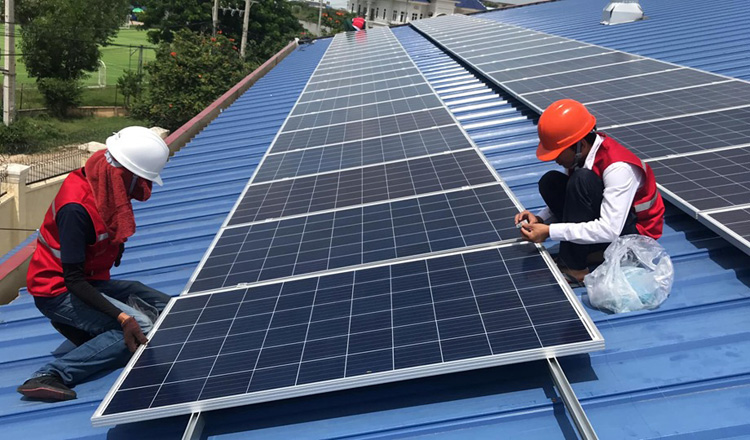 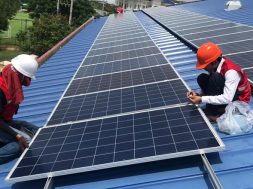 The push comes after a global campaign was launched to promote the economic advantages of solar PV, with organisations such as the UK embassy, saying Cambodia is at a crossroads for the future of its energy infrastructure.

“Already, since 2010, the cost of solar and wind have fallen by 85 percent and 49 percent respectively while the expense of coal has remained static, owing only to subsidies,” she added.

In response to the campaign, Khmer Times spoke with local industry leaders who said that under Cambodia’s current energy tariff system, it can sometimes be more expensive to use solar PV because of increased tariffs.

Raphaël Beton, Project Development Director at Green Yellow said that the laws and policies in Cambodia limit the benefits of solar PV to Cambodian businesses.

“This is because companies in Cambodia that install solar PV on their rooftop have a different tariff structure from the grid than if they don’t install solar PV. In some cases, the generated savings from the solar systems are offset by the extra costs from their grid bill,” he added.

In response, Beton says the regulator could implement several sophisticated schemes but the most simple would be to ensure that consumers with and without solar PV systems purchase the electricity from the grid at the same tariff.

“Without considering sophisticated schemes like feed-in-tariffs or direct purchase power agreements, a very simple and effective change would be to ensure that consumers with and without solar PV systems purchase their electricity from the grid at the same tariff,” he said.

In addition to levelling energy tariffs, the industry is also looking at ways to reduce the high initial investment that is required to install rooftop solar by implementing zero customer investment and operational cost business models.

Gavin Adda, chief executive officer of Total Solar Distributed Generation in Southeast Asia, said the expected payback of original investment for a solar project is eight to 10 years while an actual return on investment is normally 15 to 20 years. So we are implementing a business model where our company offers to construct, finance and operate customers’ complete solar PV systems.

“In our business model, customers pay nothing upfront and instead only pay for the solar power generated. This can be 10 to 20 percent cheaper than the grid. When diesel generators are used for back-up, then we can provide 30 to 40 percent savings versus the grid,” he said.

He said that this business model was already being implemented on Koh Rong Sanloem, providing a solar-plus-battery system that will be able to provide power to the entire island.

“For the Koh Rong Sanloem electrification project, solar is combined with power storage. This is an example of remote locations leveraging renewables to improve access to power and also to cut costs,” Adda said.

“Southeast Asia has tens of thousands of islands, so we see integrating storage with solar as a great growth opportunity,” he added”.