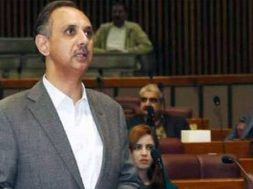 Responding to a call attention notice in the National Assembly, Omar Ayub said that owing to the corrective measures taken by the Pakistan Tehreek-e-Insaf (PTI) led government, the revenue of the Ministry of Power has increased to Rs229bn in one year.

The minister said that Rs112bn were generated through recoveries and taking action against the power pilferage. The minister maintained that 7,000 people involved in the pilferage were arrested.

Umer Ayub said, “We have reduced the flow of circular debt to ten to twelve billion rupees per month from Rs39bn left behind by the PML (N) government.”

The minister said 80 per cent of the total feeders have been cleared of load shedding and added that a significant progress has been made in exploiting the wind, solar and biomass potential available in the country.

Holding past governments responsible for on prevailing gas shortfall in the country, the minister revealed that no gas exploration project was launched in last 10 years.

He said a policy has also been formulated by the present government to increase the share of renewable energy up to the level of twenty percent by 2025 and thirty percent by 2030.