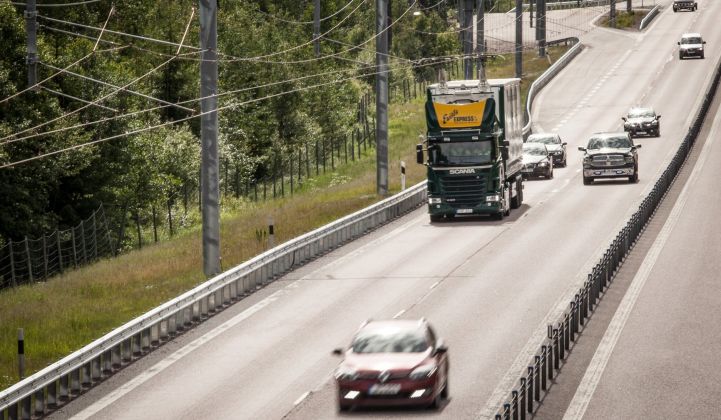 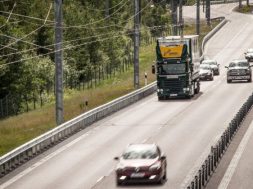 Germany’s first “eHighway” truck route has opened along a stretch of the autobahn. Siemens spoke to GTM about expanding and commercializing the technology for the long haul.

The first test route for electric trucks powered by an overhead line opened on a German highway earlier this month, backed by a group of government agencies and private-sector partners, including Siemens Mobility GmbH.

Using the same catenary technology that powers public transit bus trolley lines or light-rail train cars, hybrid trucks on the route connect to an overhead power line via a roof-mounted pantograph. The overhead line powers the electric motor and charges onboard batteries when the truck is connected to the line. When the truck leaves the overhead line, it can operate on battery power or with its diesel engine.

Trucks will operate on a 10-kilometer (6.2-mile) stretch of the A5 autobahn between Frankfurt and Darmstadt in the German state of Hesse. By mid-2020, five trucks operated by multiple shipping companies will make several trips daily on the test track.

Germany’s Federal Ministry for the Environment, Nature Conservation and Nuclear Safety (BMU) provided €14.6 million ($16.3 million) for construction of the test track, and another €15.3 million ($17 million) to cover field testing through 2022.

Additional test routes are planned for the German states of Schleswig-Holstein and Baden-Württemberg. In total, Germany’s BMU has allocated more than €70 million towardsthe development of the overhead line hybrid truck system.

The state of Hesse commissioned Siemens Mobility to build the overhead contact line system in August 2017, following Siemens’ introduction of its “eHighway” technology in 2012.

Road vehicles account for more than 95 percent of Germany’s transportation CO2 emissions, and one-third of that total comes from short- and long-distance road freight transport.

After the Hesse announcement, Greentech Media spoke to Siemens Mobility spokesperson Ellen Schramke about plans to expand and commercialize the eHighway technology in and outside Germany.

Greentech Media: In addition to the recent eHighway launch along Germany’s autobahn, there have been tests or demonstrations of the technology in Sweden and at the ports of Los Angeles and Long Beach. Where else and when — aside from the forthcoming tests in Schleswig-Holstein and Baden-Württemberg — does Siemens plan to test eHighway technology?

Siemens: There is great interest in the eHighway solution. For example, the Indian Minister for Road Transport and Highways has said he wants to introduce it to India. Many countries are keen to decarbonize road freight and are recognizing catenary electrification as a most promising option. In addition to the projects you mentioned, where contracts have already been signed, there are also serious discussions in Italy.

GTM: What does the path to commercialization look like?

Siemens: Shuttle applications (e.g., connecting ports and nearby logistics centers) are a most promising field for early commercial use of catenary systems, as these would ensure high electric mileage of the vehicles (and thus maximize the economic savings) as well as high utilization of the catenary infrastructure.

This is a point also made in a recent analysis by UC Davis on possible zero emission long-haul trucking technologies. More in-depth analysis has been made for German freight flows, where several promising shuttles routes have been identified.

The goal is, however, to also go beyond shuttle applications, and to see the linking up of the various shuttles into a large-scale network. This is expected to be facilitated by the fact that a catenary system can be used by both fully electric vehicles and hybrid vehicles. The latter ones can be interested in using the network, even before it is fully built out. The former will have a very strong economic advantage as the catenary network nears completion.

GTM: Does Siemens view the eHighway/overhead line hybrid trucks technology as a replacement for, or complementary to, all-electric heavy-duty trucks powered by batteries alone?

Siemens: In the short term, there is a role for both.

In a built-out scenario, hybrids can alleviate the “chicken and egg” situation, and long term all-electric would be at a strong advantage over hybrids. Battery electric trucks without a pantograph face the challenge of both large batteries (adds cost, weight, resources footprint) and not-so-easy charging solutions (especially above 350 kilowatts). So, although they surely will come, they are likely to be for city or regional use, not long-haul.

Looking further into the future, there are many transport technology trends (e.g., highly automated highway trucking, longer trucks or physical internet) that are likely to increase the energy need of trucks, which plays into the core strength of catenary trucking: high efficiency of electric motor without a need to stop and charge, based on mature and scalable infrastructure technology.

Siemens: No one can honestly say that their technology will be around forever. It is, however, also true that we don’t have forever to wait for a suitable battery (or hydrogen fuel cell, or something else) to come around.

The U.N. Intergovernmental Panel on Climate Change has said that to avoid catastrophic climate change, and basically a runaway greenhouse effect, it is imperative that global GHGs are cut by 50 percent by 2030. Almost no one believes that sustainable batteries, suitable for truck use and charging, will be available in sufficient quantities within that time frame.

One can of course cross their fingers and hope for the best, but there is a much more prudent option available that does not assume that new solutions will appear.

GTM: Does Siemens see overhead line hybrid trucks technology as suitable mostly for niche applications, such as connecting ports to inland warehouses or airports to distribution centers? Or does Siemens plan to scale the technology to additional applications?

Siemens: In addition to shuttles around logistics hubs, be it ports or distribution centers, it is also possible that mining transport can provide a promising early niche.