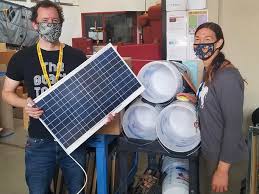 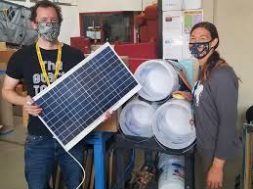 When COVID-19 grounded travelers in early 2020, Chris Brooks and his team had to cancel more than a dozen teaching contracts in Africa, Central America, a Native American reservation and other locations around the U.S.

Their nonprofit, Tacoma, Wash.-based Remote Energy, had planned to travel to the largely lower-income communities to train teachers in how to instruct students in solar panel installation. Since 2017, the group of five solar industry experts had visited 25 countries to share their clean-energy skills with teachers. Due to the global pandemic, the organization had to quickly regroup and move their lessons online. It wasn’t easy.

“I love to do stuff with my hands and teach with my hands, and most of the students like to learn that way,” Brooks said. “We’ve really had to relearn everything to be able to do this.”

As part of its move into the digital realm, Remote Energy has forged new connections for growing its outreach. This fall, the nonprofit launched a partnership with an instructor at Lake Washington Institute of Technology and the Northwest Indian College to pilot a virtual solar photovoltaic training program.

The lessons include take-home kits so the students still have the opportunity to work with their hands. The kits includes solar panels, an electrical meter and a small water pump.

“It’s been a really great activity for students to have because they are missing that [in-person] interaction,” she said. “To take something home and play around with it, it’s been really great for people.”

The 10-week program is currently being taught at Lake Washington Institute of Technology, and will be offered at Northwest Indian College in January.

Remote Energy’s focus is on smaller residential or business-scale projects, not large installations for public utilities. The nonprofit has produced its virtual introductory course, and is developing five more units that go into greater depth. Funding for the training programs come from partnering organizations and fundraising efforts. The two Puget Sound area partnerships are being supported by the Swinerton Foundation.

It’s great timing for expanding local instruction. Experts in the solar power sector say the demand for workers is strong and growing: Washington state has committed to using only clean energy by 2045 and the incoming Biden administration has pledged to make fighting climate change a top priority.

“The potential for the solar industry in the state is virtually unlimited. It’s barely been scratched,” said Bill Will, business growth and development coordinator for the Washington Solar Energy Industry Association, formerly known as Solar Installers of Washington.

Courses in solar installation are just one piece of the training needed to work in Washington. The state also requires that installers earn an electrician’s license. But the career path is still cheaper and shorter than a four-year degree, Will said, and “there’s going to be a tremendous demand for that skillset.”

There are other solar installation programs available around Washington state through colleges and training programs in partnership with electrician’s unions.

The regulations are different on tribal land, said Bostwick, and there’s great interest in the program among the Lummi Tribe near Bellingham, Wash.

“At Northwest Indian College, it’s directly relevant to energy sovereignty, which is a huge focus of the tribe,” said Bostwick. “It’s really important that we develop engineers and technicians within the community so it doesn’t have to be outsourced.”

Remote Energy is continuing to offer instruction to communities internationally through videos that can be watched via cell phone. The upside to canceling air travel and moving to distance education, Brooks said, is the much smaller carbon footprint generated by the program and more affordable courses thanks to lower expenses.

Jacinta Gatwiri participated in the nonprofit’s virtual class in June from Nairobi, Kenya. Since then, she has trained more than 70 students in solar photovoltaic installation.

She’s excited to bring carbon-free energy to Kenyan communities. The solar power is being put to use for appliances used in drying and preserving fish in seafood-focused areas, to pump water for livestock and irrigation, and for ovens used for baking.

“It is really acting as a good solution and people are starting to embrace it,” Gatwiri said.

The projects also buck social norms with women engaging in the teaching and learning.

“Culturally, people believed that these courses were courses for men, and not women,” Gatwiri said. But as they’ve seen that women often do better, cleaner installations than their male counterparts, they’re coming around, she said. Some of the solar installations she’s worked on are at schools where young girls can see women performing these jobs.

“You are motivating them,” she said. “We have the momentum.”