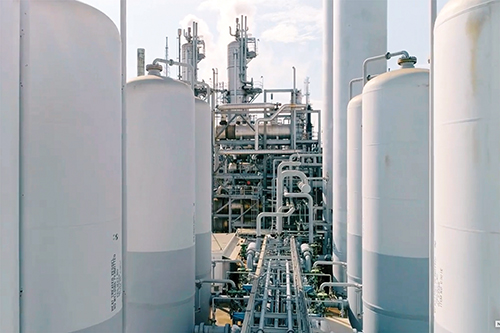 The race is on: Taking aim at a trillion-dollar hydrogen opportunity 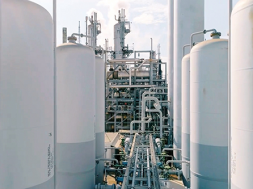 The race is on: Taking aim at a trillion-dollar hydrogen opportunity

The accelerating push to decarbonize the economy continues to lift prospects for hydrogen, a potential $2.5-trillion opportunity by 2050, according to the Hydrogen Council.

Hydrogen’s versatility as a means to store carbon-free energy and as a fuel source is attracting strong interest across transport, heating, power, and feedstock applications.

The next decade will prove out hydrogen’s ability to play a central role in the energy transition. Conventional grey hydrogen—mostly used as an industrial feedstock in ammonia, refining, and other chemical production—is produced via steam methane reforming (SMR). Low- or no-carbon routes to produce hydrogen include via electrolysis from renewable power, known as green hydrogen, or by SMR with carbon capture, dubbed blue hydrogen.

Green and blue hydrogen have been touted for years—Linde says its first studies on the use of hydrogen as a carbon-free fuel date from the mid-1970s—but it is starting from a base of near zero.

“In 2020, we estimate that $50 million was invested in low-carbon hydrogen electrolysis,” says Alex Klaessig, director with IHS Markit’s Hydrogen and Renewable Gas Forum.

“By the end of the decade, however, annual spending across all low-carbon production pathways could increase a thousandfold to $50 billion,” says Julia Wainwright, senior research analyst with IHS Markit.

Other cluster types include industrial complexes that can support refining, power generation, and fertilizer and steel production. Other candidates include port areas for fuel bunkering, port logistics, and transportation.

“The reduced costs from clusters will enable global trade in hydrogen, connecting future major demand centers such as Japan, South Korea, and the European Union to regions of abundant low-cost hydrogen production means like the Middle East, North Africa, South America, or Australia,” according a Hydrogen Insights 2021, released in February by the Hydrogen Council.

IHS Markit estimates capital spending of up to $265 billion in low-carbon hydrogen production by 2030. Electrolyzers, which convert water to hydrogen using renewable energy, will take the lion’s share at $165 billion with $100 billion spent on SMR with carbon capture, Wainwright says. Europe is expected to dominate early investment owing to initiatives such as the EU Green Deal.

There is upside from that target. A broader and more rapid global embrace of decarbonization targets could boost capital spending to $1.2 trillion by 2030 (chart).

As of early 2021, over 30 countries have released hydrogen roadmaps, according to the Hydrogen Council, led by Europe. The group estimates that 228 large-scale projects have been announced along the value chain, with 85% located in Europe, Asia, and Australia. Governments have pledged more than $70 billion and new capacity targets to support hydrogen initiatives.

For example, the EU has announced a 40.0-gigawatt (GW) electrolyzer capacity target for 2030, up from less than 0.1 GW today.

Bringing down costs for renewable hydrogen will be key to accelerating growth. Cost projections continue to fall more swiftly than expected, according to a February report by the Hydrogen Council. Three factors are driving the drop. First, capex requirements are dropping. “We expect a significant electrolyzer capex decline by 2030 to about $200–250/[kilowatt] at the system-level,” according to the Hydrogen Council. That is 30–50% lower than just last year owing to accelerated cost roadmaps and a faster scale-up of electrolyzer supply chains. Renewable energy costs are also dropping as much as 15% against year-ago forecasts, led by regions with high solar irradiation, including Spain, Chile, and the Middle East. Utilization levels continue to increase, improving economies of scale.

Gas makers stake claim
Industrial gas makers say they are well positioned to capture new low- and no-carbon hydrogen applications, but they are far from alone. Other chemical and fertilizer makers, oil and gas majors, utilities, renewable energy producers, transport, pipeline, electrolyzer, other equipment and service providers, and new entrants also have hydrogen in their sights.

Air Products CEO Seifi Ghasemi said the company’s interest extends far beyond the current market for grey hydrogen as an industrial feedstock. “We consider hydrogen to be a core competency for Air Products,” Ghasemi said. “We have been producing merchant hydrogen for 60 years. We’re good builders and we’re good operators.”

The NEOM ammonia joint venture (JV) will be owned equally by the three partners. The facility will be powered by over four GW of renewable power from solar, wind, and storage to enable production of up to 650 metric tons/day of green hydrogen. Air Products will fully-own a distribution network to supply green hydrogen to customers worldwide.

The investment in the distribution network is put at $2 billion. The EU has set a target of 40 GW of renewable hydrogen electrolyzers installed within its borders by 2030, essentially a call for 10 projects on the scale of NEOM.

In 2018, Air Products announced a plan to invest at least $15 billion in high-growth gases projects over five years. “We’re just halfway through and have already committed $15 billion,” Ghasemi said. The company will announce an updated five-year target in July.

Air Liquide last month estimated that its hydrogen sales will triple by 2035 supported by €8 billion of capital expenditures. “We believe that the supply chain challenges are often underestimated by new entrants in the hydrogen industry,” Matthieu Giard, Air Liquide, vice president/hydrogen, said at the company’s sustainability day last month.

“Our 50 years of experience have shown us just how difficult it is to handle, store, and transport hydrogen at very high pressure or extremely low temperatures.”

Air Liquide estimates that by the time it reaches its 2050 carbon neutrality target that 18% of global energy demand in the world might be met with hydrogen. “We will leverage our expertise to develop a competitive low-carbon hydrogen and decarbonization offer at large scale, helping our customers to decarbonize their own processes,” Giard said.

Industrial gas makers must also decarbonize their own production, including grey hydrogen. Air Liquide said its 10 largest SMRs account for more than 40% of its scope 1 direct greenhouse (GHG) emissions, giving it a clear path to meet its 2035 emissions targets.

Air Products has a clear roadmap of how to decarbonize all of its grey hydrogen, Ghasemi says. “It will happen when the economics allow it.”

CF Industries will integrate the carbon-free hydrogen generated by the electrolysis plant into existing ammonia synthesis loops at Donaldsonville.

Ammonia is one of the most efficient ways to transport and store hydrogen and is also a fuel in its own right, says Tony Will, president and CFO of CF Industries.

CF is the world’s largest producer of ammonia and with an existing manufacturing and distribution network is well positioned to meet demand for hydrogen and ammonia from green and low-carbon sources.

The company sees opportunity to extend its position in industrial operations, including applications such as power generation and marine transport. “We’re having good discussions with a number of partners for a bunch of different end-use applications.”

The green ammonia plant is expected to be the largest of its kind in North America when complete. CF Industries will allocate renewable energy purchased across its network from available grid-connected sources to match 100% of the electricity needed by the electrolyzer.

The electrolyzer will be integrated into existing ammonia plants at Donaldsonville where atmospheric nitrogen will be fixed with the carbon-free hydrogen to produce green ammonia.

Energy firms are also lining up. ExxonMobil formed a low-carbon business last month and is targeting a leading position in what it views as a $1-trillion addressable market by 2040, noting that hydrogen can decarbonize hard-to-abate sectors where oil and gas now play.

Australia last week announced plans to invest an additional A$539.2 million ($416.9 million) in clean hydrogen and carbon capture projects . The federal government will spend A$275.5 million to accelerate the development of four additional clean hydrogen hubs in regional Australia and implement a clean hydrogen certification scheme.

Asset manager FiveT Capital (Zurich, Switzerland) has announced a €1.0-billion ($1.2 billion) infrastructure fund for clean hydrogen investment. “The fund wants to act as a catalyst, stimulating both supply and demand in parallel to accelerate scale-up, competitiveness, and returns,” says Pierre-Etienne Franc, FiveT Hydrogen Fund CEO and former vice president of Air Liquide’s hydrogen energy activities. “As a next step, the fund will also invest in technologies and companies contributing to this purpose.”

Early investment will mostly focus on replacing grey hydrogen with clean hydrogen in existing uses such as refining and chemical feedstock, “which is key to build-up scale, reduce costs, and establish baseload infrastructure,” Franc says.

“The beauty of hydrogen is in its versatility,” Franc adds. “Hydrogen can be both competitive and a key component of the energy transition in many applications including steelmaking, heavy-duty transportation, and renewable electricity exports, offering huge room for new projects and infrastructure to grow, globally.”

Franc expects a fast-mover advantage in hydrogen. “Like early development in renewable electricity, we expect early movers in clean-hydrogen infrastructure to be able to secure the best returns, building up scale early and securing a strategic position for ‘ecosystem’ development,” Franc said. “The opportunity is huge both from a financial and a climate standpoint, and the time is now.“

Ghasemi is also convinced there will be a significant first-mover advantage in hydrogen. “If we can find 10 big projects, and the returns and market demand is there, we can raise the cash,” Ghasemi said. “You could see Air Products becoming five times its size in the next 15 years. There is no limit. It is a brand new market and a huge opportunity. We want to be the leader.”

Ghasemi cites the development of the auto industry as an example. In 1908, there were 253 US automakers according to the Henry Ford Museum. By 1929, the Big Three, Ford, GM, and Chrysler, accounted for more than 80% of US auto production. “I don’t think this will play out much differently.”