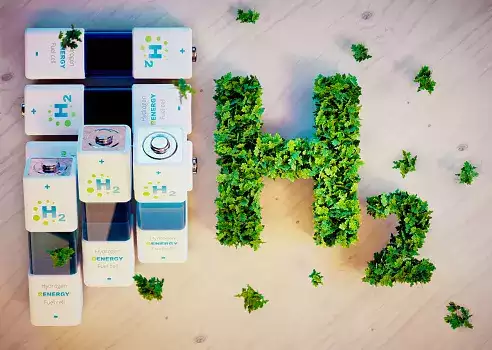 The growing clamour around renewable H2 ignores some harsh realities that will limit its role in the energy transition — not least the laws of physics, writes Andreas Biermann

Green hydrogen is being heavily promoted by some quarters of the energy world, with some saying it is the only way to achieve deep decarbonization in hard-to-abate sectors, while others label it as pie-in-the-sky “hopium”.

While, as is often the case, one could expect the truth to be somewhere in the middle, my view is that this is not the case here, due to a combination of factors:

The need to achieve rapid large-scale carbon reductions by 2030; the lack of positive network effects — ie, improvements to the value of a service as more people sign up — supporting green hydrogen; and physics.

Let’s take these in turn.

The Need for Speed

The International Energy Agency notes that in order to reach net zero emissions by 2050, global CO2 emissions from energy and industry need to decline by 41% from their 2019 level — from 36 billion tonnes to 21 billion tonnes — in the next nine years. Thereafter, the remaining 59% can decline at a much shallower, but still ambitious, curve over two decades, to reach net zero by 2050.

The implications of this are clear to anyone who has worked in the energy sector and observed the failure to take up other purported technological climate solutions, such as carbon capture and storage (CCS). There is never a rapid transition, instead we are looking at timeframes measured in decades, rather than years, for any new approach to become dominant. Any technology that is not currently available at scale in whichever market it is supposed to serve is unlikely to play a substantial role in pre-2030 decarbonization.

For hydrogen, this means that the absence of scaled-up cost-effective electrolyser capacity drawing on dedicated renewable energy supply, and the absence of hydrogen delivery chains, rules it out as a contributor for the first 40% of decarbonization. This has consequences for the next 60%, as it is in the current decade that the pathways to 2050 net zero will be defined.

There is no mass-market green hydrogen-based solution for, well, anything right now.

The urgent demand for low-carbon transportation, heating, and other applications that at least in theory could be supplied by green hydrogen, is therefore being serviced by electric solutions based on increasing volumes of renewable electricity and storage. Demand for these solutions — such as batteries, electric vehicles and heat pumps — will rapidly increase in the run-up to 2030, as network effects reinforce their usage and development, bringing down costs through technological advancement and economies of scale.

Looking at applications, the sales numbers of battery-electric vehicles (BEVs) compared to hydrogen fuel-cell electric vehicles (FCEVs) speak for themselves, and it is not just consumers but also vehicle manufacturers who are voting with their feet.

Passenger and light utility vehicles are the canary in the coal mine.

Applications that not so long ago were seen as a slam-dunk for hydrogen are now being encroached upon by the increasing capabilities of batteries. Grid-level storage? Same-day peakers, power management and short-term load-shifting have already gone to batteries, and for the remainder, pumped hydro and other long-duration energy storage technologies are competing with hydrogen.

Home heating? That would require a wholesale rebuilding of gas networks, along with increased heating costs that will be hard to stomach for politicians who already are panicking over current energy prices.

Trucks? BEV trucks are expected to be cost-competitive with diesel trucks in all major European markets by the mid-2020s, meaning they will be cheaper than FCEV trucks.

Shipping? Coastal and short-range shipping is now much more likely to go to batteries than hydrogen, as the first battery-operated vessels have already been launched.

Airplanes? Batteries are more likely than not to give hydrogen a serious run for its money on short-haul aviation, and nobody expects a hydrogen-powered medium-haul aircraft this side of the late 2030s.

More importantly, we are still at the start of technological developments in battery applications, and it is far more likely that the increasing capability/reducing cost of batteries — combined with the strength and reach of the electricity network — will continue to win out, rather than energy users ditching electrification in favour of hydrogen.

There will almost certainly be applications with high potential for green hydrogen — in industry, steelmaking, cement production possibly, and maybe seasonal grid storage. But these are limited in scope and exposed to competing technology solutions. They are a far cry from predictions of a wide-ranging ‘hydrogen economy’.

Electrification network effects therefore lead to the market for green hydrogen constantly shrinking, when what would be needed from the point of view of hydrogen promoters is to expand it.

Finally, green hydrogen cannot escape the limitations imposed by physics. Along the whole delivery chain, it is a very inefficient fuel, even if electrolysers operate at the boundary of thermodynamic realities.

Compression, transport and storage losses, as well as conversion losses in fuel cells, all add up. This means that substantially greater amounts of electricity would need to be expended on the production of green hydrogen to achieve the same end-user impact as the direct use of electricity would have.

This takes us back to the initial point of the need for rapid decarbonisation – how much firm green electricity will we have available to utilise prior to 2030 to produce green hydrogen? Looking at even the most ambitious plans across the world, it appears clear that whatever there is could not support a green hydrogen economy by then.

The above observations leave hydrogen promoters with one hope – so-called blue hydrogen, produced by steam reforming natural gas, with CCS.

There are two issues with this.

First, CCS is practically non-existent, and permanent storage of CO2 (as opposed to it being used for enhanced oil recovery) is even rarer.

So, to deliver blue hydrogen at scale over practically non-existent supply networks into non-existent applications, a non-existent technology solution is required.

Secondly, even if all of this could be conjured into existence by sheer willpower, it is still not carbon-free. Methane leaks and physical limitations to CCS of the steam reforming process combine to make this, at best, a low-carbon technology and one that is in any case unlikely to be cheap enough to compete with direct electrification.

So the use cases for green hydrogen are shrinking rapidly, while in parallel the potential green electricity surplus needed to produce it is shrinking as well, while green hydrogen technology applications are not ready for mass-market utilization in any sector.

Instead, we remain at prototype stages with anything offered into the market being heavily subsidized by the seller — such as the $15,000 of free H2 fuel offered by Toyota to buyers of its Mirai FCEV — and green hydrogen thus won’t be able to contribute at any meaningful level prior to 2030, which means that it is unlikely to be a desirable solution thereafter.

It is instructive to see who is promoting hydrogen as a solution. It is the fossil fuel industry’s energy transition energy carrier of choice, just as CCS was a decade ago. I expect it to fare just as well.

We need to decarbonize rapidly, requiring a societal effort not dissimilar to that of confronting the enemies of democracy in 1939-45 – anything that doesn’t help is superfluous.

Anything that actually gets in the way should be ditched to allow us to focus on workable solutions.

While the argument that we need to back all the possible solutions is often advanced in favour of green hydrogen, as noted above, it is not part of the solution prior to 2030, and after 2030 electrification pathways will have been defined that mean it won’t be a significant part of the solution then either.

Our money is better spent elsewhere.

Andreas Biermann has 25 years of experience in energy and climate finance, including at the UK Energy Saving Trust, the International Energy Agency, the European Bank for Reconstruction and Development and the Green Climate Fund. He now works for Globalfields Ltd, a boutique climate finance consulting firm based in London. The opinions in this article are his own and do not necessarily reflect those of his employer.