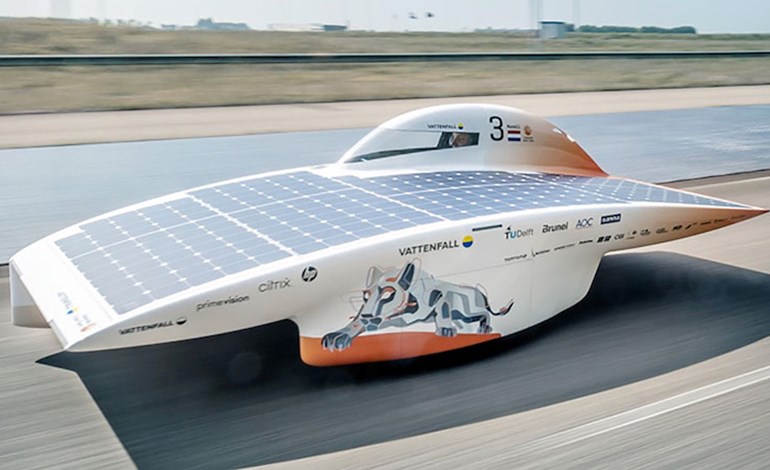 The Nuna11 is a tricycle with two wheels are on the right and one wheel on the left.

The Vattenfall Solar team has unveiled its latest solar vehicle, the Nuna11, which is a tricycle with an inclined solar collector.

Vattenfall said the third wheel is arranged in an unusual way, which the team hopes will help the vehicle to beat the world’s best at the Solar Challenge Morocco in autumn.

Two wheels are on the right and one wheel on the left.

Team leader Christiaan Wiers said: “In conventional three-wheeled vehicles, the third wheel is in the middle in front of or behind the paired wheels.

“The air has to flow around the wheels in three different places.

“The positioning of the two wheels on the right in front of and behind the driver and one wheel on the left only creates air resistance in two places.

“This is the most aerodynamic shape imaginable.”

The design is known as a catamaran in the world of solar racing vehicles.

With the previous models Nuna9 and NunaX, the Vattenfall Solar team has already shown that it knows how to use the wind to its advantage.

Due to the special construction of Nuna11, the design is now combined with less rolling resistance due to the only three wheels, the team said.

Wiers said: “This way we generate more downforce on the left wheel. This gives the vehicle more stability in stronger winds, making it faster and safer.”

However, the arrangement of one wheel on the left and two wheels on the right presented the team with a certain challenge in terms of steering, said Thies Postma, one of the drivers.

Postma said: “The wheels are not on the same axle, as is usually the case with solar vehicles. Nevertheless, they have to work well together so that you can get through the corners well.

“To implement the vision of optimal aerodynamics into reality, a lot of thought and creativity was required.”

The Vattenfall Solar team wants to take part in the Solar Challenge in Morocco with the Nuna11 in October and hopes to cross the finish line as the winner again after winning seven golds in Australia and three golds in South Africa.